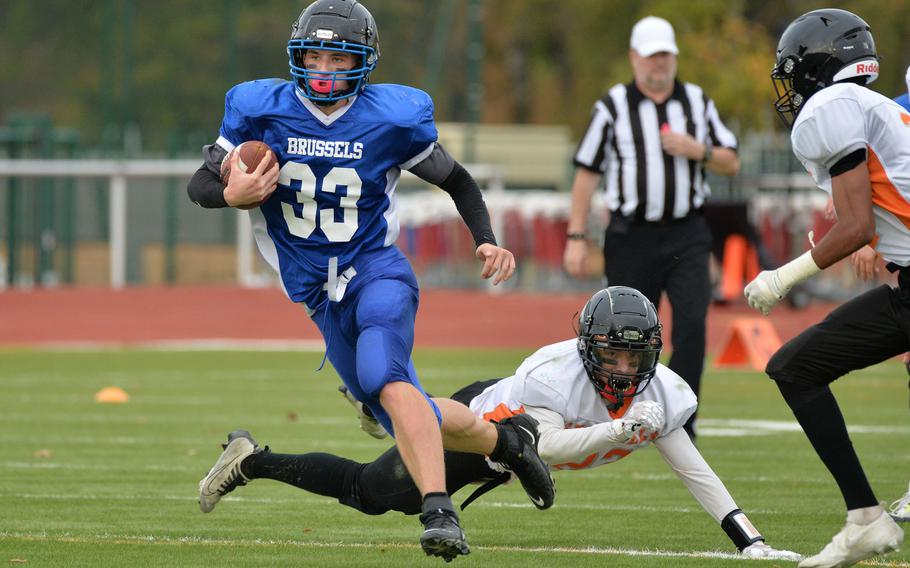 Brussels’ William Pierce gets past a pair of Spangdahlem defenders on his way to a touchdown in the DODEA-Europe Division III football final in Kaiserslautern, Germany, Oct. 29, 2022. Brussels won 64-48. (Michael Abrams/Stars and Stripes)

KAISERSLAUTERN, Germany – The Brussels Brigands spent their first moments as champions serenading one of their teammates with a birthday song in the end zone.

They just had defeated the Spangdahlem Sentinels 64-48 in the DODEA-Europe Division III title game at Kaiserslautern High School, but the Brigands took a moment to celebrate quarterback Isaiah Rivera, who couldn’t step on the field due to an injury.

“He’s been here every practice, a very valuable part of our team and it’s great to give back a little bit,” Brussels’ William Pierce said.

The Brigands gave Rivera a great birthday present with the championship and an undefeated record, one year after completing a one-win season.

And Pierce played a big role in securing that title.

Spangdahlem had no answer to stop the Brussels senior. Pierce burst through tackles, such as a 55-yarder at the 7:19 mark in the first quarter where he bounced to the outside and broke a couple of tackles en route to pay dirt, the 62-yard score where he cut back inside and a 48-yard run at the 7:35 mark in the fourth quarter where he powered through the Sentinel defense.

He also sped around the outside to go untouched on his first touchdown on the Brussels’ first play of the game. The offensive player of the game took a pitch and left the Spangdahlem defense in his dust.

Sawyer Ter Horst, the defensive player of the game after picking off two passes, complemented Pierce with 140 yards and two touchdowns on 15 carries. 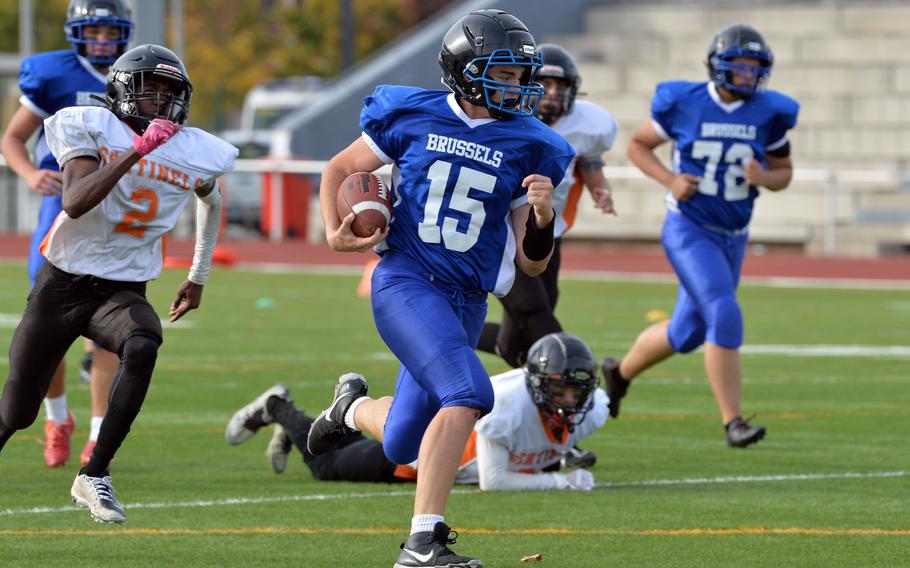 Brussels’ Sawyer Ter Horst scampers for a big gain in the Brigands’ 64-48 win over Spangdahlem in the DODEA-Europe Division III football final in Kaiserslautern, Germany, Oct. 29, 2022. (Michael Abrams/Stars and Stripes) 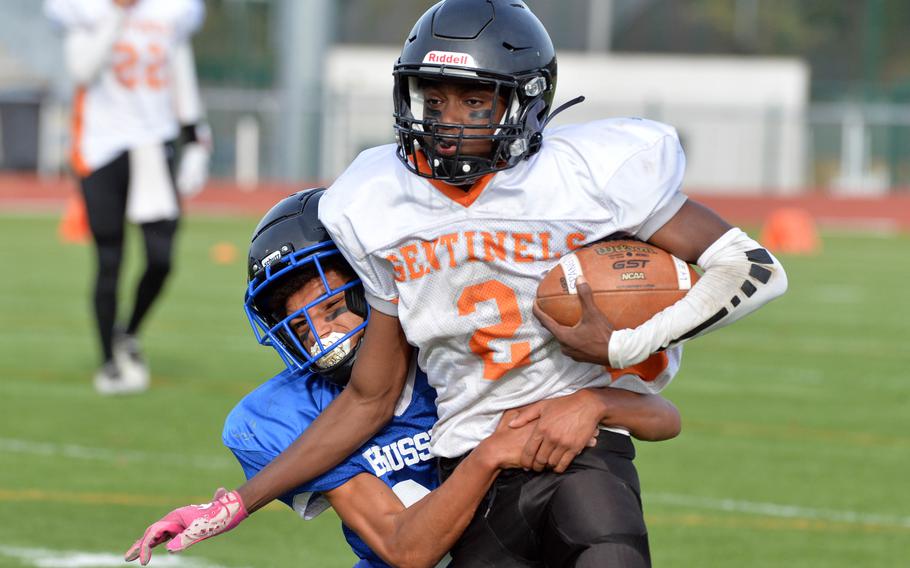 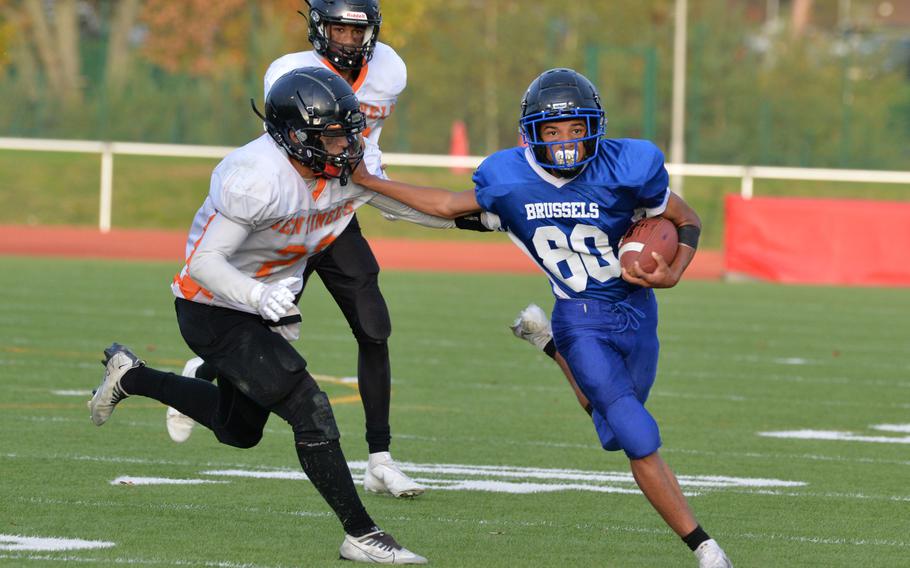 Brussels’ Charles DeMarkus keeps Spangdahlem’s Casey Supinger at a distance on his way to a touchdown in the Brigands’ 64-48 win over Spangdahlem in the DODEA-Europe Division III football final in Kaiserslautern, Germany, Oct. 29, 2022. (Michael Abrams/Stars and Stripes) Brussels quarterback Wilson Stewart hands off to running back Sawyer Ter Horst in the Brigands’ 64-48 win over Spangdahlem in the DODEA-Europe Division III football final in Kaiserslautern, Germany, Oct. 29, 2022. (Michael Abrams/Stars and Stripes) William Pierce and and Sawyer Ter Horst of Brussels celebrate a 64-48 win over Spangdahlem in the DODEA-Europe Division III football final at Kaiserslautern, Germany, Oct. 29, 2022. (Michael Abrams/Stars and Stripes)

First-year Brussels coach Andrew Langenstein praised Pierce not only for his unstoppable performance, but also for what he described as the little things. He mentioned Pierce’s leadership, willing to pick up his teammates after each play, among others.

“I would say I was surprised, but I’m not,” Langenstein said of Pierce’s performance. “He does it week in and week out. It’s almost become what we expect to see from someone of his caliber.

“What he did today is quite an accomplishment.”

The Brigands also took advantage of a weakness they saw on kickoffs, with the Brigands recovering four kicks.

Two came on the first two kicks of the game, as Brussels jumped out to a 12-0 lead before the Sentinel offense took a snap.

Another happened in the third quarter when Brussels’ Jabriel Wells recovered the ball at the Sentinel 35-yard line following a 83-yard touchdown by Ter Horst. Two plays later, Pierce punched in a 26-yard score to turn a four-point deficit to a 42-32 lead.

The last came in the fourth quarter, but a fumble two plays later kept the Brigands from scoring in quick succession.

“We knew we had an advantage in the kicking game,” said Langenstein, who credited kicker Matej Marinkovic for his best game of the season. “We wanted to expose that aspect of the game. We know what we can do on offense and defense, and we worked all season to do the same thing on special teams. Just so happens today is the day that it came out the way it should be.”

Despite the continual scoring early by Brussels, the Sentinels took a 32-28 lead into halftime.

A flurry of action over the final 40 seconds ended up with Spangdahlem on top. First, Spangdahlem junior Markario Drummond ran in a touchdown from 45 yards out, and the Brigands answered with Pierce’s 62-yard score. Then, as time expired, Sentinel quarterback Casey Supinger hit Drummond on the sideline for a 37-yard touchdown.

In the fourth quarter, however, Spangdahlem couldn’t keep up, as Brussels pulled away.

“They have never given up all season,” Spangdahlem coach Terry Hoffman said. “We talked to them about how they came together, and they have managed to fight and fight and fight. We’re really proud of the boys and what they did today.”

As for Brussels, the championship marked quite a turnaround for the program. For seniors like Pierce, it definitely was a sweet way to go out after the lows of the previous season.

“It feels amazing,” Pierce said. “We’ve been working all year of that crown, so it’s definitely great to bring it back and end with a banger, especially for my senior year.”