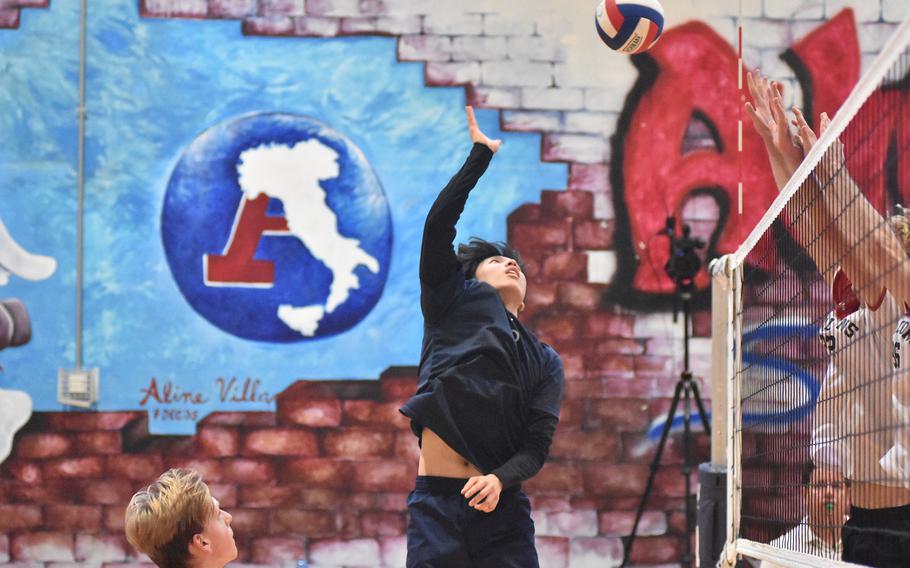 Black Forest Academy's Josh Jung, named the tournament's most valuable player, scores the match's second-to-last point on a dink over the American Overseas School of Rome defensive block on Saturday, Oct. 29, 2022. Jung would score a kill on the next point, ending the match. (Kent Harris/Stars and Stripes)

AVIANO AIR BASE, Italy – Josh Jung made one notable mistake at the DODEA-Europe boys volleyball championships.

Actually, he made it before the event began.

“He forgot his jersey,” Black Forest Academy coach Lance Dockrey said Saturday after the Falcons defeated the American Overseas School of Rome 25-16, 25-19, 26-24 for the title.

Jung, sporting the No. 13, was named the most valuable player and fittingly scored the last two points of the match.

Jung has played three years at the international school in Kandern, Germany, and has never lost a match in volleyball. Basketball and track are another story.

“And basketball is my sport,” Jung said. “Maybe we can have the same kind of success in basketball.”

If the rest of his teammates play basketball as well as they do volleyball, that can’t be ruled out. Several other Falcons could have been named MVP. Sophomore Timothy Sivonen starred both at the net and the service line. Team captain Joey Ebenroth might not have made a bad set during the match. Peter Cagwin, Boston Dockrey and Ethan Hernandez would be stars on any other team in the tournament. 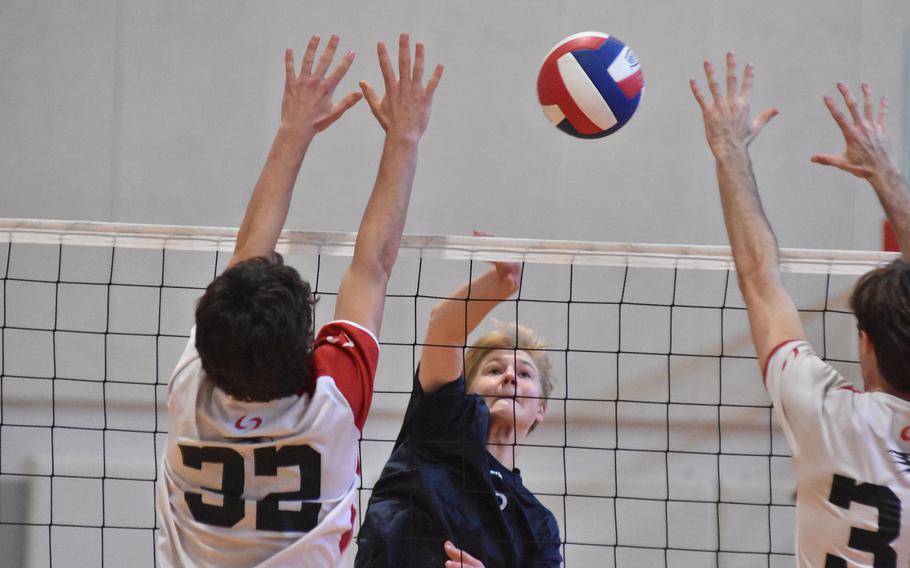 Black Forest Academy’s Timothy Sivonen tries to get the ball past the American Overseas School of Rome block of Aureliene Berthet, left, and Thomas Brown-Samper during the championship match of the DODEA-Europe boys volleyball tournament Saturday, Oct. 29, 2022. (Kent Harris/Stars and Stripes) 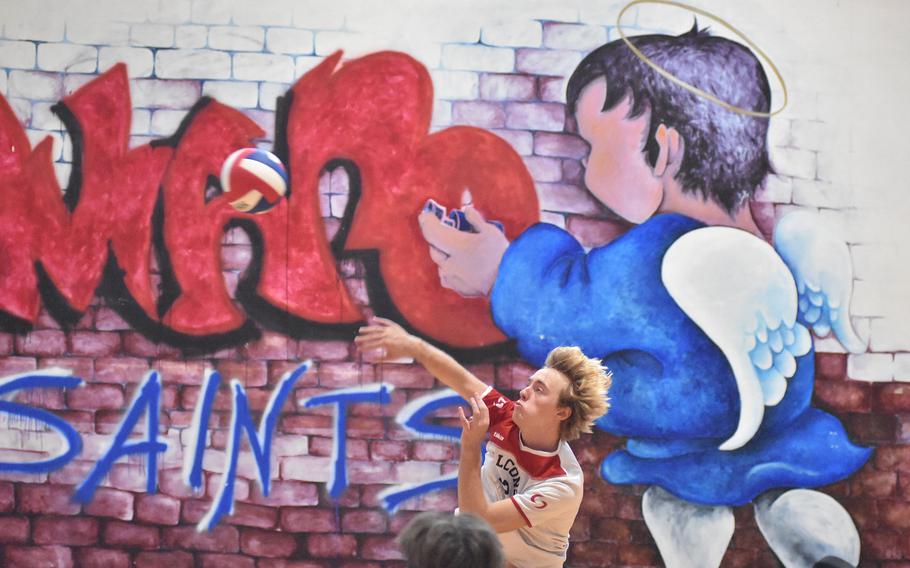 American Overseas School of Rome’s Parker Huber has a Saint watching over his shoulder as he sends the ball across the net to Black Forest Academy on Oct. 29, 2022. (Kent Harris/Stars and Stripes) 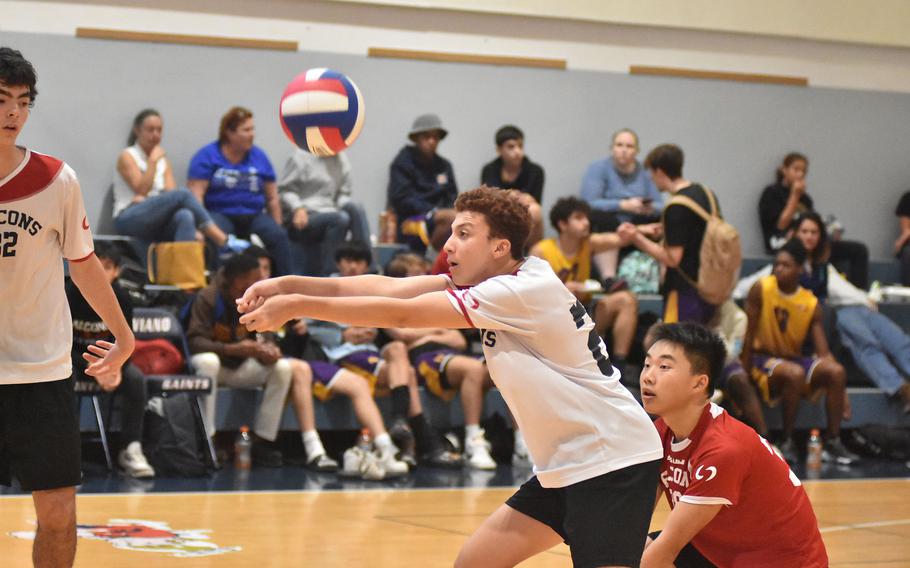 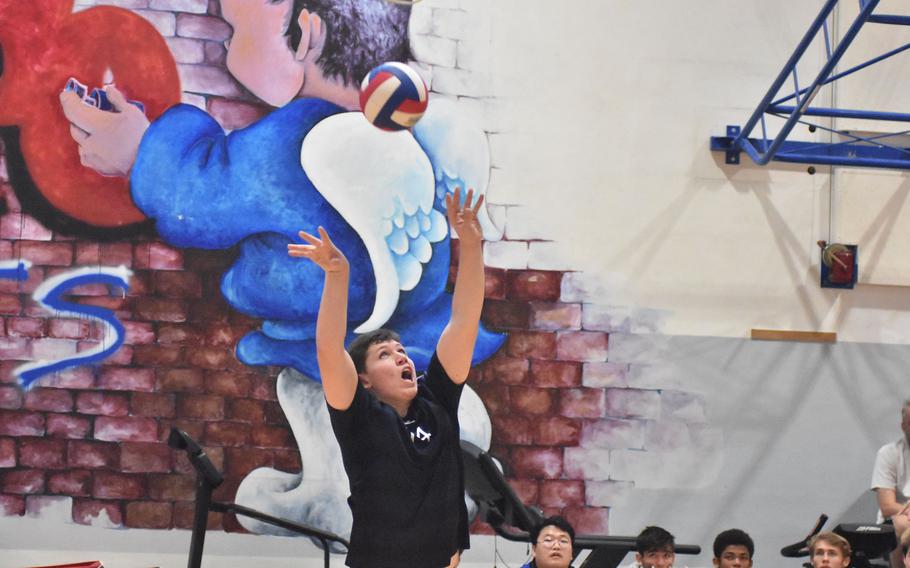 Black Forest Academy’s Joey Ebenroth sets the ball up for a teammate Saturday, Oct. 29, 2022, in the championship game of the DODEA-Europe boys volleyball tournament at Aviano Air Base, Italy. (Kent Harris/Stars and Stripes) 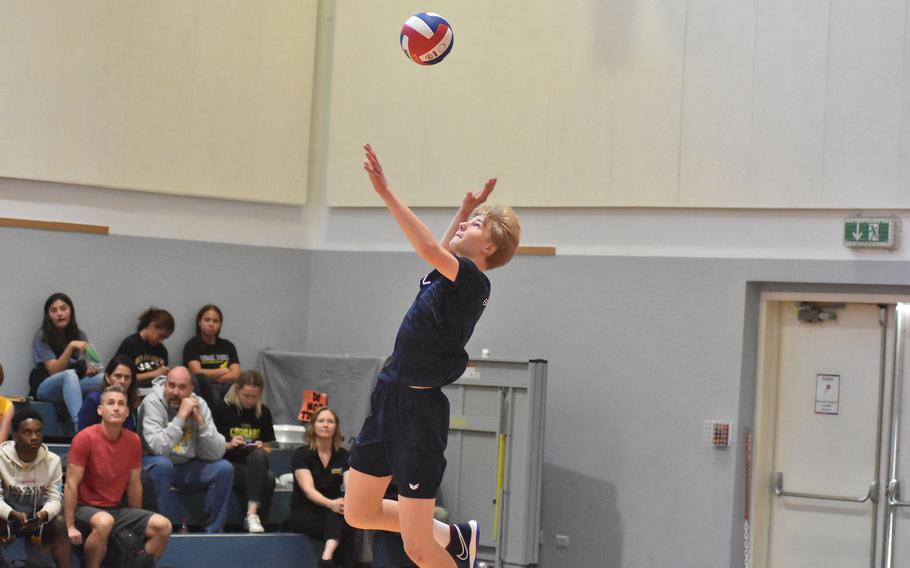 But while some might think that AOSR coach Andrea Desideri had seen enough of the Falcons for a while, that didn’t appear to be the case.

“I want to see them every year,” Desideri said, advocating for expanded opportunities during the season to get his players more experience against quality competition.

His Rome-based team, also bearing Falcons as mascot, finished middle-of-the-pack among the handful of schools playing boys volleyball in Italy. But getting to play six matches in three days was a difference maker.

“They grew up,” he said with a smile. “They didn’t grow up fast enough. But it was close.”

It could have been even closer if Black Forest hadn’t gotten off to strong starts in the first two sets, taking 7-1 leads before AOSR seemed to get focused. The teams largely traded points after that, but AOSR had too big a hole to climb out from.

That wasn’t the case in the third set, when the two teams played evenly throughout. It was tied at 19-19 before Sivonen and Cagin put BFA on top with consecutive kills. BFA eventually got the serve back to lead 23-22. Jung then lobbed a ball over the AOSR block that couldn’t be returned and followed that with a rocket that landed untouched on the court to start the celebration.

“I think the thing that separates us is the ability to bounce back from our mistakes,” Lance Dockrey said. “I’m really proud of the guys for being able to do that.”

AOSR senior Parker Huber, who like Chung will also start dribbling a basketball in earnest now, kept the Falcons in the contest. He finished with nine kills, four blocks, a pair of aces and two dinks that scored points. Sophomore Aurelien Berthet had seven kills and senior Anthony DiMatteo three aces and three blocks.

Sivonen, Ebenroth, Huber and Berthet were all named to the all-tournament team along with Sigonella’s Teven McCarthy and Andrew Martin and Aviano’s Gabriel Fabbro.