AOSR edges Sigonella to get shot at BFA 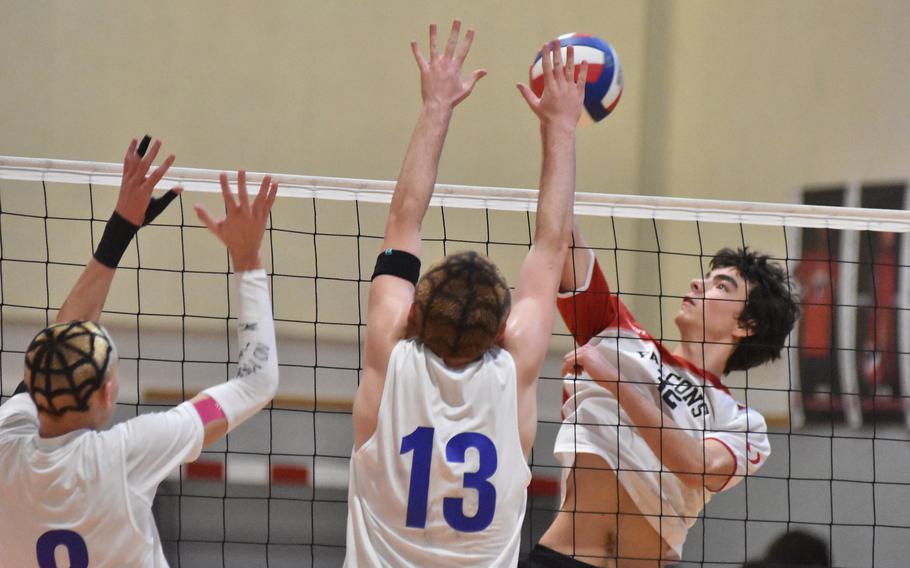 American Overseas School of Rome's Aurelien Berthet tries to get past the ball past the webbed heads of Sigonella's Christopher Hedemand, left, and Levi Wilhelm on Friday, Oct. 28, 2022. Kent Harris/Stars and Stripes ()

AVIANO AIR BASE, Italy – It was the match of the tournament, one that left the losers heartbroken and the winners facing a very tough task in Saturday’s championship.

“We played with energy,” Falcons star Parker Huber said after the emotional win. “If we play with energy, I know we’re going to be good.”

Just good enough to defeat the Jaguars, who looked like they had momentum going into the final set.

Sigonella, seeded second and winner of Pool B, took a 4-1 lead early in the final set. But AOSR, seeded fifth and the runner-up in Pool A, rallied and the teams exchanged small runs before eventually moving into a 13-13 tie. The Jaguars then lost a point for running into the net and seconds later, an AOSR serve landed the line – abruptly ending the match and sending the Falcons running around their side of the court and several Sigonella players collapsing in misery.

For their efforts Friday, AOSR gets to take on Black Forest Academy, which was clearly the best team of the tournament its first two days. The Falcons from Kandern, Germany, swept Rota 25-13, 25-11, 25-17 in the other semifinal. 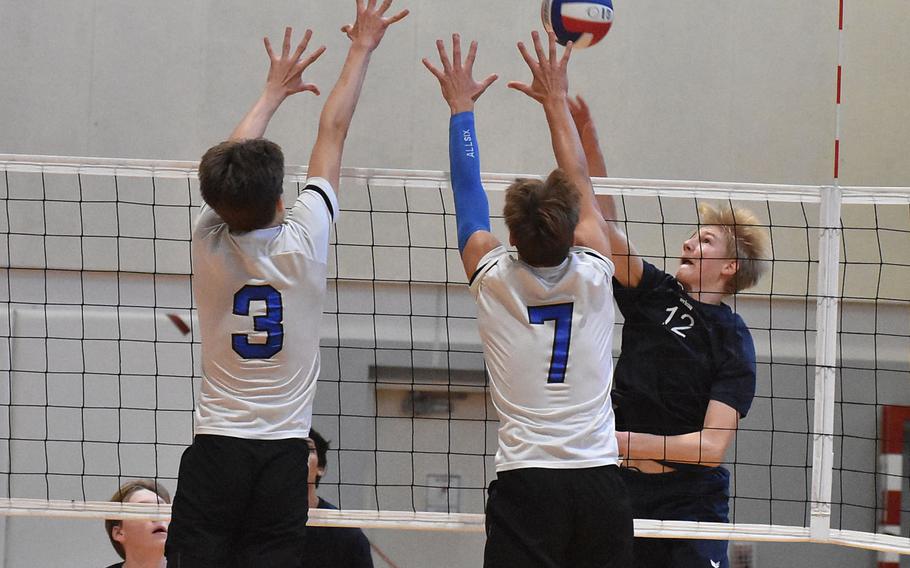 Black Forest Academy's Timothy Sivonen tries to get the ball past the Rota block of Hampton Brasfield, left, and Christian Weaver in the Falcons' semifinal victory on Friday, Oct. 28, 2022. Kent Harris/Stars and Stripes () 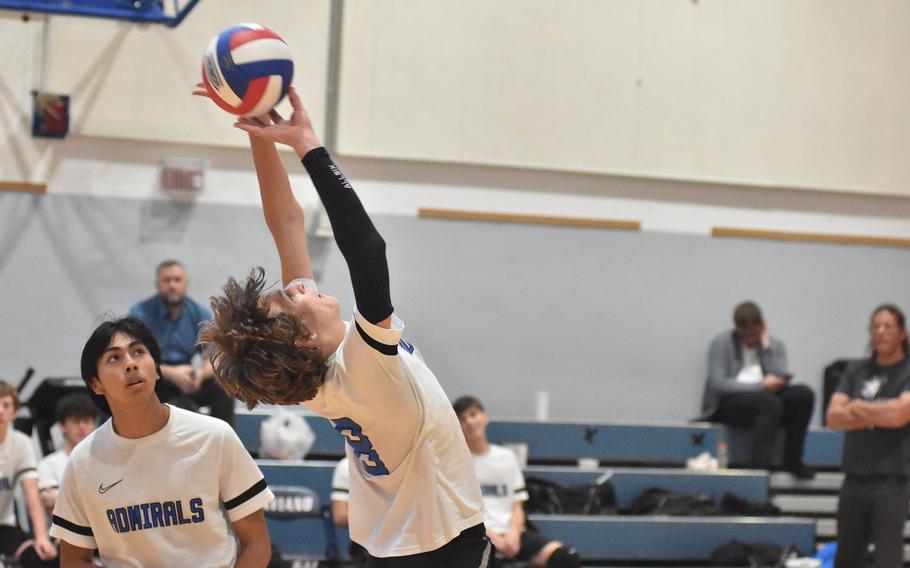 Rota's Tyler DeMeritt sets the ball backwards over the net in the Admirals' semifinal loss to Black Forest Academy on Friday, Oct. 28, 2022. Kent Harris/Stars and Stripes () 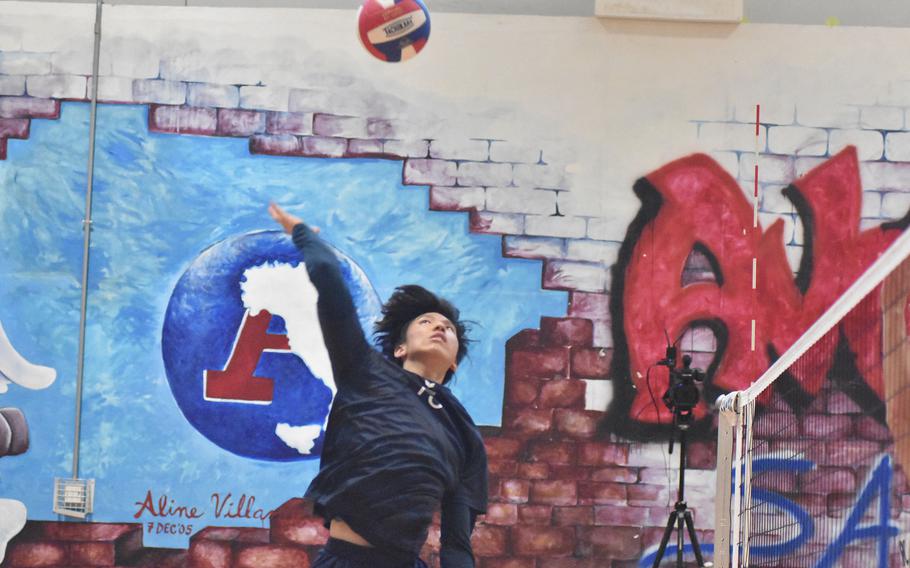 Black Forest Academy's Josh Jung goes up for a kill Friday, Oct. 28, 2022, in the Falcons' semifinal victory over Rota. Kent Harris/Stars and Stripes () 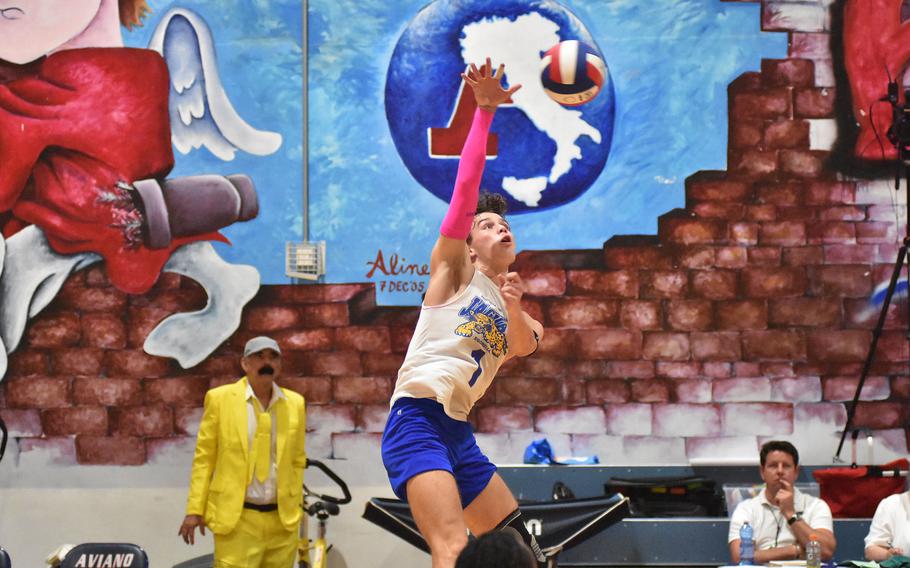 Sigonella's CJ Davis leaps before connecting with the ball in the Jaguars' semifinal loss to American Overseas School of Rome on Friday, Oct. 28, 2022. Kent Harris/Stars and Stripes () So an improbable win by the team from Rome in the battle of Falcons could happen.

“It seems like everyone else in this tournament beat us during the season,” Huber said, exaggerating only slightly. “But we’ve come together now.”

Coach Andrea Desideri said he thought the difference in his team’s winning and losing sets was pretty simple.

“When you start to miss some serves, that’s it,” he said. “We missed three in a row at one point. You don’t score and the other team does …”

Black Forest, which has lost only a single set the entire season in a schedule heavy with international schools, coasted through the first two sets before the Admirals put up a stiffer fight in the third.

“I thought we came out strongly,” Falcons coach Lance Dockrey said. “We defended well, we attacked well. We just had a bit of a let down in the third set.”

Rota made an improbable run to the semifinals in only its second year of competing – following a winless season a year ago.

“I am so proud of this team,” coach Edward DeMeritt said. “Most of our best players are juniors and we only have one senior starter. So maybe next year is our year.” 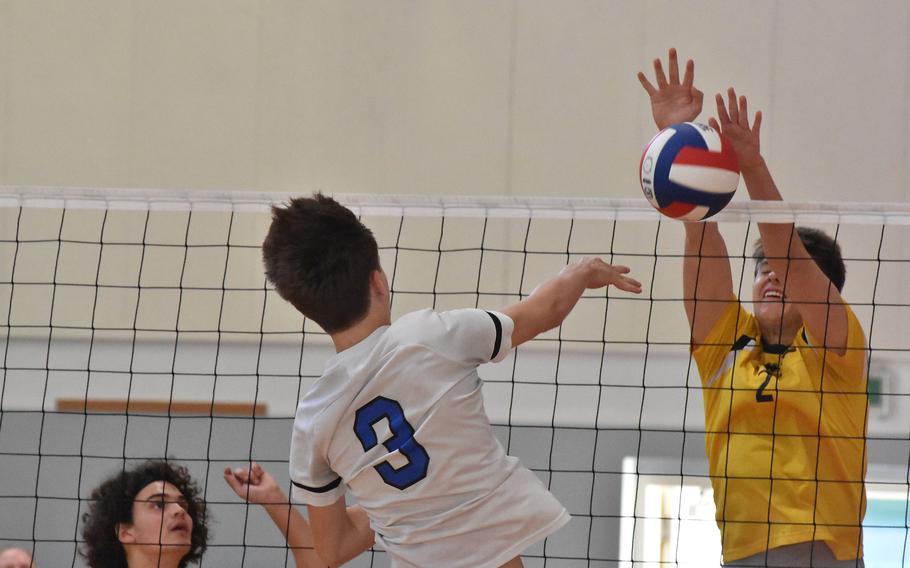 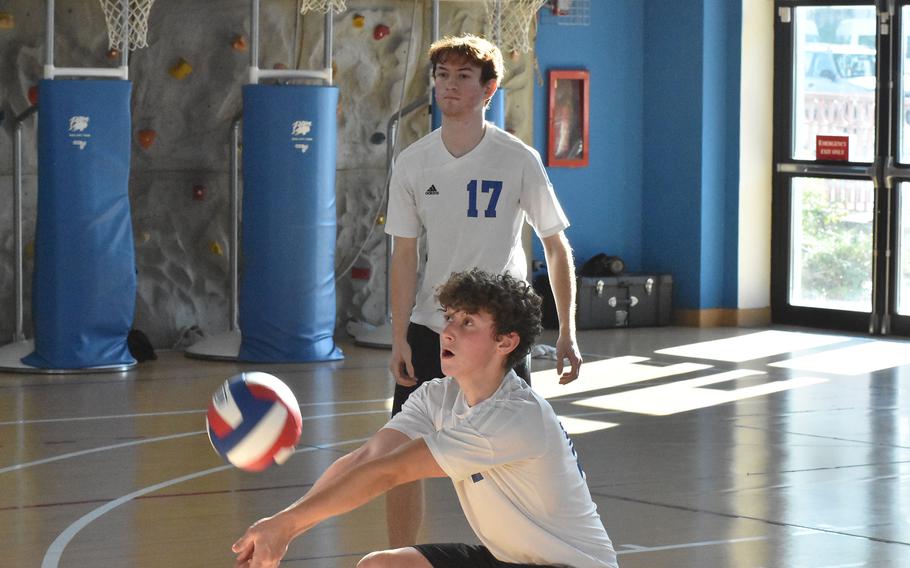 Hohenfels’ Gavyn Jett crouches to return a shot during the Tigers’ match with American Overseas School of Rome in pool play on Friday, Oct. 28, 2022. The Tigers won the first set in boys volleyball in school history during the match. Kent Harris/Stars and Stripes ()