Aviano, AOSR to meet again - with title on line this time 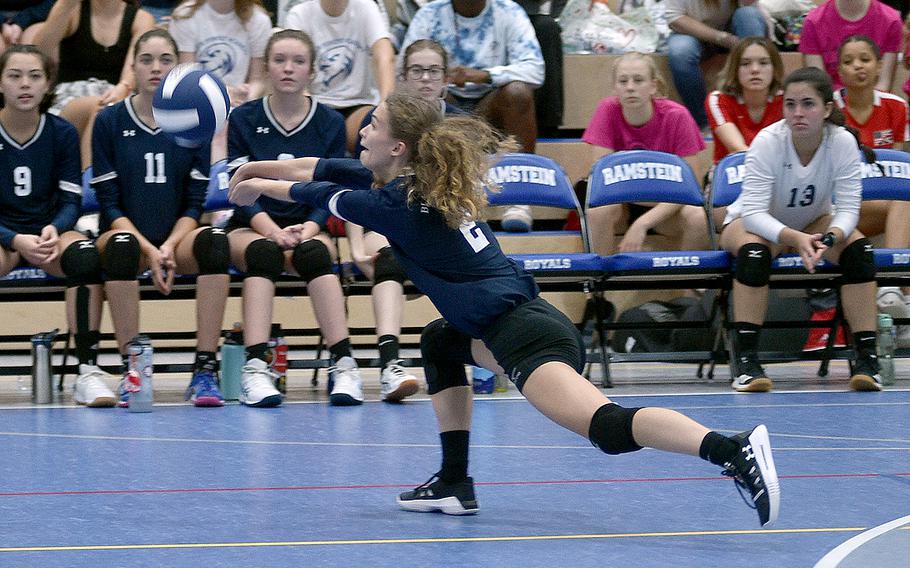 Black Forest Academy's Emma Batluck dives for a ball during a Division II semifinal match with Aviano at the DODEA European championships Friday at Ramstein High School on Ramstein Air Base, Germany. (Matt Wagner/Stars and Stripes)

She and the Falcons just had upset the second-seeded Wildcats in a Division II semifinal at the DODEA European volleyball championships, punching a ticket to Saturday’s final with a sweep, 25-18, 25-22, 25-14.

The victory and the run in the tournament have meant a lot to the junior attacker. Many of Nespoli’s best friends are seniors on the team, and many of them hugged her on the court to celebrate the achievement.

“Last year was very hard for us,” Nespoli said. “This year, we bonded so much as a team, and we knew what is our goal and we decided to fight for it. This team is a family for me, and it is amazing to be a part of this team.”

What a run it has been for AOSR.

The Falcons entered as the fifth seed and were placed in the same pool as top-seeded Aviano and fourth-seeded Vicenza. They defeated Vicenza in their opening match in three sets and pushed the Saints to a third-set tiebreaker before taking second in the pool.

Then came the Wildcats in the semifinals.

Despite having lost to Naples during the season, AOSR managed to control large portions of the match, especially in the first and third sets. 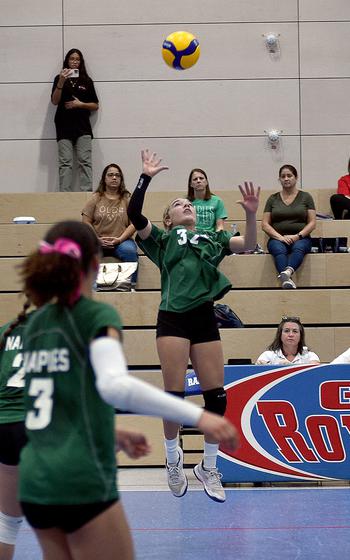 Naples' Emma Heavey jumps to hit the ball during the Wildcats' Division II semifinal match against the American Overseas School of Rome at the DODEA European volleyball championships on Friday at Ramstein High School on Ramstein Air Base, Germany. (Matt Wagner/Stars and Stripes)

A 6-0 run early in the first set gave the Falcons a 10-8 advantage, one they didn’t relinquish the rest of the set. Then, in the third, the Falcons went on a 10-0 run thanks to three aces by junior Lana Djruaskovic and a dink and a kill by Nespoli.

“We played so well during pool play, especially Vicenza,” AOSR coach Claudio Olivieri said. “From that game, we understood that we could do something good. We try to do our best and also push Naples, making them in trouble.”

The only time the Falcons were under pressure came in the second set, when they trailed the Wildcats 19-12. AOSR rallied by putting together a 13-3 run.

“Every single player can spike, can set, can receive it, can serve,” Olivieri said. “We don’t use only two or only one.” The American Overseas School of Rome celebrates after defeating Naples in a Division II semifinal during the DODEA European volleyball championships Friday at Ramstein High School on Ramstein Air Base, Germany. (Matt Wagner/Stars and Stripes)

The Saints took care of business in the first semifinal, beating third-seeded Black Forest Academy 25-23, 25-19, 25-21. It was a match in which Aviano trailed sparingly, even if it took some extra effort to put away the Falcons in the second and third sets.

“That’s probably the best we’ve ever played,” Aviano junior Elaina Holsclaw said. “They were our biggest competition because we never played, we didn’t know what to expect. So, we played exactly how we needed to play to win.”

It marked just the second time in the tournament the Saints didn’t go the full distance in a match, something their coach Michael Gros appreciated.

“We talked about finishing in three because we played three sets this whole time,” Gros said. “They came out swinging. They played to the level that we can play in this match.”

The offense was firing on all cylinders throughout, and it showed by the number of attackers who slammed kills.

“When we’re up, we stay up,” Holsclaw said. “It just keeps on going. The domino effect: We’re up and we stay up.”

So Aviano and AOSR meet for the second time in two days in Saturday’s final at Ramstein High School. The match is set for 12:30 p.m. 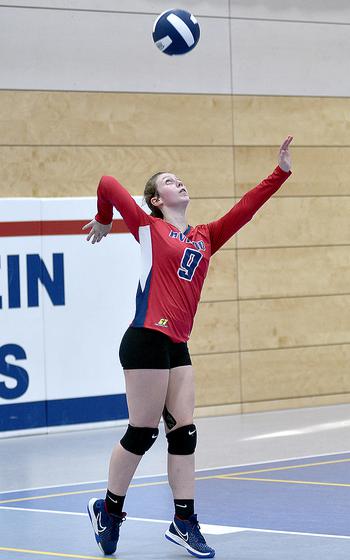 Both squads like their chances. In AOSR’s case, the Falcons are looking to get over the hump and pull off yet another upset.

“From that match, we learned the energy we needed to win,” Nespoli said of the pool-play match against Aviano. “We decided we needed that energy that we had when we played against Aviano, the motivation that we had, the way we were enjoying the game … that’s very important.