Play holds pretty much to form for small schools 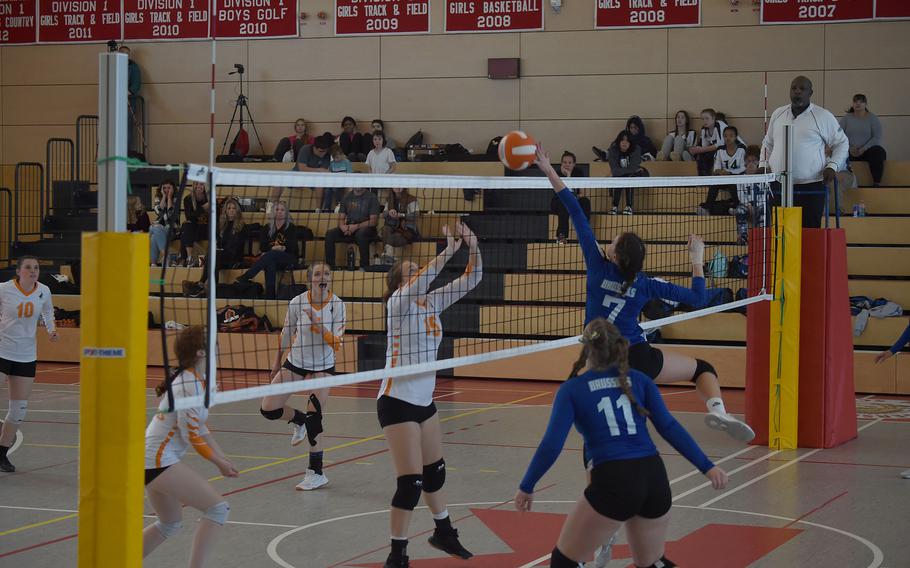 KAISERSLAUTERN, Germany - If you were looking to read about a Cinderella story, you won’t find it in this year’s Division III girls’ volleyball tournament. But the thrills and suspense Thursday kept the crowd on their toes anyway.

The three top seeds and the No. 5 seed clinched spots in Friday’s semifinals in pool play Thursday. However, no team went down without a fight.

Nowhere was that more in evidence than a shootout between Brussels and AFNORTH. Brussels entered the game after a two-set loss to Spangdahlem. But the Brigands pushed AFNORTH to three sets before falling. The second-seeded Lions advanced into the semifinals with the victory.

No. 1 Ansbach took care of business by beating Baumholder in its first game and later defeated Alconbury to join AFNORTH in the semifinals. No. 3 Spangdahlem was the last team to reach the semifinals with a two-set victory over Hohenfels in the final match of the night.

The dark horse, if there is one, comes in the form of a young Sigonella team that is just staring to put all the pieces together at the right time.

The No. 5 seeds of mostly freshmen and sophomores played their regular season in Italy facing a variety of higher division competition. And coach Shawn McCarthy said the team has had to mix up the roster quite a bit this year due to injuries and that this is one of the first times the team has been healthy.

McCarthy said the experience that other players received over the season due to injuries came in valuable during both of their games Thursday.

It showed in the matchup with No. 4 seed Alconbury in what was the loudest and most energetic game of the day on both sides. But the rocket serves and coordinated defense and attack was just too much for Alconbury to match. The Jaguars pounced on their competition, winning in two sets. 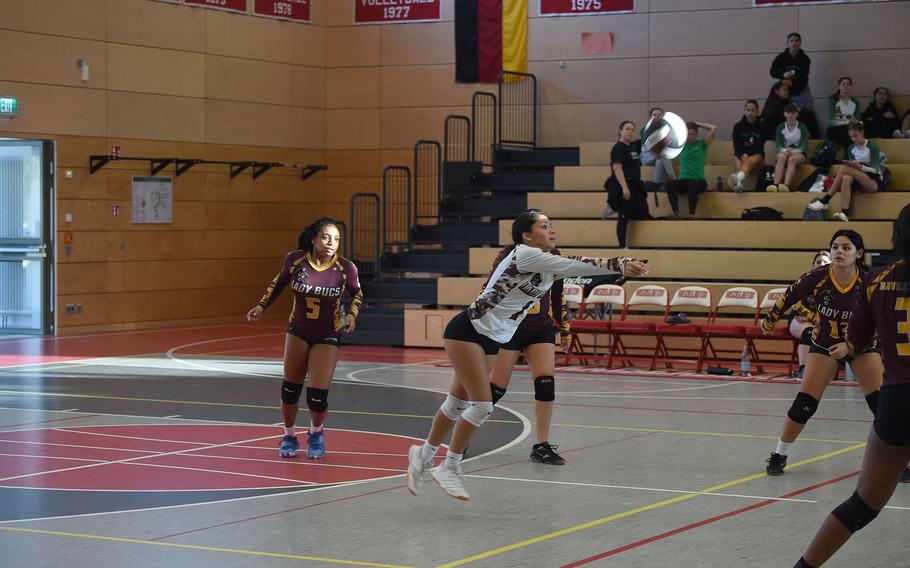 Baumholder’s Emma Rodriguez returns a loose ball in a match against Ansbach on Thursday, Oct. 27, 2022. (Michael Slavin/Stars and Stripes) 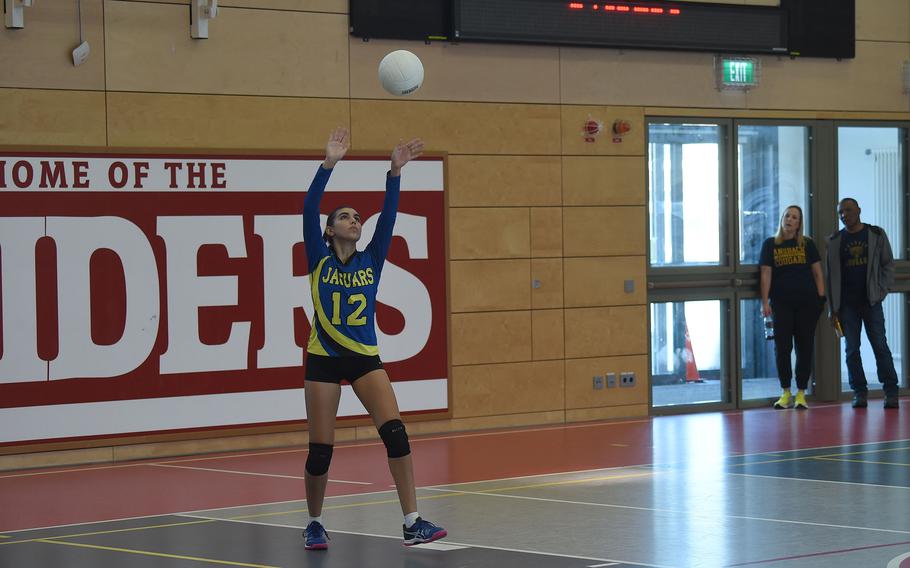 Sigonella’s Fabiola Mercado-Rodriguez serves the ball in a match on Thursday, Oct. 27, 2022. (Michael Slavin/Stars and Stripes) 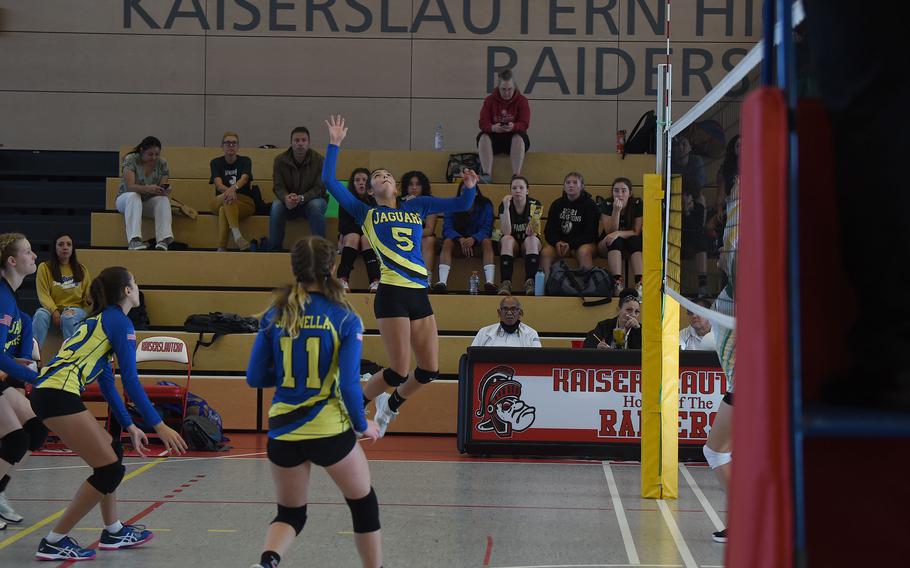 Sigonella’s Ryleigh Denton jumps for the spike in a match against Alconbury on Thursday, Oct. 27, 2022. (Michael Slavin/Stars and Stripes) 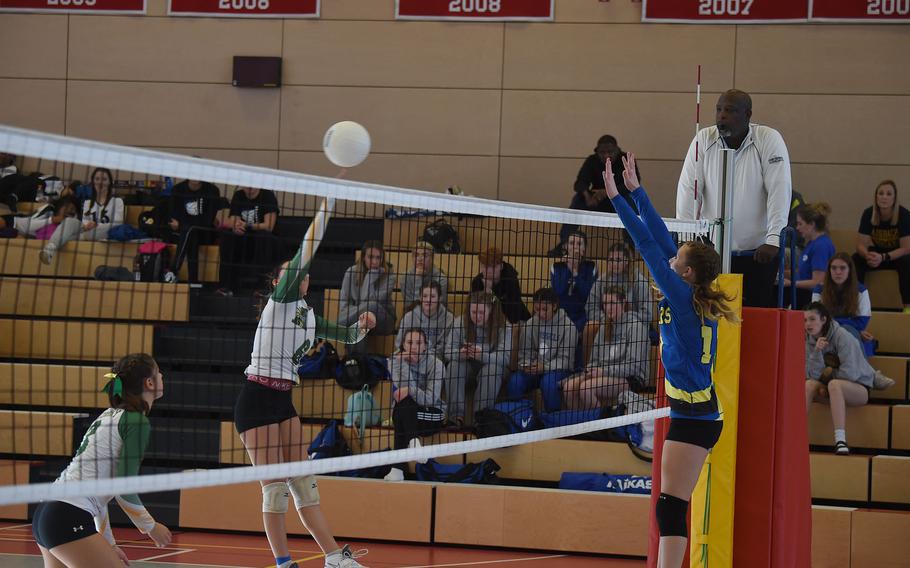 Alconbury’s Lorna Lee spikes the ball in a match against Sigonella on Thursday, Oct. 27, 2022. (Michael Slavin/Stars and Stripes) 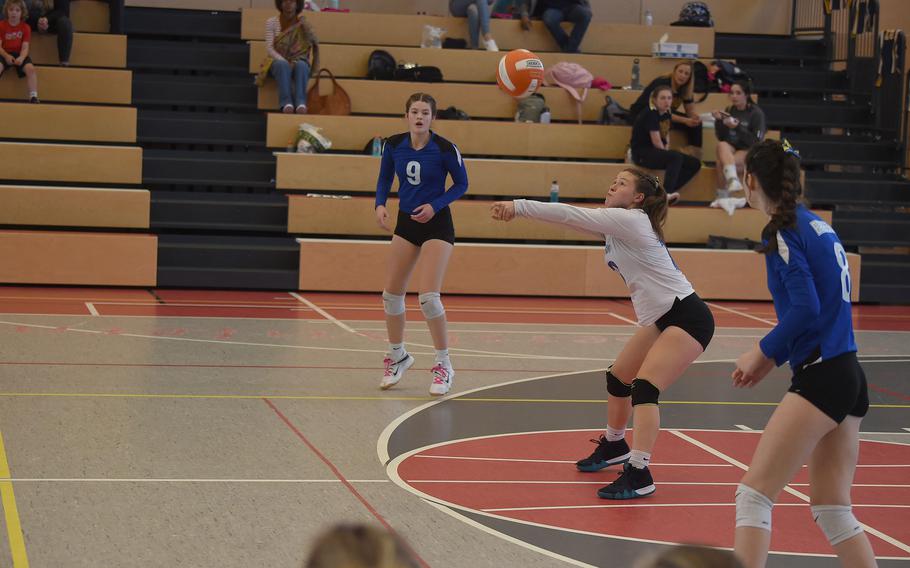 “What has really killed us is our mental toughness,” said Sigonella senior Fabiola Mercado-Rogriguez of her team’s losses during the season. “I feel that we have really proved ourselves in tournament.”

That mental toughness was on full display in their second match.

“We just need to pick ourselves up sooner, so games don’t get as close,” said Mercado-Rodriguez, talking about a narrow victory over Baumholder. The Jaguars gave up a four-point lead in the second set only to close out Baumholder in the third.

Friday’s pool play is all about seeding for the semifinalists. Sigonella will face Ansbach in one pool and Spangdahlem and AFNORTH meet in another. If Thursday’s play is any indication, the rest of the field won’t be letting down in their final matches either.