Stuttgart romps past Ramstein into finals 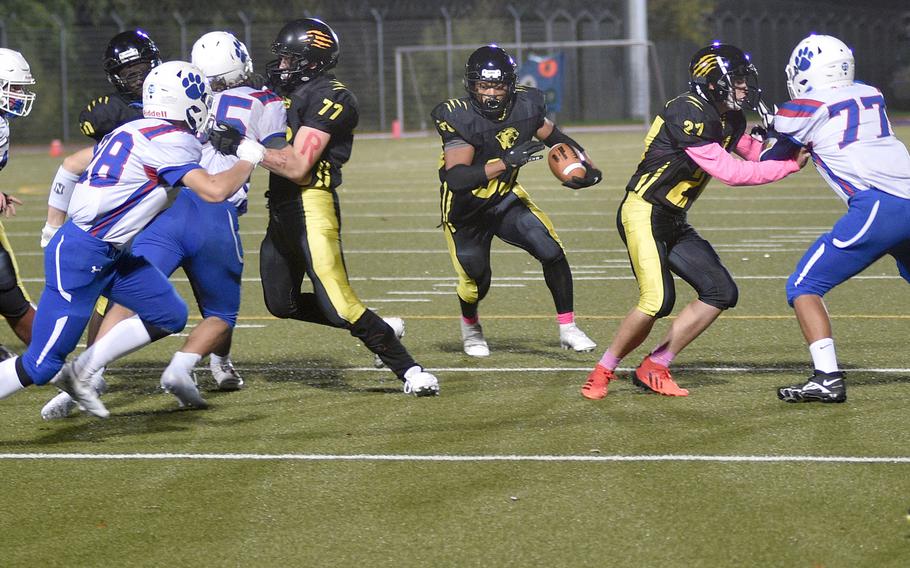 STUTTGART, Germany – Trenton Jackson delivered a simple message to the Stuttgart offensive line before the year.

And the senior running back could not have been happier with the response the Panthers have given him throughout 2022.

“I told my line at the beginning of the season, ‘If you can get me to the second level, I will do the rest,’” Jackson said. “They’ve done about as good a job as they’ve done all of (my) high school (career). They get me to where I need to be, and I take it from there.”

That’s exactly what he did Friday evening in a Division I semifinal against Ramstein.

Jackson rumbled past Royals defenders en route to a five-touchdown, 208-yard performance during Stuttgart’s 46-0 win. The game had hit the mercy rule by halftime.

The Stuttgart star scampered for three scores of more than 40 yards, and on most of them, he either wasn’t touched – such as the 41-yard sweep on the Panthers’ second offensive play of the game or a 60-yard sweep at the 10-minute, 34-second mark in the second quarter – or barreled through the Royal defense – such as the 23-yard touchdown at the 2:50 mark in the first quarter that made it 26-0 or a 68-yard score with 6:00 remaining in the first half to make it 39-0.

He also powered for a 5-yard touchdown for Stuttgart (8-0) at the 6:20 mark in the first quarter.

“He’ll be playing on Saturdays at the college level,” Stuttgart coach Bill Ratcliff said of Jackson. “He’s just an insane athlete. If the scores wouldn’t get out of hand so quick, he could have had 300, 400 rushing yards a game. He’s that good.” 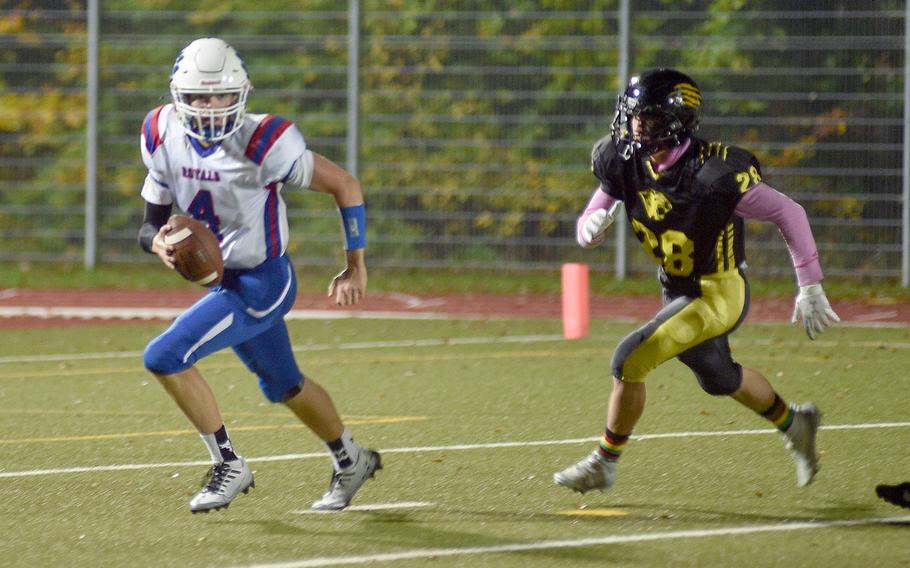 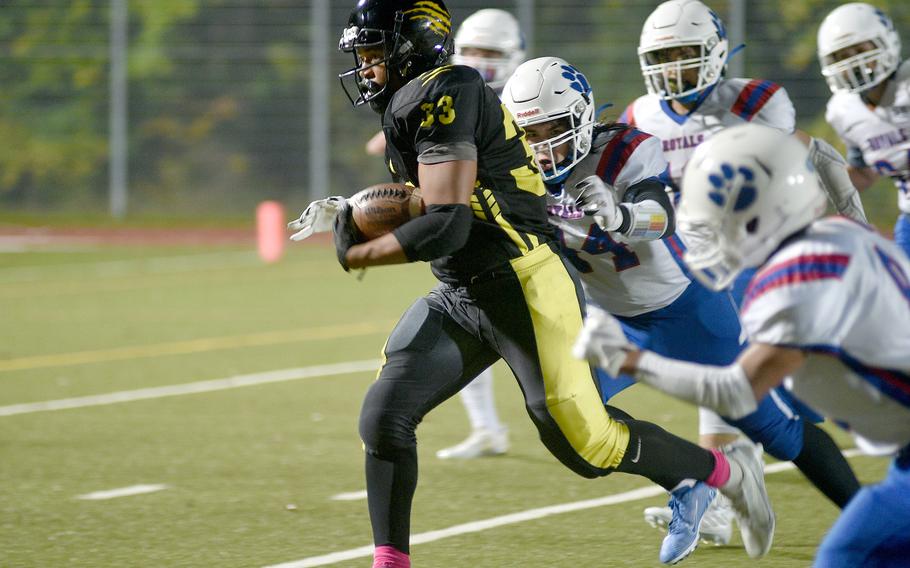 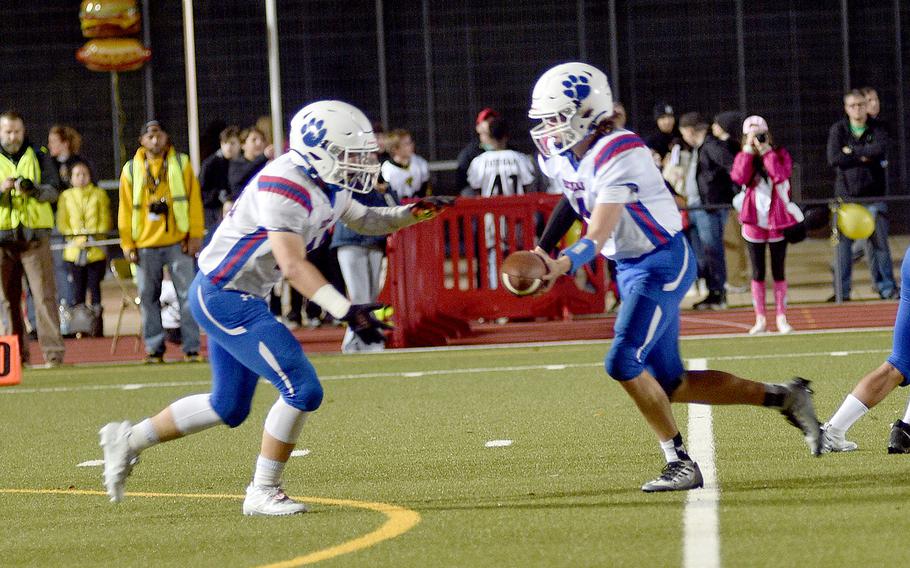 Jackson’s performance was supplemented by two long throwing scores by quarterback Caiden Ray. The senior connected with Jace Holmes for a 58-yard touchdown to make 20-0, and he then tossed a screen to DeShawn Lewis, who went 69 yards for pay dirt with 3:00 left in the half.

Although the Panthers held the Royals scoreless, Ramstein (2-6) did manage to move the ball into Stuttgart territory twice.

The biggest threat came midway through the first quarter, as a Lucas Hollenbeck scramble for 19 yards and a pass to Charles Wheeler drove the Royals to the Stuttgart 38-yard line. The drive stalled, though, and the Panthers forced Hollenbeck to throw away a pass on fourth down and turn the ball over on downs.

Overall, the Panthers held the Royals to 81 yards of total offense and sacked Hollenbeck and sophomore Michael Gonzales - who entered the game under center after Hollenbeck was injured in the second quarter - three times. Junior linebacker Levi Katzenberger collected two of those sacks.

“We were tested a couple of times; they reached our territory,” Jackson said. “We’re playing our hearts out on defense. You can’t ask for anything better.”

For the Royals, it was a bitter end to a season that saw a young, inexperienced team qualify for the playoffs. Coach Carter Hollenbeck said inconsistency plagued Ramstein throughout the season, but the growth was evident.

“We have seniors where this is the first time they have played football,” Hollenbeck said. “They’ve taken a lot of direction, a lot of instruction, and where we were at the beginning of the year – although the score today is not an indicator – to where we’re at now, we’ve improved tremendously. And I’m proud of every one of my guys.”

Stuttgart, meanwhile, advances to the Division I final on Oct. 29 in Kaiserslautern, Germany, against Vilseck, a 25-14 winner over Lakenheath. The Panthers defeated the Falcons twice – 45-9 on Sept. 9 and 42-7 on Oct. 7 – already this season.

Vilseck 25, Lakenheath 14: Friday at Lakenheath, the Falcons took a 19-0 lead, then held on to defeat the National Conference champions.

Bullock, who threw for 166 yards, answered with a 39-yard touchdown pass to Junior DeJesus before Lakenheath finished the scoring with Nico Marchini’s 27-yard pass to Gavin Idleman. The two hooked up again for the two-point conversion.

Vilseck’s win avenged a 33-0 loss to the Lancers earlier this season. Much of that credit goes to the defense, led by Pierre Fuentes and Owen Brewer, who each took part in eight tackles and a sack. Garrett Hyten had two more sacks and Ibrahima Balde had a late-game interception to seal the victory.

Marchini threw for 273 yards for the Lancers, with Tyler Bane and Dante Thompson each grabbing passes totaling more than 90 yards.