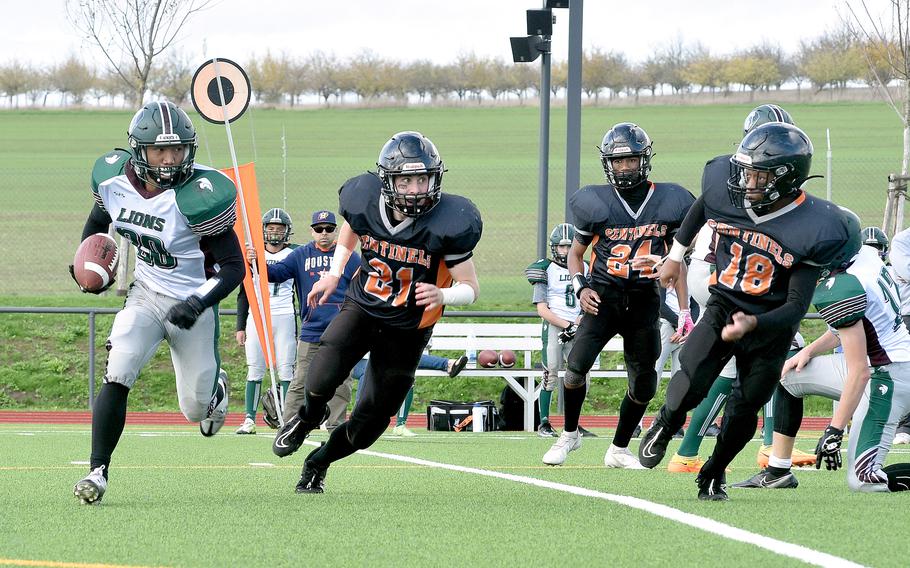 Just ask the Spangdahlem Sentinels – they have done it two consecutive seasons.

Saturday, the Sentinels proved up to the task, even if it took a while to get going during their DODEA-Europe Division III football semifinal. They didn’t score until midway through the second quarter, but still managed to handle the AFNORTH Lions 48-6.

“We did that same thing last year when we lost to Baumholder the last game of the season and had to play Baumholder in the championship,” Spangdahlem coach Terry Hoffman said. “It just seems like you go through that repetition in practice, getting ready for the same team two weeks in a row. It’s kind of hard to prepare for that.”

AFNORTH (2-4) kept the Sentinels (6-1) in check for a quarter-and-a-half, even taking the lead thanks to a 65-yard touchdown run by junior Nathan Goldsmith at the 6-minute, 15-second mark of the second quarter.

The Spangdahlem offense responded immediately. Quarterback Casey Supringer floated a ball down the sideline to sophomore receiver Nathan Johnson for a 31-yard gain. That was the longest play from scrimmage for the Sentinels up to that point.

It also signaled what was to come. Supringer connected with his receivers on fly routes for big gains and touchdowns, including a 19-yard score to Johnson to open the scoring for the Sentinels, 71-yard and 32-yard tosses to junior Robert Leggett on consecutive drives in the third quarter and a 20-yard pitch-and-catch up the middle to junior M.J. Brown at the 1:39 mark in the third quarter to make it 42-6. 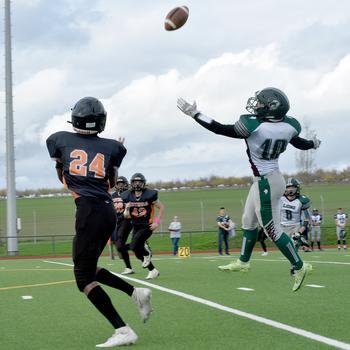 Spangdahlem’s Robert Leggett prepares to catch a ball that is floated over AFNORTH’s Nik Fulde during a DODEA-Europe Division III semifinal in Spangdahlem, Germany (Matt Wagner/Stars and Stripes)

From midway through the second quarter until the end of the game, Supringer went 9-of-14 passing for 262 yards and six touchdowns. He finished 15-of-32 for 314 yards.

Leggett had those two catches for 103 yards, while Johnson grabbed six for 62 yards.

Supringer said the Sentinels saw the Lions were pressing receivers at the line, which left the secondary open to the deep balls.

“Tossing it to my man and trusting him is what I need to be doing every single play,” the junior signal caller said. “I trust my receivers all the time with the go routes and wheels. Because they can beat their men, I trust them a lot.”

Added to the offensive explosion was a pair of key plays late in the second quarter from the defense and special teams.

The first came from junior Markario Drummond, who fielded a punt at the AFNORTH 45-yard line and found a seam along the sideline before cutting back inside to break a few tackles to hit pay dirt. That score with 2:26 remaining in the first half gave Spangdahlem the lead at 14-6.

Then, after a muffed punt return gave AFNORTH the ball deep in Spangdahlem territory, Supringer jumped a pass intended for Caden Snider and returned it to the Lions 18. On the next play, Supringer found Brown for a touchdown.

“In film, we saw [Snider] would always go out for a dump pass,” Supringer said. “So, I told my man Cordick (Sago) to let me get him. I saw it, read it, saw the quarterback’s eyes, picked it off and started running down the sideline.” 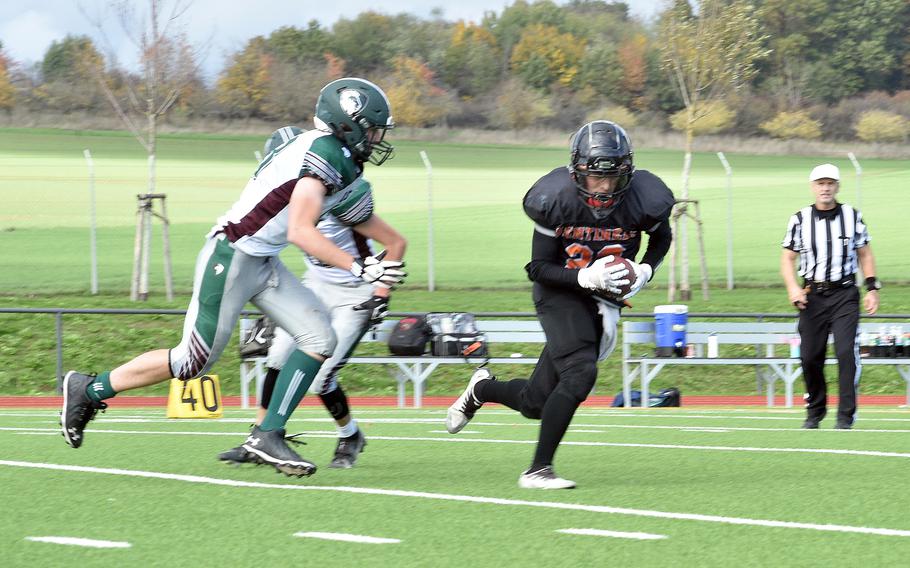 For AFNORTH, Saturday went parallel to its season. After a quick start that had the Lions win their first two games, they lost their final four. Coach James Argyle said the team struggled to recover from key injuries later in the season.

“I think our potential is much more than we showed through the past four games,” Argyle said. “I want to go back to what we were those first couple games, kind of reset that next season, maintain it, and I think we’re in good shape.”

As for Spangdahlem, it awaits the winner of the other semifinal between Brussels and Sigonella, which will be played Monday at 3 p.m. No matter who wins, the Sentinels expect to be up for the challenge on Oct. 29 in Kaiserslautern.

“I think we’re going to see a good game,” Hoffman said. “The two teams that make it to that championships are the two best coming out of this six-man football league. … The team’s ready to play anybody.”