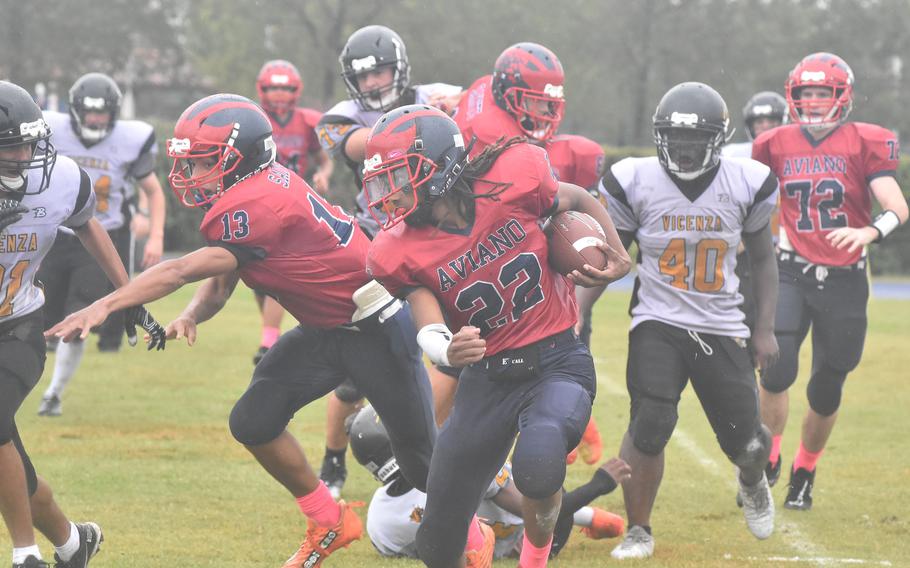 Aviano's Deon Walker checks out the defense while trying to gain some yardage Saturday, Oct. 22, 2022, in the Saints' 40-0 victory over the Cougars. (Kent Harris/Stars and Stripes)

AVIANO AIR BASE, Italy – The Aviano Saints should see if the third time is indeed the charm next weekend as they presumably travel to play Naples for the DODEA-Europe Division II football championship.

Aviano, which has lost to the Wildcats twice already this season in fairly convincing fashion, also has defeated the Vicenza Cougars three times in games that were possibly even more lopsided.

The latest was a 40-0 victory on Saturday in the semifinals that was actually a bit closer than the score indicated.

Vicenza turned the ball over five times and only had one drive that lasted for more than a few plays Saturday, but did have two successful stands near its end zone and forced the Saints to turn the ball over on downs three times.

“This is actually a win,” he said. “It might not look like it, but I’ve seen this team – many of whom never played football before – improve so much from the beginning of the season …”

Aviano likely will have to make an even bigger improvement in a week itself if hopes to defeat the Wildcats, who are set to host Rota on Monday in the other division semifinal. The Wildcats have defeated the Admirals by a combined score of 95-0 in two games this season.

“They’re by far the strongest team in the conference,” Aviano coach Rick Dahlstrom said of the Wildcats, who have handled the Saints 75-21 in two games. “We’ll try to take our 22 or however many [19 were suited up Saturday] scrappy players, come up with a plan and see what happens.” 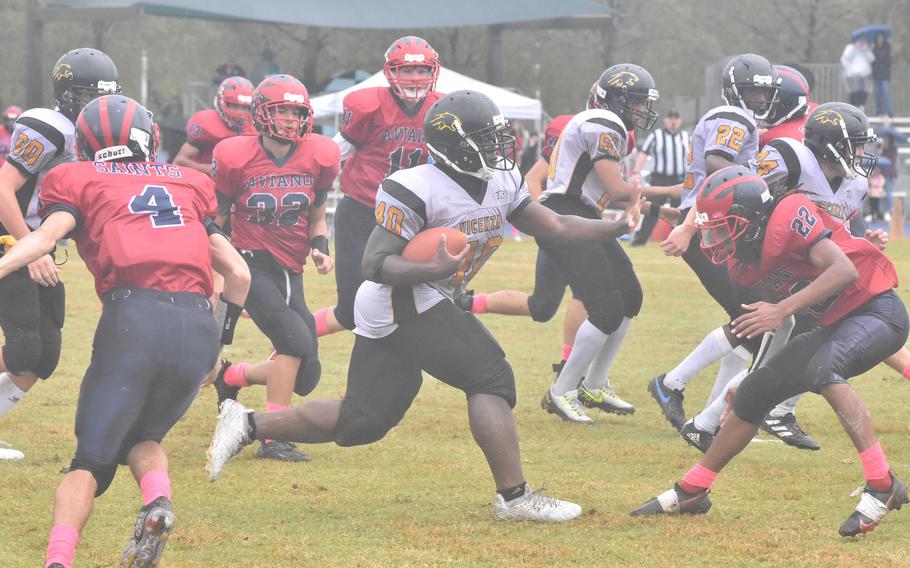 Vicenza's Daniel Bagoubeu was a one-man wrecking crew once he got into the Aviano backfield Saturday, Oct. 22, 2022. Fortunately for the Saints, that only happened a handful of times in their 40-0 victory. (Kent Harris/Stars and Stripes) 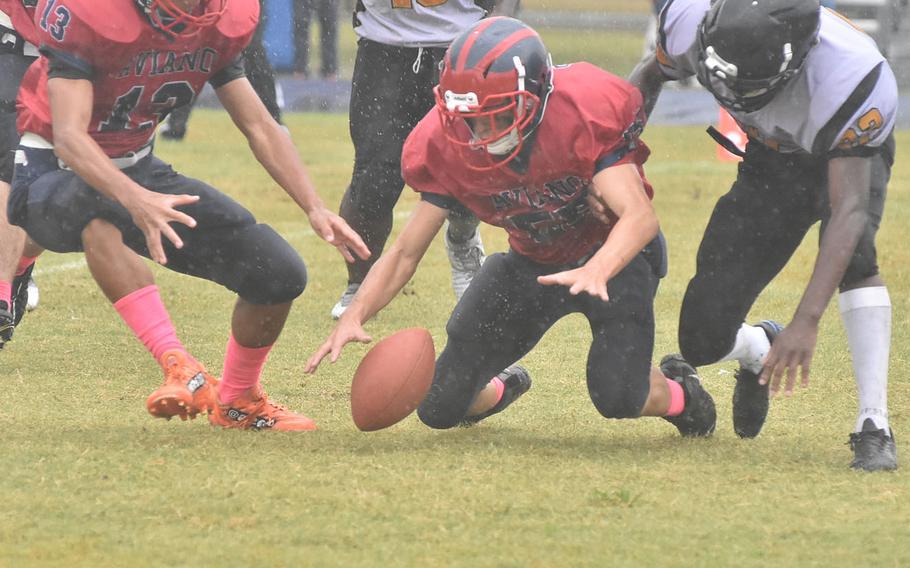 Aviano's Joshua Barthold and Vicenza's Ezo Lane chase after a loose ball on Saturday, Oct. 22, 2022. Barthold recovered the fumble, one of the Cougars' five turnovers in Aviano's 40-0 victory. (Kent Harris/Stars and Stripes) 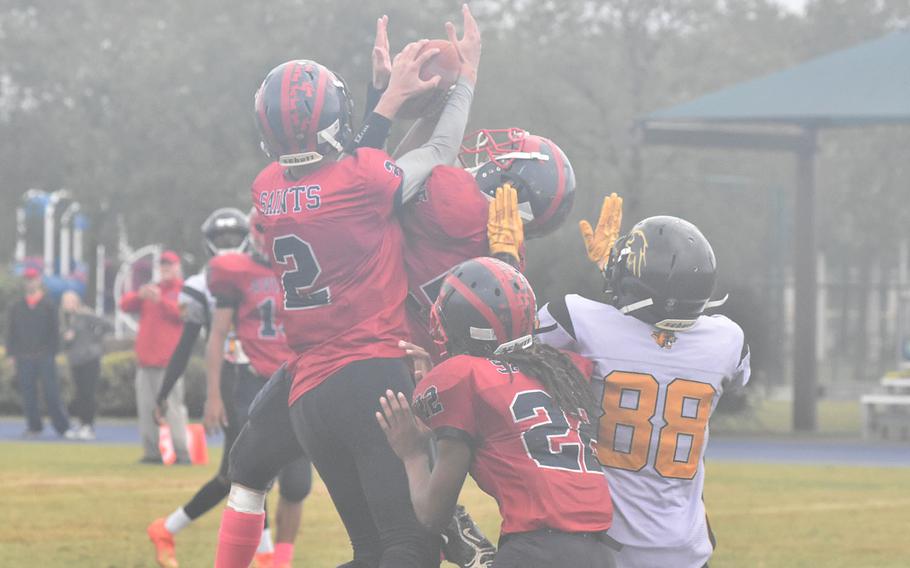 The ball is up for grabs Saturday, Oct. 22, 2022, in the Aviano Saints' 40-0 victory over the Vicenza Cougars. Aviano's Joshua Barthold came down with it. (Kent Harris/Stars and Stripes) 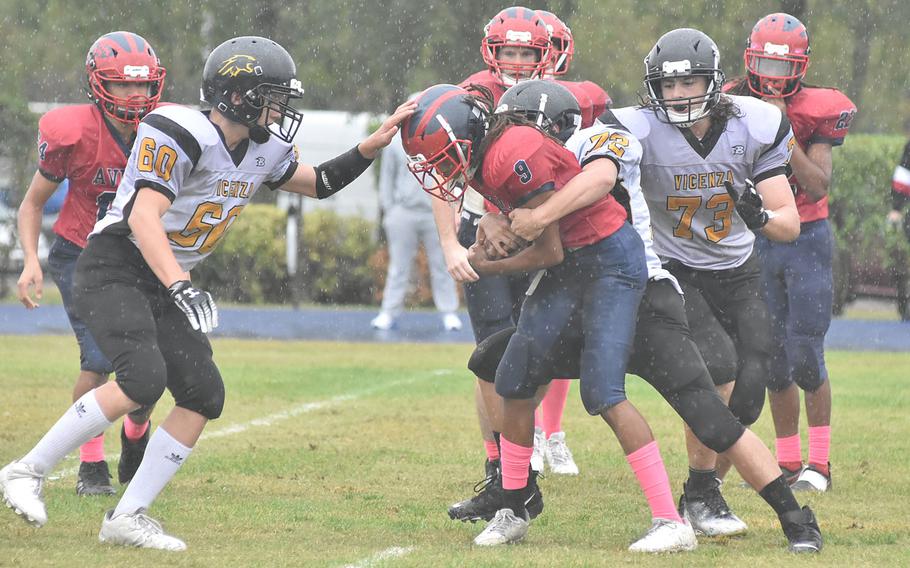 Aviano quarterback Andrew Walker tries to hold onto the ball during a steady rain as Vicenza's Kaden Peterson grabs him from behind and Ian Rhynalds approaches in the Saints' 40-0 victory on Saturday, Oct. 22, 2022. (Kent Harris/Stars and Stripes) 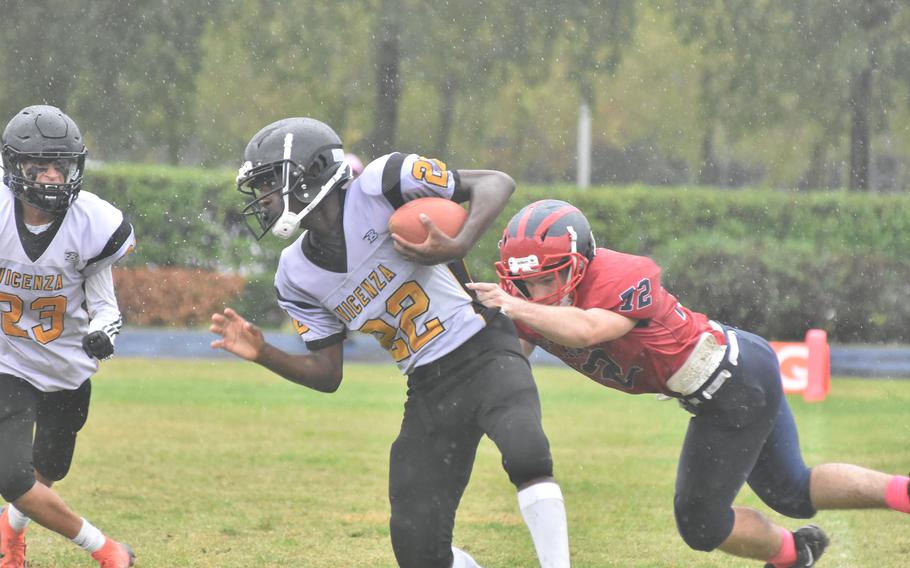 Vicenza's Ezo Lane tries to run with the ball and drag Aviano's Jevan Smith with him in the process in the Saints' 40-0 victory on Saturday, Oct. 22, 2022. (Kent Harris/Stars and Stripes) 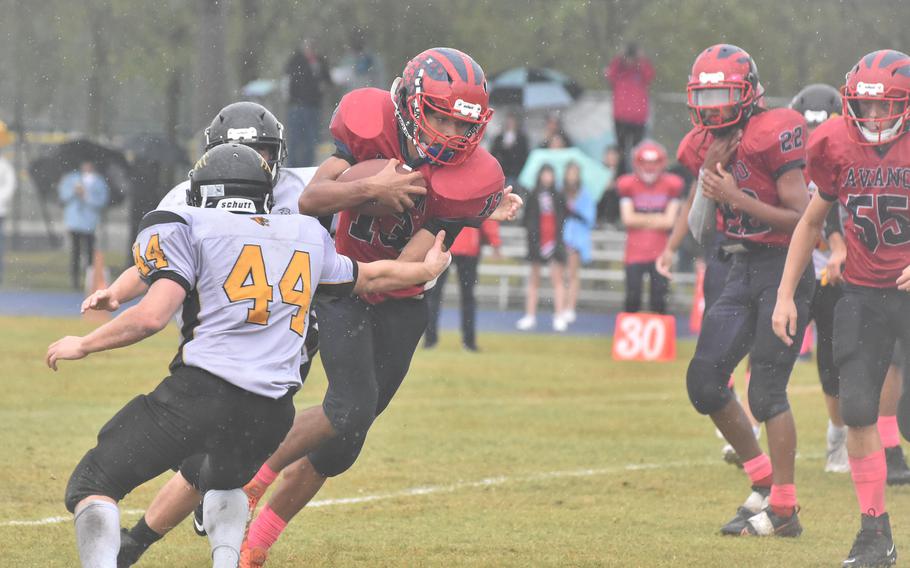 Aviano's Malakai Harkley tries to get by Vicenza tacklers in the Saints' 40-0 victory over the Cougars on Saturday, Oct. 22, 2022. (Kent Harris/Stars and Stripes)

Javan Sherrod, one of the Saints’ captains, said he thinks a victory is possible.

“We’ve improved so much from the start of the season,” he said. “I see a good game for both teams, but we could come out on top.”

Saturday’s game with Vicenza, which began under a steady rain, wasn’t in doubt for very long. Aviano went up 14-0 after one quarter on a pair of touchdown runs from Deon Walker. Colin North returned a fumble 15 yards for a score in the second quarter and Malakai Harkley’s conversion run made it 22-0.

Harkley later scored two touchdowns of his own and Walker would add another.

Vicenza’s best chance of the day came when Daniel Bagoubeu – a junior built more like a guard than a running back – bulled into the Aviano backfield on three straight runs to the edge of the Aviano red zone. But a pushing-in-the-back penalty on his final run set the Cougars back and they never recovered.

If Rota manages to upset Naples, the Saints would host the title game. Aviano has beaten Rota twice this season by a combined score of 84-6.