WIESBADEN, Germany – Almost all the top seeds in the DODEA European tennis championships made it through the semifinals Friday to earn a shot at Saturday titles.

In singles action, the No. 1 and No. 2 seeds will face off: Kaiserslautern’s Stella Schmitz vs. Ramstein’s Kassianna von Eicken and Ramstein’s Tristan Chandler vs. Marymount’s Leonardo Proietti.

All four have sailed through the tournament undefeated.

“I definitely came in a little nervous,” Schmitz said. “Usually I’m not that nervous, which I surprised myself with that. But I think I handled the nerves pretty well and I could play my game.”

A senior, Von Eicken is excited to be in the finals after being sidelined the last two years due to injury. As a freshman, she finished third at Europeans.

“I’m glad to be back for my senior year,” she said.

Chandler, who won as a freshman for Kaiserslautern, is the only returning singles champion. He bettered Kaiserslautern’s Alexander Brunt, 6-0, 6-0 - a victory that was bittersweet, he said.

“Having to play against my old teammate, it was difficult at first,” Chandler said. He’ll be rooting for Brunt to get third on Saturday, while aiming to defend his title. He’ll face Proietti, who disposed of the No. 6 seed, Naples’ Sam Stutzman, 6-0, 6-0.

“It was a fun match,” Stutzman said. “I definitely gave him a hard time on some points.” Naples' Sam Stutzman made it to the semifinals on Friday, Oct. 21, 2022, at the DODEA European tennis championships in Wiesbaden, Germany, as a No. 6 seed. (Jennifer H. Svan/Stars and Stripes) 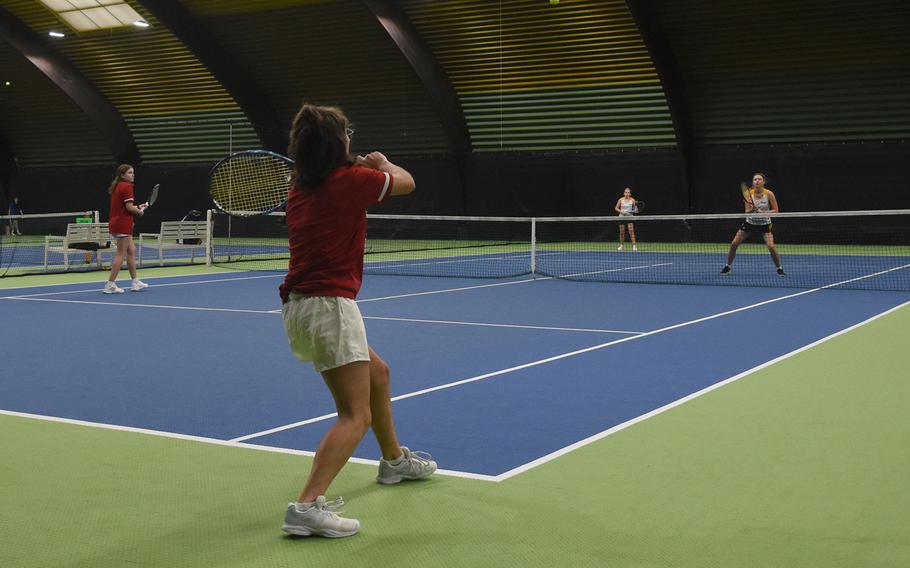 Kaiserslautern’s Alisa Dietzel returns the ball during a doubles match against Vicenza at the DODEA European tennis championships on Friday, Oct. 21, 2022, in Wiesbaden, Germany. Dietzel and teammate Abigail Hover will play in the finals against Stuttgart on Saturday. (Jennifer H. Svan/Stars and Stripes) Vicenza’s Annika Svenson hits the ball during doubles play to Stuttgart’s Kiera French at the DODEA European tennis championships on Friday, Oct. 21, 2022, in Wiesbaden, Germany. Svenson and teammate Addie Wilson lost to French and her sister, Devin French, in three sets in the semifinals. (Jennifer H. Svan/Stars and Strip) Naples' Ben Avalos lunges for the ball while teammate Nicholas Cruz looks on during a semifinals doubles match against Ramstein on Friday, Oct. 21, 2022, at the DODEA European tennis championships in Wiesbaden, Germany. (Jennifer H. Svan/Stars and Stripes) 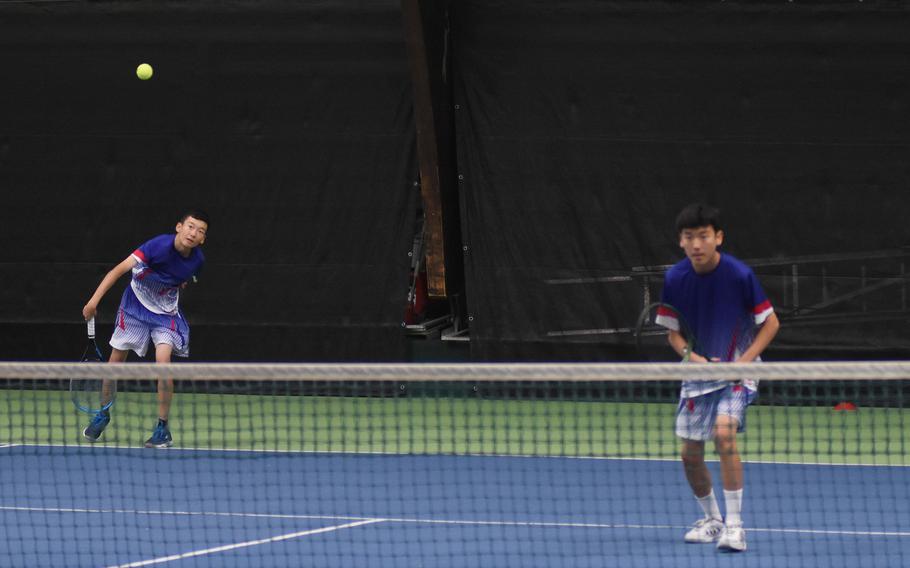 Ramstein’s Sean Kim serves the ball next to his brother and teammate, Eric Kim, during a semifinals match at the DODEA European tennis championships on Friday, Oct. 21, 2022, in Wiesbaden, Germany. (Jennifer H. Svan/Stars and Stripes) Ramstein’s Tristan Chandler hits the ball on the run during a match on Friday. Oct. 21, 2022, at the DODEA European tennis championships at Wiesbaden, Germany. Chandler will seek to defend his 2021 singles title on Saturday. (Jennifer H. Svan/Stars and Stripes)

In doubles action, Stuttgart siblings Devin and Kiera French survived a nailbiter against Vicenza freshmen Addie Wilson and Annika Svenson in three sets, 6-3, 5-7, 10-5. The French sisters entered the tourney as the No. 1 seed after ending the regular season undefeated. They finished fourth last year and have been striving for a doubles’ title all season.

“That’s the one thing I wanted to do for Devin’s last year here,” said Kiera French, a year younger than her senior sister. “We’re so excited.”

Devin French said Wilson and Svenson gave them “our closest match ever. They are definitely good players.”

On the boys’ side, Stuttgart’s Noah Shive and Zachary Call upended Vicenza’s Sam Grady and Andrew Reed for a spot in the finals. They’ll try to end a Cinderella run by Naples’ Nick Cronk and Ben Avalos. The sixth-seeded Cronk and Avalos battled past No. 3 seed Ramstein brothers Eric and Sean Kim, 6-2, 6-3.

“I think we played the best match of our life,” Cronk said of the semifinals win.

The underdogs dropped only one match in the tourney – to Stuttgart.