Sisterhood of the (fast) traveling feet 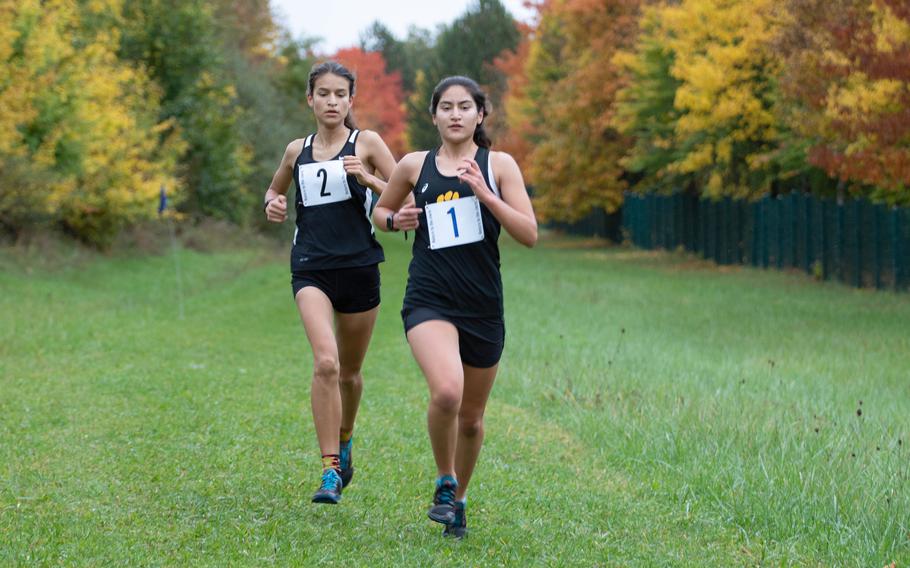 Sisters Vanessa Alder, right, and Lily Alder transferred into Stuttgart before the school year began and are expected to battle it out for the girls title at the DODEA-Europe cross country championships on Saturday at Baumholder, Germany. (Christof Risch/Special to Stripes)

Vanessa Alder has plenty of experience being in a sister tandem on cross country courses.

For her first two high school seasons in North Carolina, she raced with three-time 4A state champion Carmen Alder, her elder sister. She finished third her freshman year and second her sophomore year.

Two moves – one to Pennsylvania and another across the Atlantic Ocean – and almost two years later, the Stuttgart senior finds herself in the same situation, just with her role reversed: Vanessa is the favorite to win the crown during the DODEA European Championships on the Rolling Hills Golf Course in Baumholder, Germany, on Saturday, while her younger sister Lily, a freshman, is the next rising star.

“It’s been weird being the older sister, but it’s still been nice because I’ve been able to help her and we’re able to push each other in the workouts in the races,” Vanessa said.

“I just love to be able to start a race with my sister at the line. It’s been so great to be able to help Lily and be able to joke with her on the line, just like my older sister did with me, and be there for her and help push her.”

Pushing each other is something this family of runners do, as it starts from the previous generation.

Both parents, Dan and Janeth, ran in college at Brigham Young University, where their eldest daughter currently runs. Janeth, then Caizalitin, represented Ecuador at the 1992 Summer Olympic Games in Barcelona, finishing 11th in her 3,000-meter heat.

With Carmen setting the tone for the newest generation – and besting the previous generation by breaking her mother’s 32-year-old Ecuadorian 1,500-meter record this spring – the siblings compete against each other’s times at their respective ages. Lily said her goal has been to beat Carmen’s freshman year time of 18 minutes, 4 seconds; Vanessa’s best time her freshman year was 18:13. Lily’s best time came during the Sept. 24 meet at Vilseck at 18:11.3.

Considering all the experience her family has, Lily doesn’t have to turn far for advice.

“If I have a problem, I will just go to them, and they tell me, ‘Oh, I’ve done that before and you just ice this, do that,’” said Lily, who also mentioned it’s a role she can play later with her younger siblings – a brother in seventh grade and a sister in fourth, both runners as well. “It’s a lot easier to go through high school with other people there to guide you and tell me what I should be doing and help me get better times.”

Lily’s speed, meanwhile, has had a positive effect on Vanessa.

These performances also have come off Vanessa’s titles from the South American U18 Championships, where she represented Ecuador on Sept. 9-11 in Sao Paulo, Brazil. Vanessa won the 1,500- and 3,000-meter races.

Although Vanessa and Lily could be considered rivals, the older sister said they never take it too far.

“Honestly, I like it that Lily gets to push me, I get to push her,” Vanessa said. “It’s competitive in a really friendly way. If Lily beat me, I’d still be super happy for her.”

That mentality carries to the rest of their teammates, who are hoping to nab the team title.

Along with the top two, the Panthers boast last year’s European champion in junior Ella Bishop, while sophomore Sophie Templeton and freshman Regan Stewart round out a strong top five. A team’s first five runners make up its score.

“They’re combination is very harmonious,” Stuttgart coach Olga Sims said of Vanessa and Lily. “I believe that they could finish each other’s sentences, that’s how well they know each other.

“You can see that relationship as you observe. They cheer for each other; they also cheer for other girls. They are just as happy for other girls to succeed as they are for their personal goals.”

As for Saturday’s European championships, Vanessa and Lily have the sights set on going for gold.

In Lily’s case, though, she expressed hope her Vanessa will get that elusive cross country title. After two top-three finishes behind Carmen in North Carolina, Vanessa took ninth place in the 3A PIAA Championships in Hershey, Pa., her junior year.

“For me, I’m more excited for Vanessa because it’s her senior year and she’s going to finish her last cross country season, try to get a good time and good place,” Lily said. “So, for me, I’m glad watching her do all these things, as long as I’m close to her – I don’t want to be too far behind, as long as I can watch Vanessa get her glory.”