Trying to advance against foes old and new 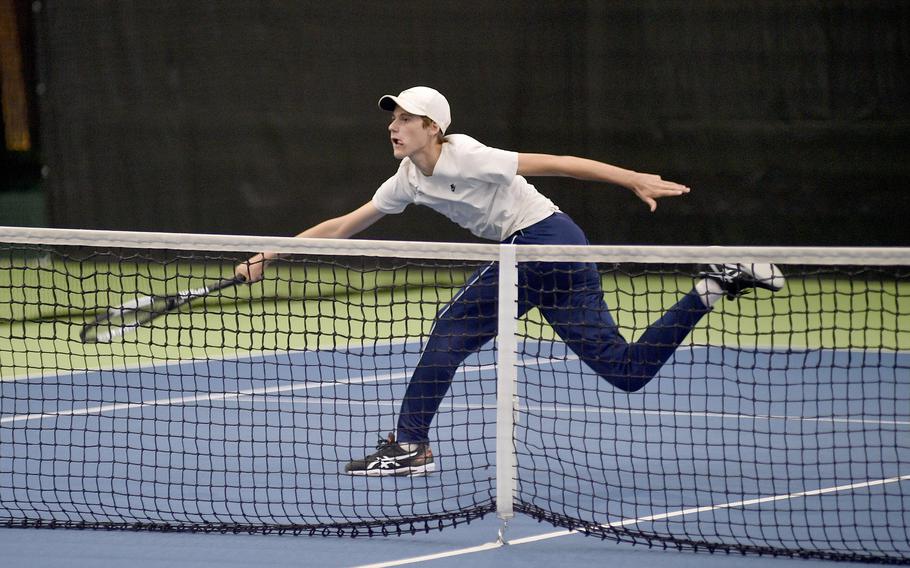 Marymount’s Leonardo Proietti stretches out for a ball during his match with Brussels’ Grant Rohrer on Thursday during the DODEA European tennis championships at the T2 Sports Health Club in Wiesbaden, Germany. (Matt Wagner/Stars and Stripes)

WIESBADEN, Germany – It had been a while since all of Europe could come together for the DODEA European tennis championships.

In 2020, nobody could travel due to COVID-19 restrictions, while in 2021, the schools north of the Alps and the ones south split their championships.

On Thursday at the T2 Sports Health Club in Wiesbaden, Germany, 60 athletes from across the continent and Bahrain made it feel like a European championship.

“Two years ago, we weren’t allowed to even travel,” said Naples doubles player Ben Avalos, who went 2-0 with teammate Nick Cronk on Thursday. “Last year, we could travel, but it’s such a different experience and such a unique opportunity to be able to come to Germany for a week and see all these people.” 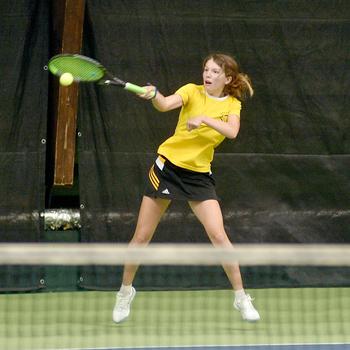 Vicenza’s Delia Gordon hits during her match with Sigonella’s Charlize Caro on Thursday during the DODEA European tennis championships at the T2 Sports Health Club in Wiesbaden, Germany. (Matt Wagner/Stars and Stripes)

That was the case for Vicenza freshmen Abby Wilson and Annika Svenson. The duo said most of the competition they faced this year were in Italy and got their first cracks at northern European teams in Wiesbaden’s Bella Rainey and Sophia Rainey and Brussels’ Abigail Haltunnen and Riley Thomas. Wilson and Svenson beat the Raineys and Haltunnen and Thomas by 8-2 scores.

“I think it’s pretty cool because we basically played every Italy person that is here,” Wilson said. “So, we’re playing all these new Germany people, and it’s a new experience.”

The two noticed a difference when stepping onto the court in Wiesbaden. They said the German and Belgian teams put more spin on the ball than they are used to and noticed the step in play.

“I feel like Germany’s a little more competitive than we’re used to,” Svenson said. “Just a teensy bit more.” 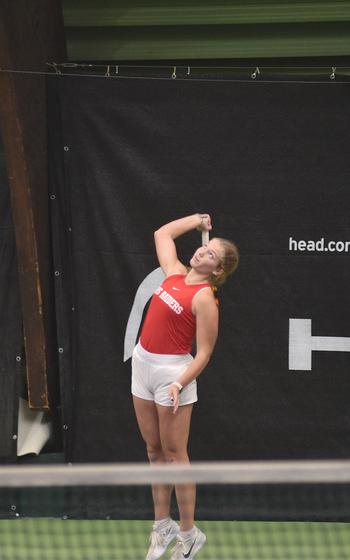 Kaiserslautern’s Stella Schmitz serves during her match with Ansbach’s Meredith Maxwell on Thursday during the DODEA European tennis championships at the T2 Sports Health Club in Wiesbaden, Germany. (Matt Wagner/Stars and Stripes)

For Naples’ Avalos and Cronk, it was a day to remember.

The sixth-seeded doubles team pulled off an upset in the first match, defeating the fourth-seeded Gethin Moose and Tyler Kesinger of Alconbury 8-5. Then, Avalos and Cronk took care of the 10th-seeded Nicolas Lanker and Grant Sturgeon of Rota 8-0.

The Wildcat pair open Friday with the top seed in the tournament, Noah Shive and Zachary Call of Stuttgart. Having one upset under their belts has given them a boost, they said.

“I think it gives us a lot of confidence for tomorrow,” Cronk said. “We have the No. 1 seed tomorrow, which is going to be hard, but I think we can beat them.” 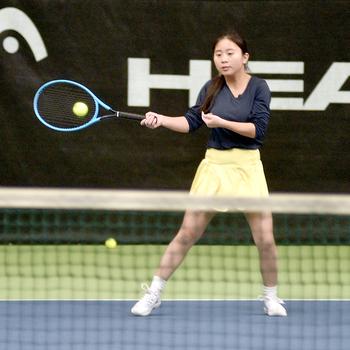 Meredith Maxwell of Ansbach hits the ball during her match with Kaiserslautern’s Stella Schmitz on Thursday during the DODEA European tennis championships at the T2 Sports Health Club in Wiesbaden, Germany. (Matt Wagner/Stars and Stripes)

Both sophomores open Friday with their pool-play finales against their toughest competition so far. Caffarelli faces off with Kassianna von Eicken from Ramstein, while Proietti has Kaiserslautern’s Alexander Brunk.

“When you find someone of your level, then you have to show something more,” Marymount coach Marco Mascioli said. “The mental hurt makes a difference.”

As for Cronk and Avalos, they won’t let whatever happens Friday tarnish the experience.

The two hadn’t played together prior to this season, so getting to the championships was an accomplishment. A semifinal run just would be icing on the cake.

“Even if we don’t win, I think the both of us got much better from when started this year,” Cronk said. “We also got to (understand) each other well.” 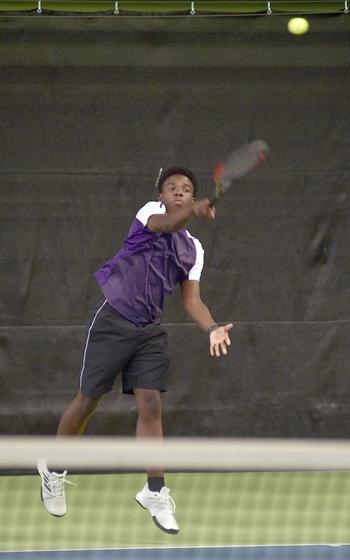