TOKYO – Some teams are using American School In Japan YUJO volleyball tournament to end their seasons. Others are using it as a tune-up event for next week’s DODEA All-Japan championship on Okinawa.

There’s even six boys teams in their own bracket for the first time.

After two years of limited fields due to the coronavirus pandemic, the YUJO tournament is almost back to normal, with 19 total teams, the most since the last pre-COVID iteration back in October 2019.

“This is kind of a rare experience,” senior Aileen FitzGerald of E.J. King said prior to the Cobras’ first match Thursday, a two-set victory over ASIJ’s junior varsity.

FitzGerald is one of just two Cobras who were present during the last DODEA-Pacific Far East tournament in November 2019 at Humphreys.

Just three months later, on Feb. 20, 2020, the Far East basketball tournaments were canceled after one day due to the pandemic’s onset. Far Easts haven’t resumed since, other than a few virtual ones.

FitzGerald said she and her teammates were talking about just that en route from Sasebo Naval Base to Tokyo for the YUJO. “I told them to cherish this, because you never know with COVID” what might happen. 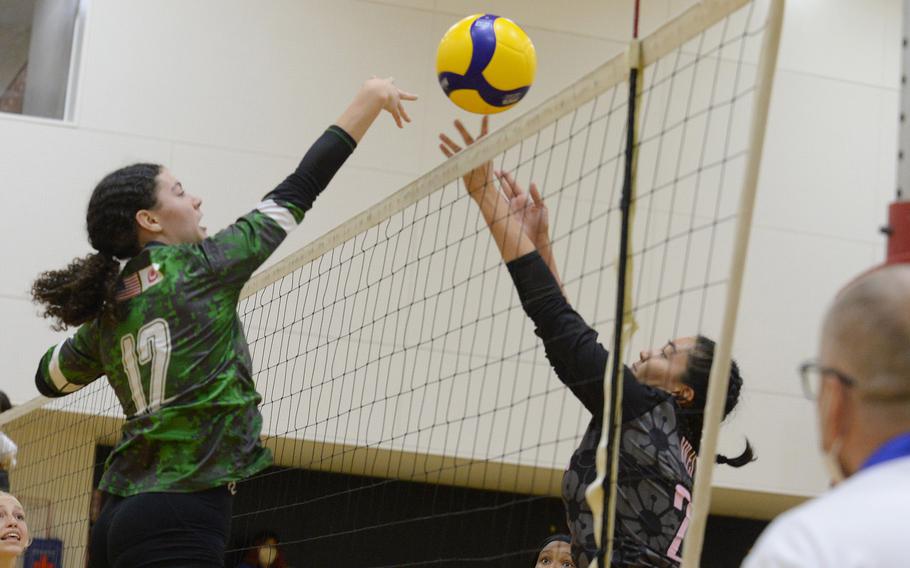 Kubasaki’s Olivia Schaffeld and Nile C. Kinnick’s Jenia Viles battle at the net for the ball. (Dave Ornauer/Stars and Stripes) 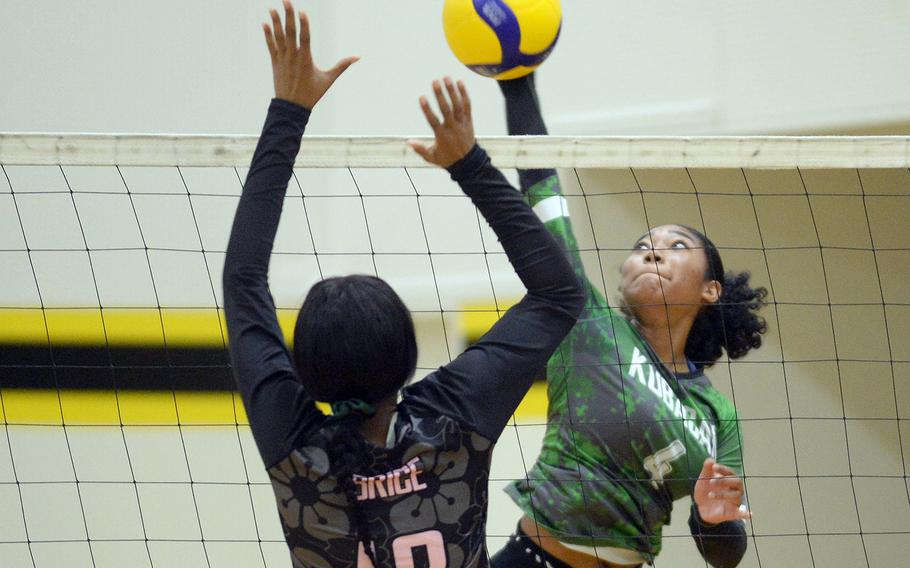 King is one of three headliners in the girls field:

-- The Cobras entered the tournament 20-0 and only dropped one set to Zama two weeks ago.

-- Four-time Far East Division I champion Kubasaki is 6-0 this season, losing a set in different matches to winless Kadena.

-- And Seisen International, also a four-time Far East D-I champion, is 10-0 and the Phoenix only have lost two sets.

King and Seisen will square off in Friday’s first match, in what could be a preview of a later playoff showdown. “That should be interesting,” FitzGerald said.

“I told the girls, what you did yesterday doesn’t matter,” Cobras coach Ricky Andrew said. “All that matters is what you do today.”

Those three teams and five other DODEA squads playing here will also meet up in the DODEA All-Japan tournament Oct. 27-29 at Kubasaki. Yokota coach Veronica Pascoe said she and her Panthers are calling the YUJO tournament “our pre-Oki.”

Of the six boys teams in the tournament, none are DODEA-Pacific; in fact, boys volleyball is not a Far East tournament sport.

Seoul Foreign plays against DODEA opponents Humphreys, Osan and Daegu in the Korean-American Interscholastic Activities Conference, which has operated since 1972. ASIJ, St. Mary’s and Christian Academy Japan are trying boys volleyball for the first time.

There are two weekends left in the football season as well, with a couple of games on Friday’s slate key to the participants’ fortunes.

-- Nile C. Kinnick is trying to snap a five-game losing streak when it travels to Kubasaki for Friday’s Japan D-I semifinal. The winner then visits Kadena on Oct. 28 for the D-I championship.

-- Yokota visits Zama, just two weeks after the teams battled into two overtimes at Yokota, with the Trojans coming out ahead 7-6, helped by a game-saving pass deflection by Hiroki Davis on a Panthers’ two-point conversion attempt.

“It was a matter of literally inches,” Panthers coach Michael Woodworth said. “That’s football. Now, this is their homecoming. It’s going to be a super-charged atmosphere. Those are the kind of games you want to go in and win.”

A win for Zama would give them the best record among Division II schools in Japan, but coach Scott Bolin said he and his Trojans aren’t taking a thing for granted.

“The team was focused and intense before practice,” Bolin said Thursday, the day before the game. “They know what’s on the line and want to perform for their home crowd after a month on the road.”