Getting tuned up for season-ending tournament 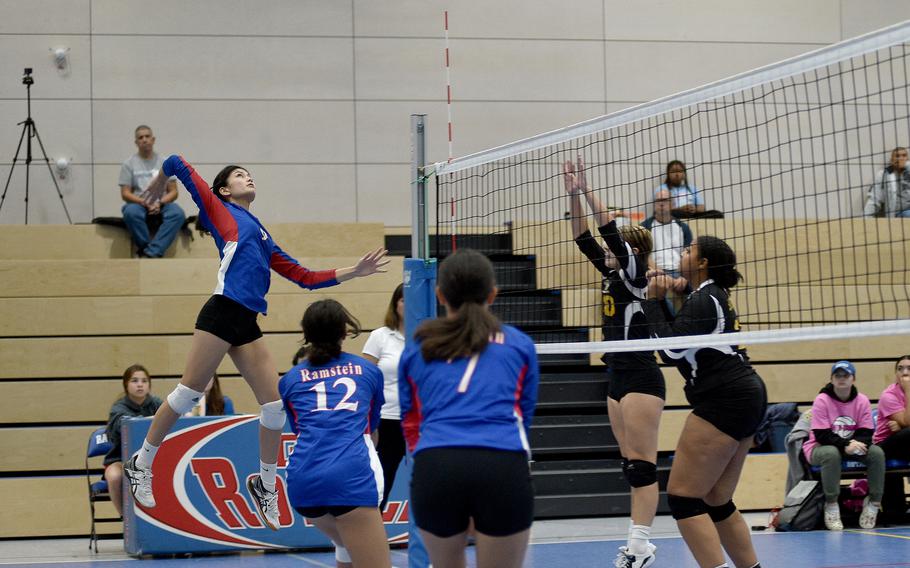 Ramstein’s Sophia Schluth prepares to spike the ball as teammates Jodia Relojo and Keilani Gonzalez watch during the Royals’ match against Stuttgart on Saturday at Ramstein Air Base, Germany. The Panthers’ Icsiss Perez, right, and a teammate prepare to block at the net. (Matt Wagner/Stars and Stripes)

RAMSTEIN AIR BASE, Germany – Stuttgart found itself in a deep hole.

Having already lost the first match to Kaiserslautern in straight sets during a tri volleyball meet Saturday at Ramstein High School, the Panthers trailed the host Royals by two sets and seven points midway through the third.

Coach Bethany Trimble called a timeout and challenged her Panthers.

“I said, ‘You get to decide how you want to end the day. You can end with fighting, whether that’s a win or a loss, or you can end it with just a terrible day of volleyball. That’s entirely up to you,’” Trimble said.

The Panthers (5-5) jumpstarted their match by winning long volleys, thanks in large part to big digs on defense. Ayana Gomez totaled 15 digs, while Isabella Whaley added an additional 12.

But perhaps the most emphatic one came during the fifth set. With Stuttgart leading 6-3, a Ramstein spike had the Royals (7-4) celebrating a potential turning point. That is until middle blocker Icsiss Perez, who had served, sprawled to keep the play alive. Eventually, teammate Ainsley Baker finished the point with a kill, giving the Panthers a four-point advantage. 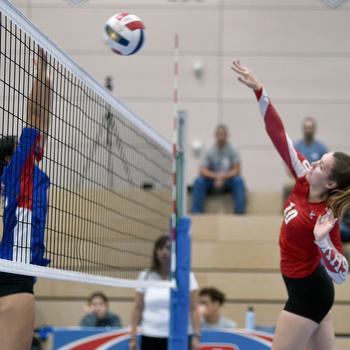 Kaiserslautern’s Mariska Campbell hits the ball during the Raiders’ match against Ramstein on Saturday at Ramstein Air Base, Germany. (Matt Wagner/Stars and Stripes)

The Royals did claw it back to 10-9 later in the set, but Gomez collected one of her 10 kills and posted an ace to make the lead insurmountable.

“We decided to work together,” Berea Bryan said of how Stuttgart turned it around. “We just took a deep breath and moved on from our previous mistakes.

“I think we just calmed down and stopped thinking about winning. We just thought about where we are at the moment and take it point by point.”

Prior to the comeback, Ramstein was cruising toward a win on its senior day.

Coach Kandel Baxter said the Royals had dropped sets earlier this season and managed to win matches, but the Royals were unable to stop the snowball once Stuttgart got rolling. She said the team will learn from the loss heading into the DODEA European Championships in less than two weeks.

“Volleyball is about peaks and valleys, and you got to be able to dig yourself out because you’re not always going to be on top,” Baxter said. “You are going to have to figure how to dig yourself out of situations, and I only get two timeouts. A lot of that comes from the motivation from the girls.”

Stuttgart, meanwhile, was buoyed by its comeback victory. Trimble said her players now know they can will themselves to victory.

“Our goal has been to get better every week, and for that first chunk of the day, we were not better than we were last week,” Trimble said. “But the mental toughness side at the end of it was huge. To be able to know you can be down and come back and get a win if you turn it around at one specific point is a big mental push going into the tournament.” 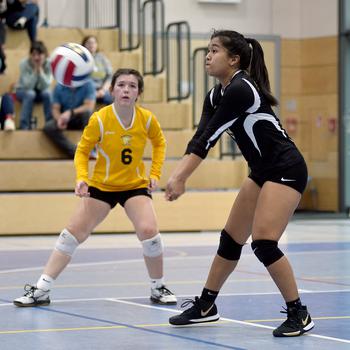 Stuttgart’s Ayana Gomez prepares to hit a ball during the Panthers’ match against Kaiserslautern on Saturday at Ramstein Air Base, Germany. (Matt Wagner/Stars and Stripes)

The team hurt most by the second match might have been the most dominant one on the court Saturday.

Kaiserslautern (12-2) waited more than three hours between its 25-15, 25-14, 25-17 opening win over Stuttgart and the last match of the day against crosstown rival Ramstein.

While the Raiders won in straight sets 25-21, 25-15, 25-17, it took them a while to find their rhythm. Trailing by as many as four points twice in the first set, they didn’t pull away from the Royals until scoring the last four to clinch it.

Kaiserslautern coach Zac Robinson said it was a good lesson for his squad to learn prior to the European championships, which will feature long breaks between play.

“We do have to sit around at the tournament and all of the sudden be ready to play,” Robinson said. “We definitely experienced that today. We sat and sat, and then we hopped out there and we were very flat of the first part of the first set, really had to get ourselves going again.”

Once the Raiders got going, though, they proved to be too much, thanks to a potent attack that spreads the load. Piper Nowlin had 11 kills over the two matches. Mariska Campbell had six in the win over Stuttgart, while Sage Barnes added six in the win over Kaiserslautern.

“We’ve definitely been going hard on our offense,” said Se’maiya Farrow, who paced Kaiserslautern with 11 aces over both matches. “Not only that, we work together on how to place the ball properly but also be aggressive at the same time.”

The Warriors still have one weekend to go before the tournament, but they have their sights set on the grand prize.

Both Nowlin and Farrow said finishing third last year is motivating them when the tournament comes to the Kaiserslautern Military Community on Oct. 27.

“This season is just preparation for the tournament because that’s what really matters,” Nowlin said. “We want No. 1, we want the trophy and I think we’re going to get it.”