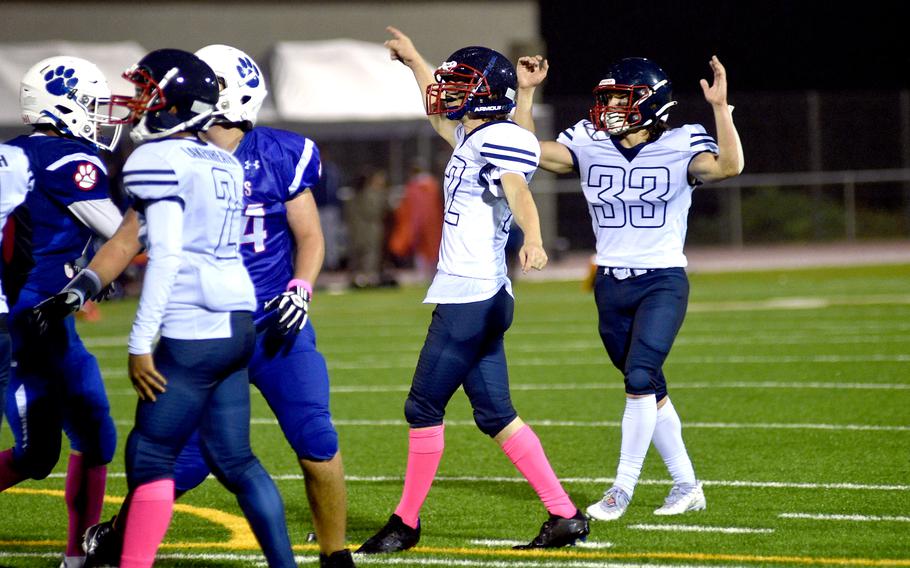 RAMSTEIN AIR BASE, Germany – Lakenheath’s Matthew Thomas Donalds has a peculiar nickname, J.J., given the lack of the letter in his name.

It stems from his older brother, Joseph, who also played kicker for the Lancers. Donalds, however, hadn’t followed in his brother’s footsteps through three-and-a-half years of high school.

Until Friday evening, that is.

With the game tied at the 9-minute, 3- second mark of the fourth quarter at Ramstein, “Joseph Jr.” stepped up and drilled a 20-yard field goal, proving to be the game-winner in a 10-7 victory.

“My freshman year, I didn’t follow his legacy, but this game, I had to step up and I took after (my brother),” Donalds said.

“I haven’t had too much practice. I have a great team behind me, great coaches, I have a great long snapper and a great holder, and if they do their job, I can do mine. I just have to do my job for them.”

Donalds’ field goal came after the Lancers (6-1) turned the game on its head late in the third quarter.

Ramstein (2-5) set up to punt from its own 36-yard line when junior Lucius Bowman got through the line to block it. Lakenheath started the drive at Royals’ 17. A delay-of-game penalty at the 6-yard line stalled the Lancers, and Donalds went in to take the kick in less-than-ideal weather – although the senior said it was nothing new for the team from England.

“The conditions and bringing in a new kicker, the pressure with the game being tied … for him to stay clam under that pressure was huge for us,” Lancers coach Gabe Feletar said. 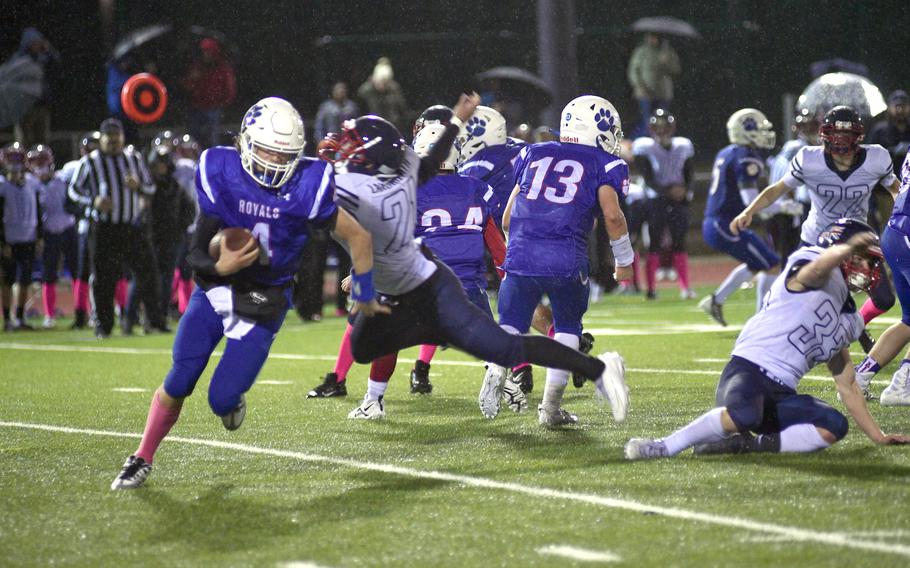 Ramstein quarterback Lucas Hollenbeck rolls to the right while Lakenheath’s Lucius Bowman dives at him during Friday evening’s game at Ramstein, Germany. (Matt Wagner/Stars and Stripes)

Pressure was something both defenses brought throughout the game, and it played a major role in stymieing both offenses.

The Royals harried quarterback Nico Marchini, causing three turnovers. One of those came late in the second quarter as Lakenheath was driving to take a lead. At the Ramstein 20-yard line, the defense forced a strip-sack of Marchini to end the threat.

Senior Brody Hall also picked off a pair of passes – one as the Lancers were in Ramstein territory right before halftime and the other on Lakenheath’s first drive of the second half.

“We do a lot of game film breakdown, so we knew we had to put pressure on him because he is a good thrower,” Ramstein coach Carter Hollenbeck said. “If he had time to sit there, he’ll pick us apart, and he did a couple times. We put a lot of pressure on him for a reason.” 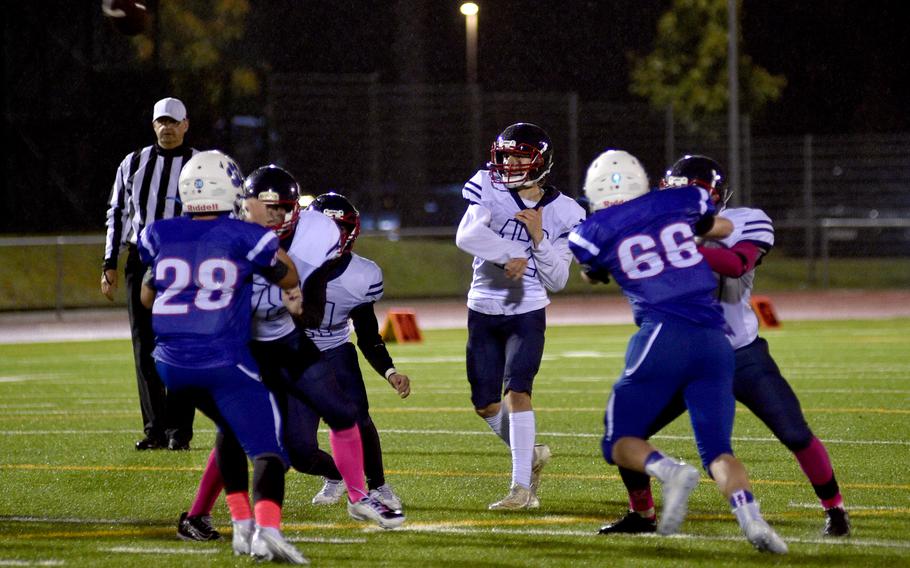 Not that Lakenheath was on its own with key turnovers.

Ramstein had taken the ball from its own 39 to the Lancers’ 34-yard line after Donalds’ field goal in just four plays. When quarterback Lucas Hollenbeck tried to connect with Liam Delp on a pass, however, defensive back Dante Thompson picked him off. The junior also iced the game with a second interception inside the final minute.

“He hasn’t done a ton on defense, missed a few tackles, but we said we need someone on defense to step up this game and make a difference,” Feletar said of Thompson. “I guess he took that to heart. To see him do that, especially at the end right there, it’s huge.”

With both teams’ playoff seeds already secure heading into the game, neither team had much to play for.

Each coach noted that didn’t stop his team from going for the win. And both Donalds and Feletar credited Ramstein, which lost to Lakenheath by 38 points earlier in the season, for showing vast improvement from the first matchup.

“It’s good for our team to have to battle like this,” Feletar said. “I think it’s going to help build our resilience for the playoff game, knowing what’s to come. A lot of credit to (the Royals). They’re way different than they were at the beginning of the year. So, just to see their growth is great.” 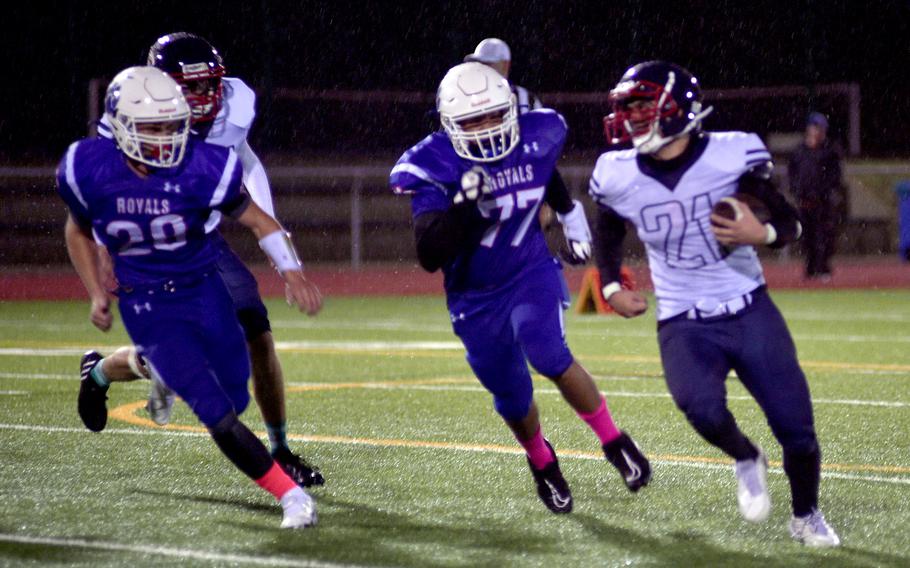