No longer perfect, but maybe better? 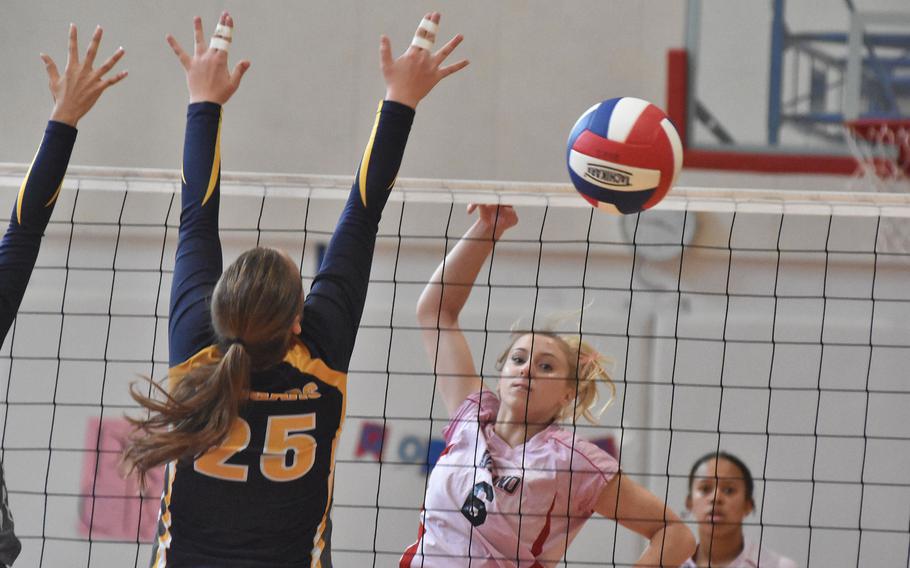 AVIANO AIR BASE, Italy – Less than two weeks before the start of the DODEA-Europe volleyball championships, the Ansbach Cougars and Aviano Saints each entered Saturday’s play unbeaten.

Neither left that way after splitting a pair of matches. But the head coaches of both teams now feel they’re better prepared for their respective tournament play.

“Aviano’s an excellent team,” Ansbach coach Deb Keller-Mitchell said after her team handed the Saints’ their first loss with a 25-23, 13-25, 15-12 victory Saturday afternoon. “I love playing good competition. It just makes you better.”

“I think this is exactly the right time to be playing a team like this,” Aviano coach Michael Gros said. “We really need matches to get ready for the championships.”

Aviano will enter the Division II championships as one of the favorites along with Black Forest Academy, which hadn’t played a D-II opponent this year until facing off with Vicenza on Saturday.

But the Saints didn’t look like it in the first set of the second match, falling behind 9-0 and trailing 24-14 before a furious rally fell short. Some of that was due to Ansbach’s hot serving – particularly that of Georgia Bryant – but a lot had to do with serve after serve going into the net for the Saints.

“They weren’t mentally prepared for the match,” Gros said of his team, which sat and watched the Saints’ boys play against American Overseas School of Rome between matches. “They learned that will cost them. It’s a good thing for us right now.”

Aviano bounced back in the second set, but the Cougars tallied the final three points of the match to start celebrating. 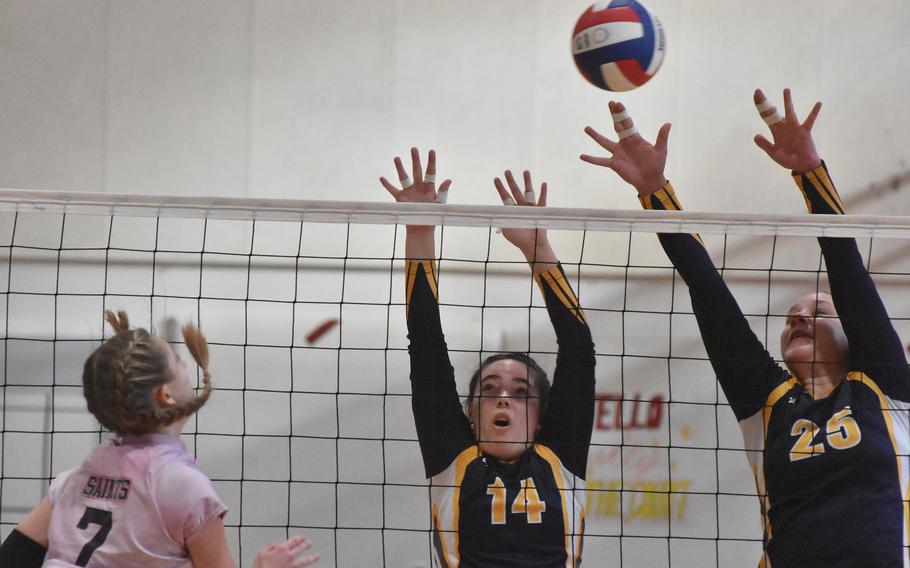 Aviano's Elaina Holsclaw gets a shot past the Ansbach duo of Georgia Bryant, left, and Kennedy Kohrs on Saturday, Oct. 15, 2022, as the two previously unbeaten teams split a pair of matches. (Kent Harris/Stars and Stripes) 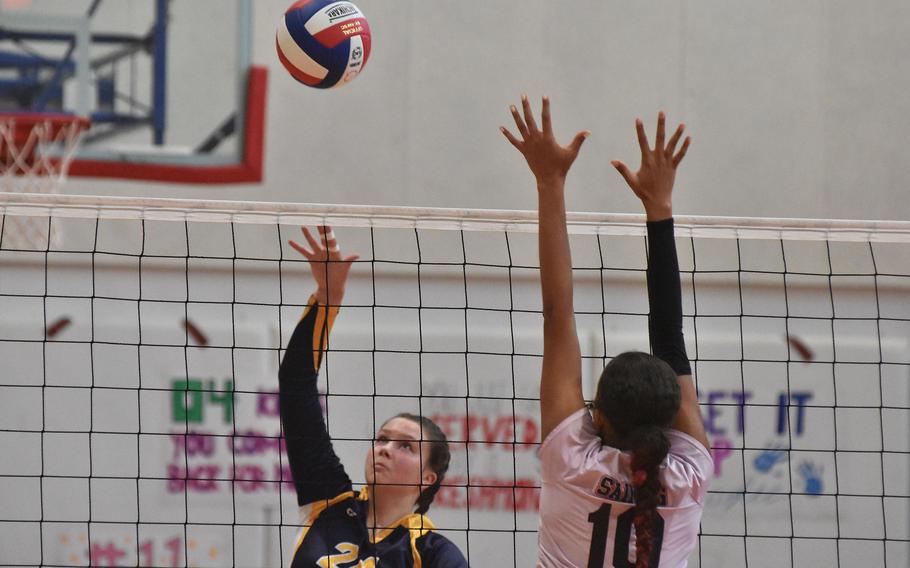 Ansbach freshman Kennedy Lange uses a soft touch to get by the block of Aviano's Sophia Fisher on Saturday, Oct. 15, 2022. (Kent Harris/Stars and Stripes) 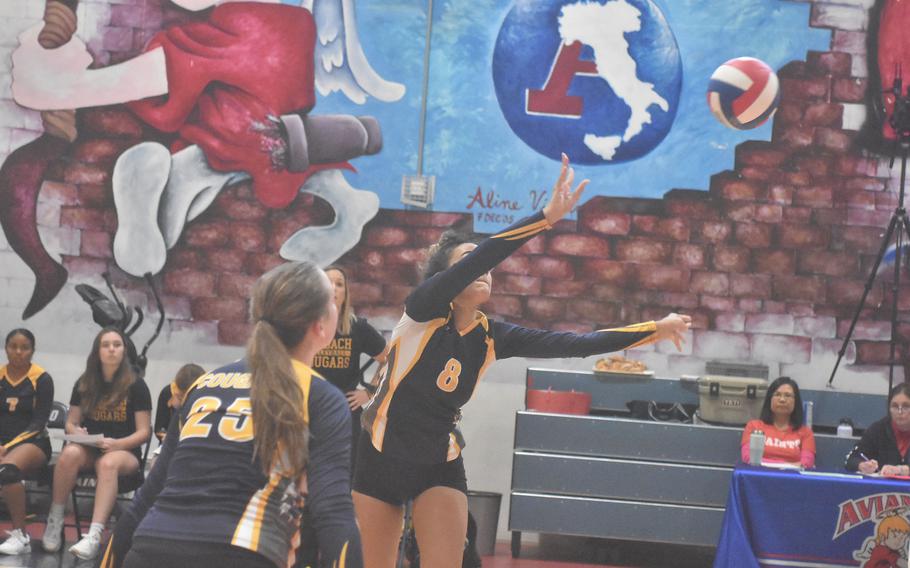 Ansbach's Laila McIntyre pushes the ball over the net Saturday, Oct. 15, 2022, in a match against the Aviano Saints. (Kent Harris/Stars and Stripes) 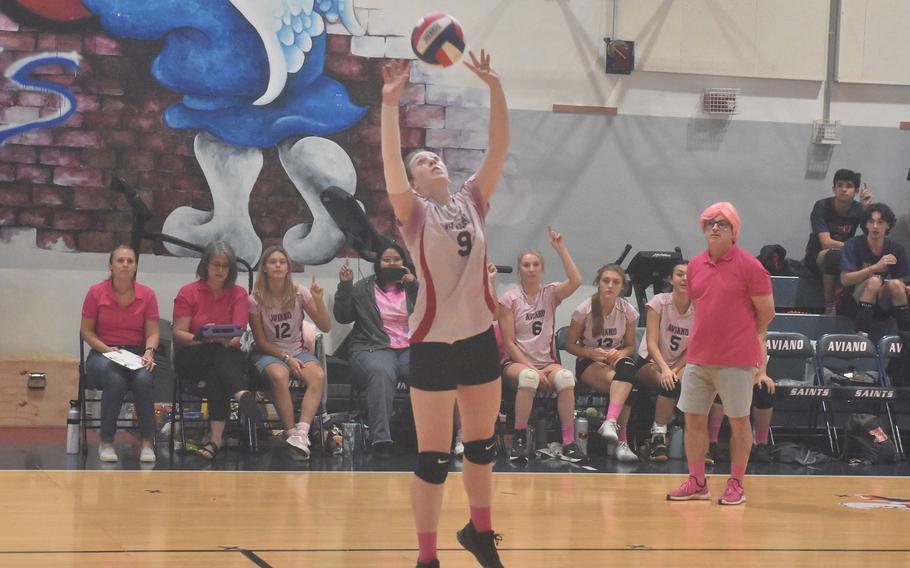 Aviano's Sophia Fisher squats low in order to return a ball from the other side of the net as the Saints split a pair of matches Saturday, Oct. 15, 2022, with the Ansbach Cougars. (Kent Harris/Stars and Stripes) 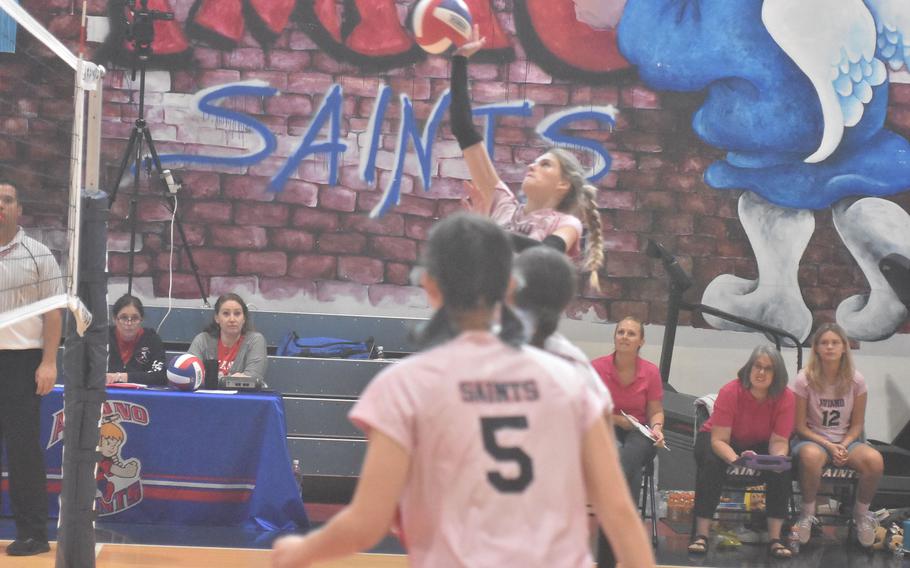 Aviano's Jaycee Spence looks like she might have wings like the Saints' mascot while leaping before taking a swing against the Ansbach Cougars on Saturday, Oct. 15, 2022. (Kent Harris/Stars and Stripes) 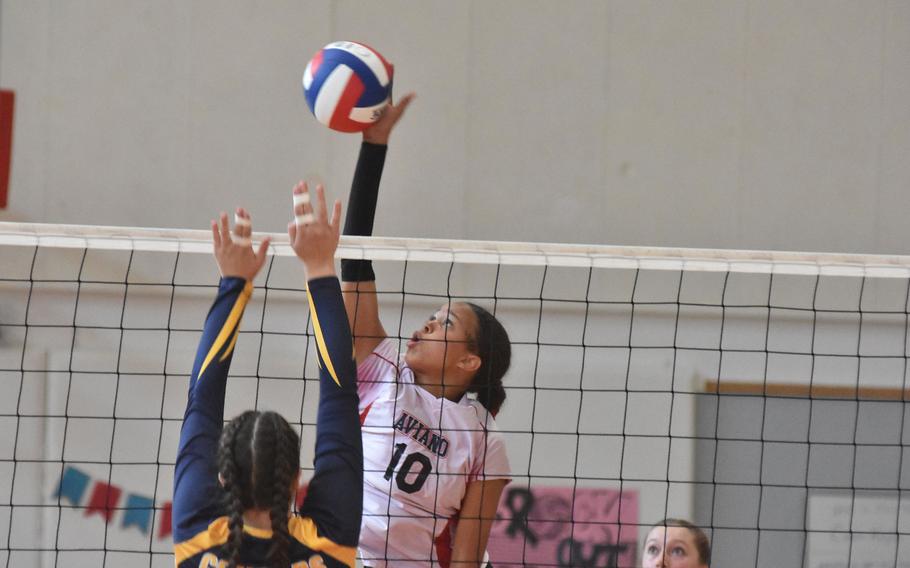 “We’re pretty mentally tough,” Keller-Mitchell said of her Division III squad, which could enter its tournament as the top seed. “Or we’re getting there at least.”

Aviano helped a bit with that by handing the Cougars the loss to open the day. The Saints pulled in front to stay in the middle of the first two sets, with Kayla Graney’s kill ending the opening set and Sophia Fisher’s kill the second.

Kennedy Kohrs’ kill gave Ansbach a 10-5 advantage in the third set and Aviano got no closer than trailing 19-17. The Saints rallied to tie the fourth set at 18-18 before Fisher went to work, scoring three kills – including the match-winner – in the final moments.

Ansbach 6-foot freshman Kennedy Lange impressed during the matches, keeping the Cougars fairly even at the net despite the presence of Aviano’s taller and quick-leaping lineup.

“She’s young, but she’s got a wise soul,” Keller-Mitchell said of Lange, the daughter of assistant coach Aime Lange. “She grew up around the game. But she’s worked really hard to make herself a six-position player.”

Aviano visits Vicenza next weekend and Ansbach hosts Hohenfels. Both teams then start tournament play in the Kaiserslautern Military Community on Oct. 27.