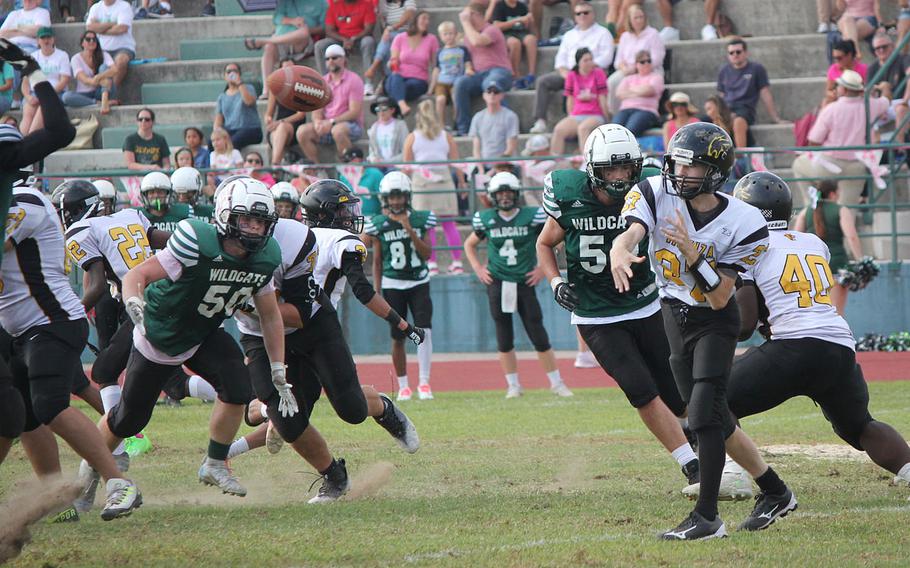 Vicenza quarterback Logan Sistare gets a pass off before Naples defenders are able to close in Saturday, Oct. 8, 2022, in the Wildcats' 42-0 victory over the Cougars. (Nadia Shimasaki/Special to Stripes)

NAPLES, Italy — In one respect, the Vicenza Cougars clearly lost their DODEA-Europe Division II football game with Naples on Saturday.

The Wildcats, the prohibitive favorites to win the Division II championship this season, stayed unbeaten with a 42-0 triumph that was never in doubt.

The Cougars could take all kinds of lessons from the loss, though, coach Jesse Woods said.

Determination to start with. Maintaining discipline and focus would be good, too. Experience will come.

“They need to compete regardless of the outcome,” Woods said.

That outcome was quickly determined by two quick touchdowns by the Wildcats minutes into the first quarter that – coupled with a blowout loss to the Wildcats earlier this season – seemed to suck out all the air for the Cougars, who then struggled to ever gain any momentum.

“It took the wind out of their confidence, chopped it down real quick,” Woods said. “We were really outmatched today.”

That’s been the case all season for Naples’ three opponents, who have been outscored 205-31 in five games. All 31 of those points were scored by Aviano in two lopsided losses. 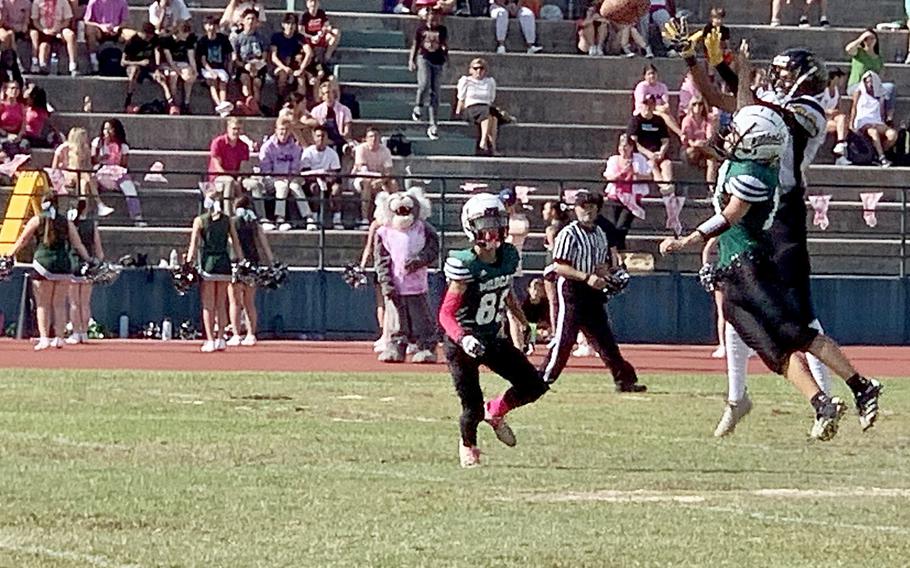 Naples defenders seemed to be everywhere Saturday, Oct. 8, 2022, disrupting plays and keeping Vicenza off the scoreboard. (Alison Bath/Stars and Stripes) 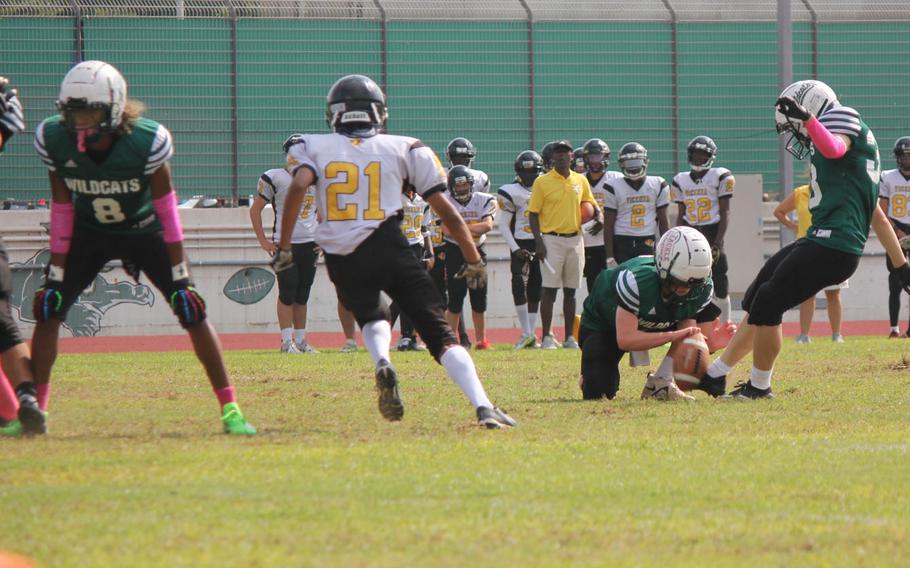 Naples' Henri Schneider puts toe to foot for the Wildcats' in their 42-0 victory over the Vicenza Cougars on Saturday, Oct. 8, 2022. Schneider has gotten in a lot of practice kicking PATs this season for the high-scoring Wildcats. (Nadia Shimasaki/Special to Stripes) 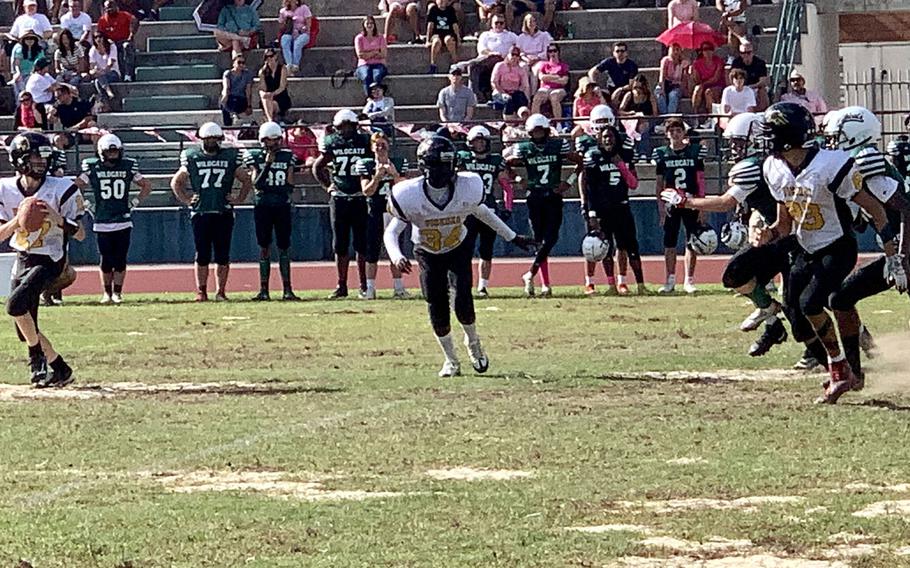 Vicenza quarterback Logan Sistare looks for an open receiver down field in the Cougars' 42-0 loss to the Naples Wildcats on Saturday, Oct. 8, 2022. (Alison Bath/Stars and Stripes) 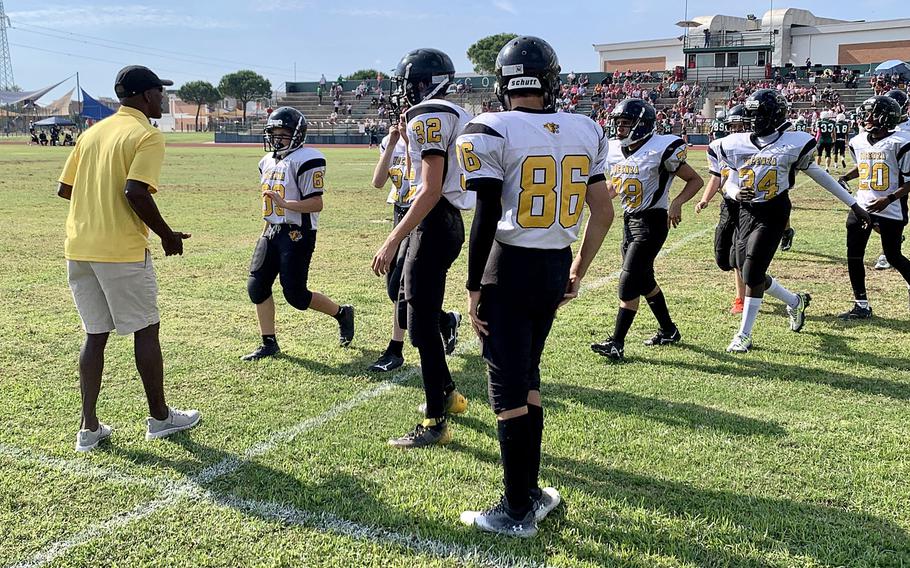 Vicenza coach Jesse Woods tries to get his team to follow the script during the Cougars' 42-0 loss to the unbeaten Naples Wildcats on Saturday, Oct. 8, 2022. (Alison Bath/Stars and Stripes)

Naples’ Robert Oliver scored the game’s first touchdown minutes after kickoff. His brother, Gary, followed soon after with another touchdown for the Wildcats.

Caden Averill had a 20-yard receiving touchdown for the Wildcats that was quickly followed by another touchdown by Cameron Collins.

Quarterback Camden Kasparek would finish by completing three of four passes for 51 yards and one touchdown.

“It all starts with everybody doing their job, making it easy for me to do mine,” said Collins, a 17-year-old senior who believes Naples has a good chance of taking the title if they don’t get complacent.

The Cougars knew Saturday would be tough, said Sara Fitch, a 17-year-old punter for Vicenza. Their first game against the more experienced, disciplined Wildcats ended at 44-0, she said.

But that first quarter scoring flush also worked against the Wildcats, who seemed to lose some focus, scoring just once more before halftime to take a 42-0 lead into intermission. That differential was enough to trigger DODEA-Europe’s mercy rule.

“They let the scoreboard dictate their play rather than playing every down like it was 0-0,” Naples coach Jim Davis said.

Still, Saturday showed Naples football at its finest, said 17-year-old Gary Oliver, who plays the running back and linebacker positions.

It’s been a challenging season for the Cougars, whose 34-player roster is mostly made up of first-year players, Woods said. That lack of experience shows.

For example, a promising drive late in the game ended when a pass was intercepted by Naples, dashing any hope of Vicenza getting on the scoreboard.

Still the Cougars will play at least two more games this season. A game Saturday at Aviano will determine which of the two teams hosts the other in one Division I semifinal on Oct. 22. The winner of that game will take on the Naples-Rota winner. The Wildcats would host the Oct. 29 championship game if they defeat the winless Admirals for the third time this season.