Stuttgart’s Mark Heinz tees off on the No. 11 hole Thursday during the DODEA European golf championships at the Rheinblick Golf Course in Wiesbaden, Germany. (Matt Wagner/Stars and Stripes)

WIESBADEN, Germany – Winning one individual title in any sport isn’t easy. Winning two in a row is even harder.

Not only has Stuttgart’s Mark Heinz done just that, he also can say nobody has defeated him in his high school golf career.

The Panther sophomore cruised to a second-straight DODEA European golf crown on Thursday with a total of 80 points at the Rheinblick Golf Course in Wiesbaden, Germany. It extended his unbeaten streak to two straight years.

“Really special,” Heinz said of the streak. “It feels really good to (be unbeaten).”

Heinz opened the second day of the tournament with an eight-point advantage in the modified Stableford scoring system that gives those with the fewest strokes the most points.

He continually increased that lead until it grew to 21 points after he stepped off the green on the No. 18 hole. Naples’ Casper Waldeck finished in second with 59 points, while Wiesbaden’s Tristin Kim came in third with 55.

While the course proved to be a challenge to many, it was sometimes the shorter holes that gave Heinz his biggest issues, he said.

The sophomore bogeyed and double-bogeyed the 156-yard, par-3 No. 11 hole over the two days. He said he hadn’t been hitting his irons well recently, which is why he struggled there. 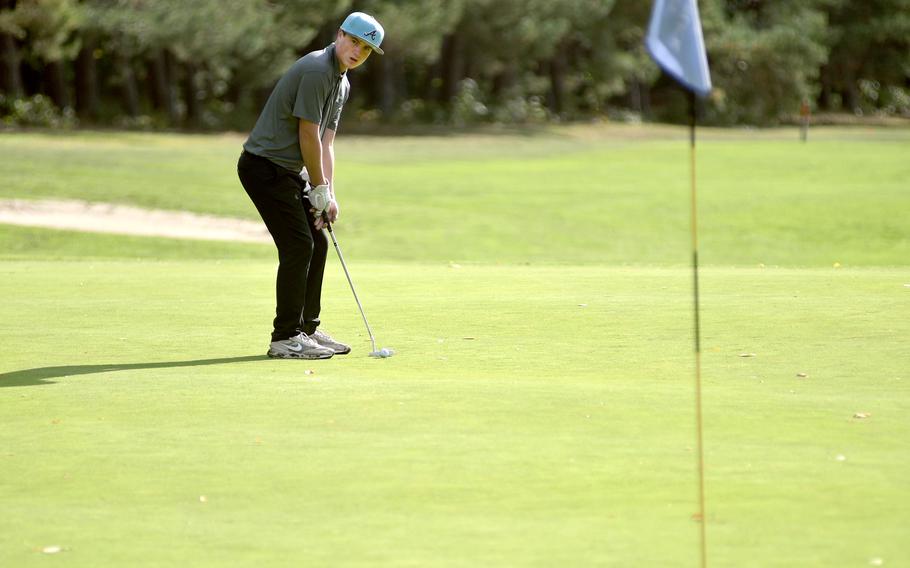 Brian Sanderson of Aviano prepares to putt on the No. 18 green Thursday during the DODEA European golf championships at the Rheinblick Golf Course in Wiesbaden, Germany. (Matt Wagner/Stars and Stripes)

Heinz made up for it on other holes. On another par-3 during Wednesday’s action, the No. 4 hole, he landed his drive near the pin and managed to collect a birdy.

It’s the type of performance Stuttgart coach Herb Silio has come to expect from Heinz.

“He’s just dedicated,” Silio said. “I see his seriousness about it. I see that he goes out there at least four, five days a week and just working on his game, working on his technique, and we’re seeing the dividends. He has some natural ability, but he knows he has to put in the hours. That’s how he gets it.

Now, Heinz can turn his attention to getting a rare three-peat. The sophomore, who said he wants to play golf in college, said that’s the next goal. 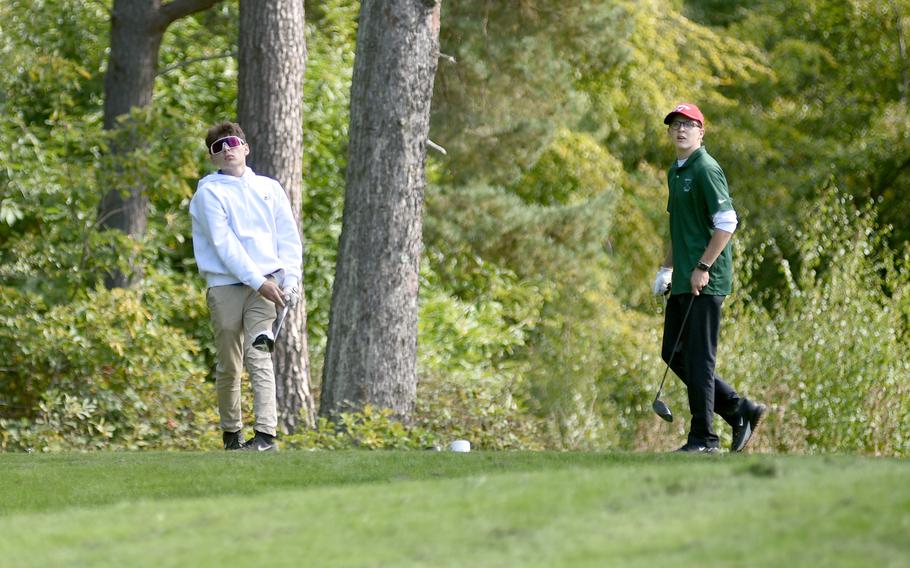 When the day was over and after nervous counting by both teams, the Royals were on top of the Warriors, 178-171.

First-year coach Kent Enyeart said the Royal golfers told him on the bus ride back to Ramstein on Wednesday they were going to bounce back. Led by tied-for-sixth-place finisher Christian McHugh, the Royals scored 98 points for the comeback victory.

“It’s pretty special,” Enyeart said. “We struggled yesterday, but they never lost their confidence. On our way home, they assured me, ‘Hey, don’t worry, coach, we got this.’ I knew it would be close. I know Wiesbaden’s got a very strong team, but in the end, the boys pulled it off.”

It marked the second consecutive European golf championship for the Ramstein boys. The Royals did it by getting four players in the top 10, despite having only one medalist. The top six finishers were honored with medals.

“I was the assistant coach last year, and to be able to carry on the tradition of what Ramstein is about and winning is real special,” Enyeart said. “It’s obviously a joy to coach these great bunch of kids – not only the ones that made the tournament here, but our whole team, the ones we had to leave behind.” Stuttgart’s Mark Heinz chips out of the bunker on the No. 11 hole Thursday during the DODEA European golf championships at the Rheinblick Golf Course in Wiesbaden, Germany. The Panther sophomore repeated as the individual champion. (Matt Wagner/Stars and Stripes)