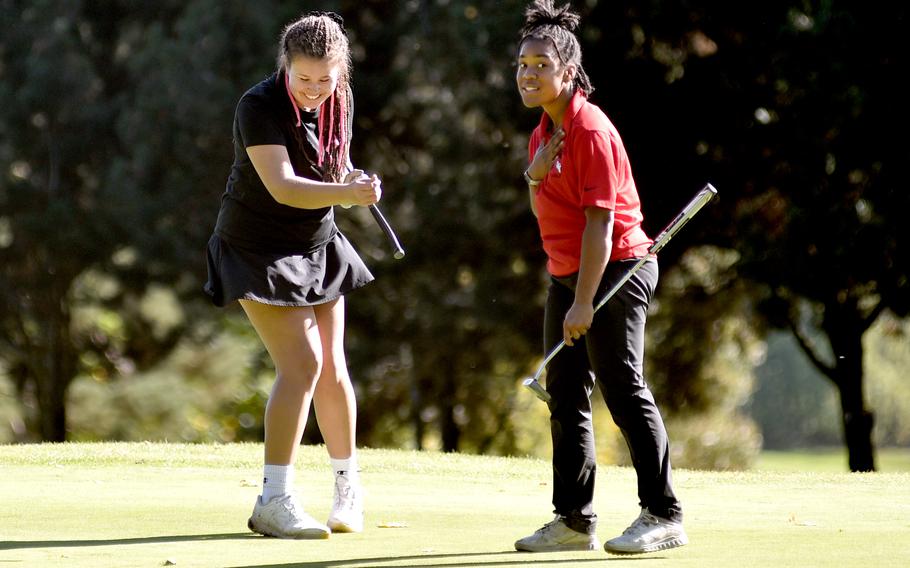 Stuttgart’s Tayor Kreimeier, left, and Kaiserslautern’s Asia Andrews share a laugh on the No. 18 green Thursday during the DODEA European golf championships at the Rheinblick Golf Course in Wiesbaden, Germany. (Matt Wagner/Stars and Stripes)

WIESBADEN, Germany – A runner-up finish at a sport’s season-ending championships would drive many athletes to take a step forward the following year.

Kaiserslautern’s Asia Andrews did just that Wednesday and Thursday. But she said she didn’t do it for herself. She wanted to get better for her team.

“It didn’t push me to want to be first, but I absolutely love my team and I want to do the best for them,” Andrews said of her second-place finish in 2021. “I think that was my drive.”

The sophomore amassed 34 points to win the individual title by 16 points at the DODEA European golf championships at the Rheinblick Golf Course in Wiesbaden.

Andrews’ score matched that of the next two competitors combined. Stuttgart’s Taylor Kreimeier and Rota’s Victoria Bonavita finished with 18 and 16 points, respectively.

Andrews did help the Raiders win the team title as Kaiserslautern was the only to school to produce multiple competitors.

She nearly doubled her total in the finals from last season, when she finished with 19 points. 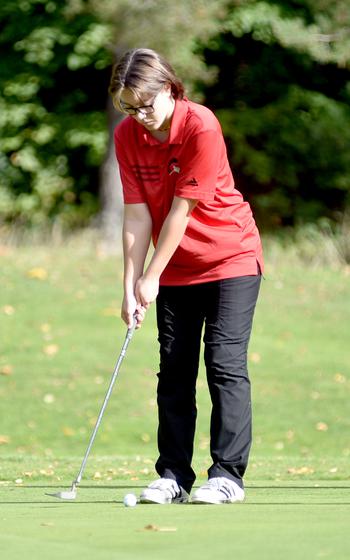 Kaiserslautern’s Reigen Pezel putts on the No. 18 green during the DODEA European golf championships at the Rheinblick Golf Course in Wiesbaden, Germany. (Matt Wagner/Stars and Stripes)

Her improvement from freshman to sophomore years has been evident to Kaiserslautern coach Andy Dager. He saw it on her first drive of the tournament, where she landed the ball within yards of the green. He said she would not have been able to do that last year.

“She’s obviously been practicing,” Dager said. “She’s been working in the offseason making sure she stays up on what she’s doing, and it shows.”

Not that she was without her struggles.

Andrews mentioned having issues with the par-3 No. 4 hole, when she hit into the hazard and had the ball bounce off the rocks. She also had a chip shot onto the green on the No. 9 hole that rolled down the hill, setting her back.

Andrews said she tried not to let those shots bring her down, nor let herself get too buoyed by the good shots. That even-keeled mentality worked, as she posted 19 points on Day 2 – four points better than her first round.

“I’m one to beat myself up,” Andrews said. “Especially being out here, the ground is hard, there are trees surrounding. So, you definitely have to take it with a grain of salt.” 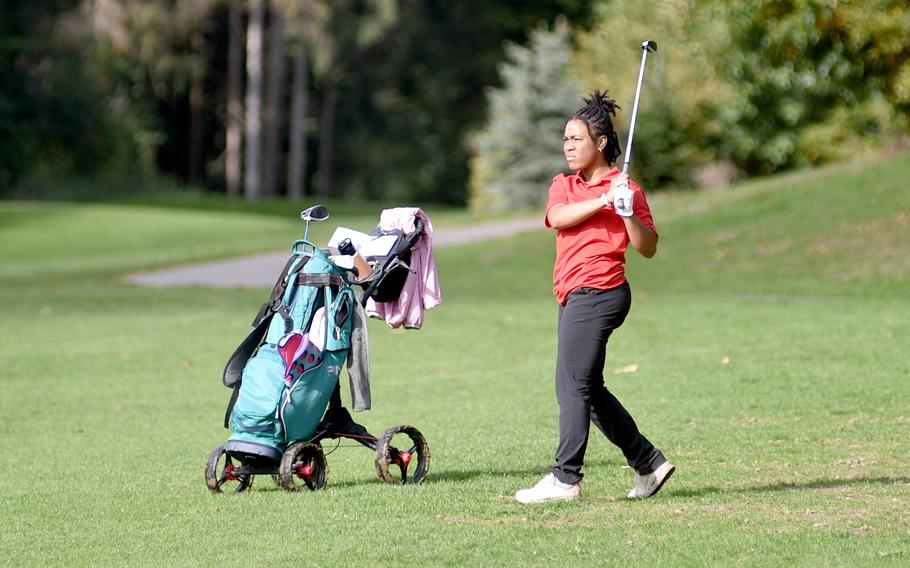 Kaiserslautern’s Asia Andrews watches her shot on the fairway at the No. 6 hole Thursday during the DODEA European golf championships at the Rheinblick Golf Course in Wiesbaden, Germany. The sophomore won the individual crown. (Matt Wagner/Stars and Stripes)

With a European championship under her belt, Andrews said she is looking forward to trying to defend her crown next year.

She said she also hopes the Raiders will get a chance to play on more courses next year.

“I’m hoping they send us to Rota or Lakenheath,” Andrews said. “We stayed within Germany this year, but I want to travel more and meet new people, play with new people.”