Stuttgart juggernaut rolls on in Kaiserslautern 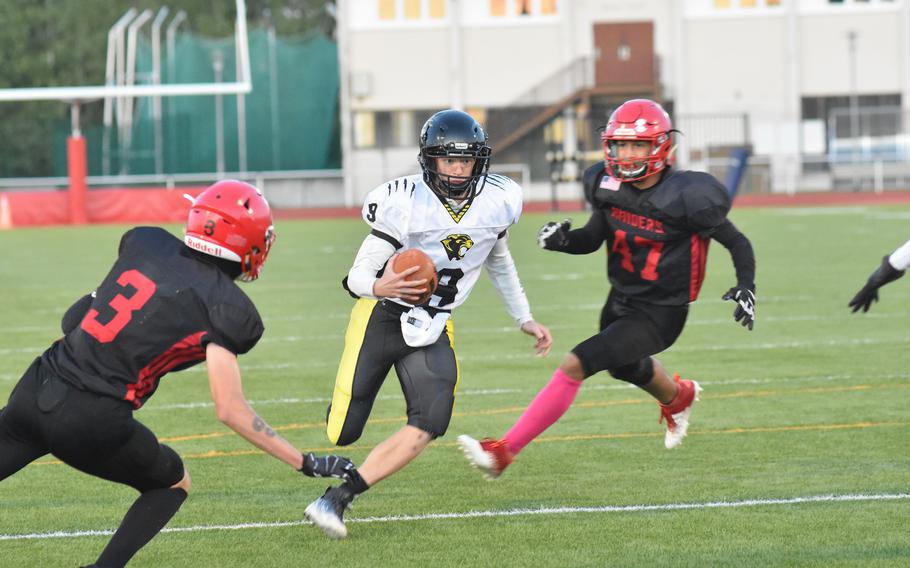 Stuttgart’s Caiden Ray looks for an opening while playing quarterback Friday, Sept. 30, 2022, against the Raiders in Kaiserslautern, Germany. The Panthers won 44-0. (Jennifer H. Svan/Stars and Stripes)

KAISERSLAUTERN, Germany – The Stuttgart Panthers stayed unbeaten and clinched a spot in the playoffs Friday night by shutting out Kaiserslautern 44-0

The defending DODEA-Europe Division I champions broke open the game early on the legs of senior running back and middle linebacker Trenton Jackson, who put the Panthers on the board with two back-to-back touchdowns in the first quarter.

On one of those scoring drives, Jackson caught a screen pass from quarterback Caiden Ray and sprinted about 80 yards down the field for a touchdown surrounded by a sea of Panther blockers.

“I turned around and I had my guys in front of me and green grass,” Jackson said of the play after the game. “Once they went and picked up their blocks, I knew I was gone.”

The Panthers had tried the play in practice “but it didn’t work,” Jackson said. Coach Bill Ratcliff “believed in us,” he said.

Jackson rushed for 88 yards and a score and caught passes for 98 yards and two scores for the Panthers (5-0), who guaranteed themselves a spot in one of the division’s semifinal games Oct. 21-22. 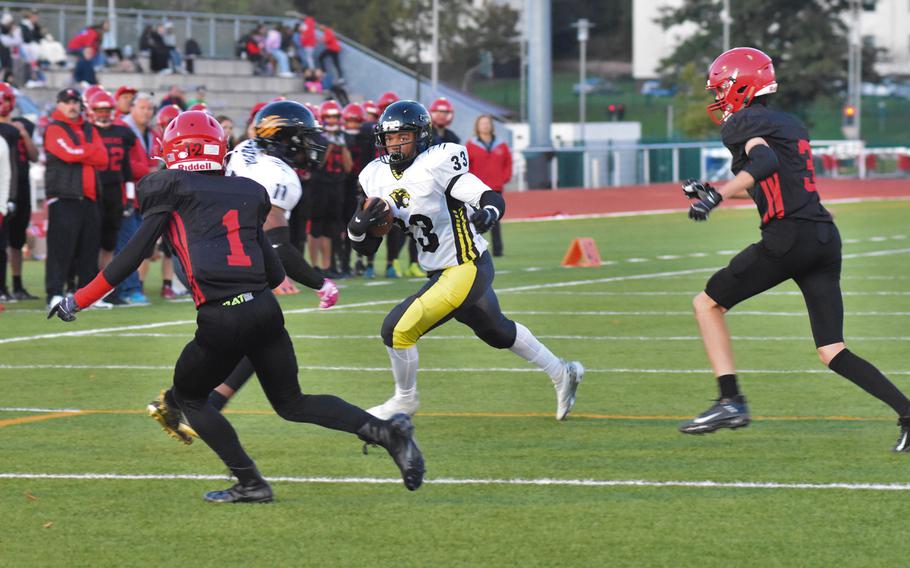 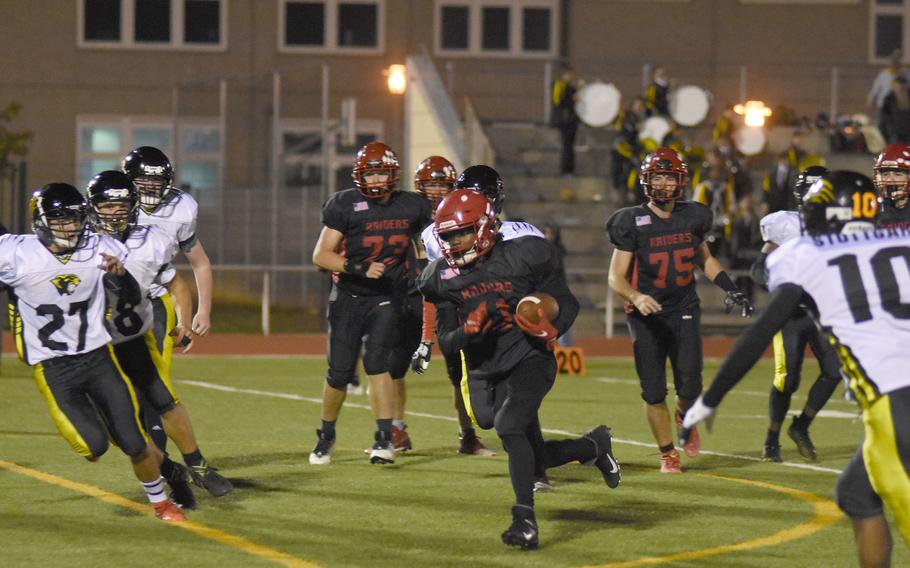 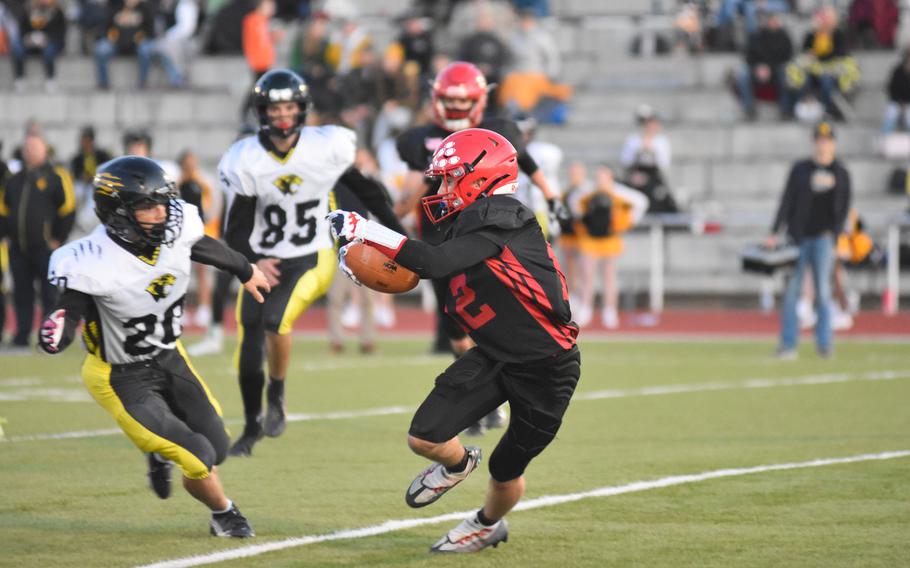 Kaiserslautern’s Aaron Potter carries the ball early on in a Friday night game against Stuttgart on Sept. 30, 2022, at Kaiserslautern, Germany. (Jennifer H. Svan/Stars and Stripes) 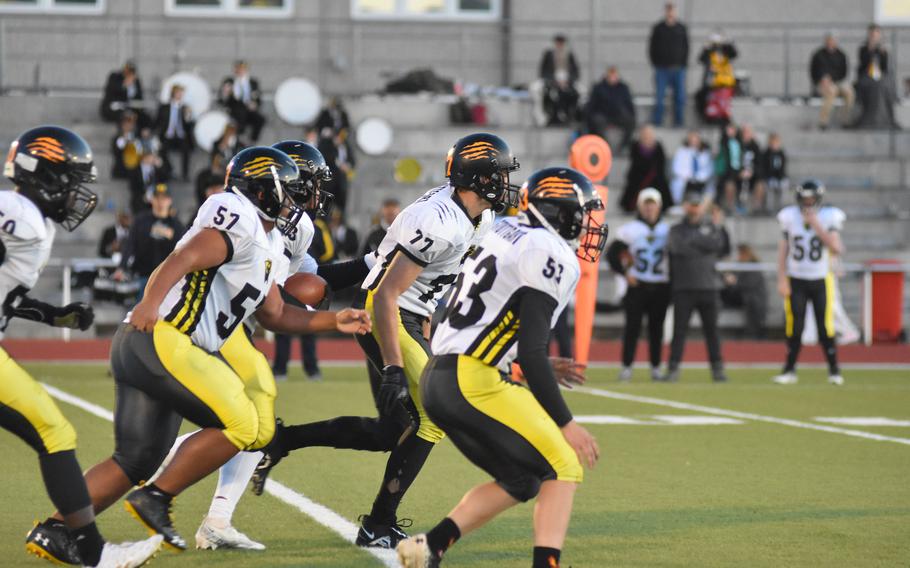 Stuttgart blockers surrounded Trenton Jackson as he runs down the field en route to an 80-yard touchdown run in the Panther’s 44-0 win against Kaiserslautern on Friday, Sept. 30, 2022, in Kaiserslautern, Germany. (Jennifer H. Svan/Stars and Stripes)

After putting up 14 points in the first quarter, Stuttgart continued to march down the field on almost every possession in the second quarter, starting with a short touchdown run by Ray from inside the 10. Ray, who passed for 150 yards on the night, tossed a short pass to Josh Zipperer for a two-point conversion to put the Panthers up 22-0. The two connected again on Stuttgart’s next scoring drive. A catch by Jace Holmes for another two-point conversion made it 30-0.

Ray and Noah Farey added scoring runs of more than 40 yards each and the rout was on.

By the end of the first half, Stuttgart had racked up 44 points. The mercy rule went into effect in the second half, ensuring a shorter second half with the clock not stopping.

It was the second time Stuttgart – stacked with 20 seniors on its roster - had faced a young Raiders team this season. “They have some tough, gritty players,” Ratcliff said. “We had an idea of what to expect. Our game plan took advantage of what we felt were weaknesses in their system.”

Kaiserslautern, with about three-quarters of its team comprised of underclassmen, are still learning, coach Robert Allen said.

“I’m proud of them for facing a team that has beaten everybody for two years,” he said. “We’re learning and we’re getting better.”

Sophomore Logan Bell started at quarterback for the first time. Another sophomore, Myles Steel, was the team’s leader rusher. Isaiah Rodriguez and Jayden Dayao, nursing an injury, made some key defensive plays for the Raiders, 1-4 on the season.

Gabe Tamez had six tackles and Jack Gruver five for the Panthers, with Tamez and Aiden Hanley each picking off passes.

Stuttgart could clinch home field advantage in the playoffs by defeating Vilseck next week. Kaiserslautern needs a Vilseck loss and a victory over the Falcons the following week to have a shot at the playoffs.