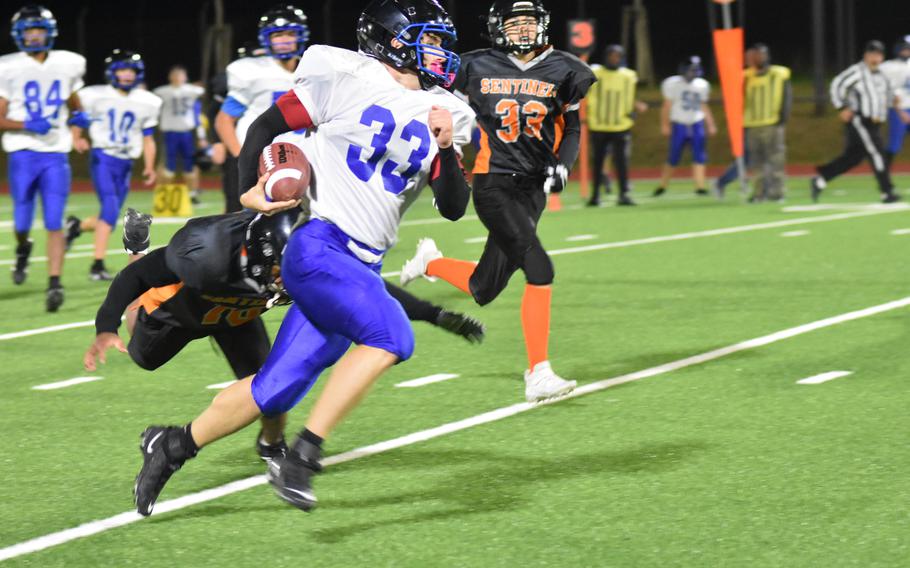 SPANGDAHLEM AIR BASE, Germany – After cruising to mercy rule victories in its first two games of the season, Brussels got all the competition it wanted Friday night.

The Brigands prevailed, 39-36, over the host Spangdahlem Sentinels in a Division III six-man football matchup, but only were assured the win as the clock ran out.

Brussels appeared to put the game away when senior William Pierce, who was unstoppable throughout the night, ran down the sidelines from about 70 yards out to give the Brigands an 11-point advantage with just over a minute left to play.

The Sentinels, however, refused to go quietly and answered with a Mikkos Brown touchdown on the first play after the ensuing kickoff. Makario Drummond drilled the ball through the goal posts for a two-point conversion, narrowing Brussels’ lead to just a field goal difference with 54 seconds on the clock.

Pierce ended Spangdahlem’s hopes for a last-minute upset before a vocal home crowd by scooping up the following kick and running well into Spangdahlem territory before he was tackled. The Brigands then ran out the clock to seal the victory. 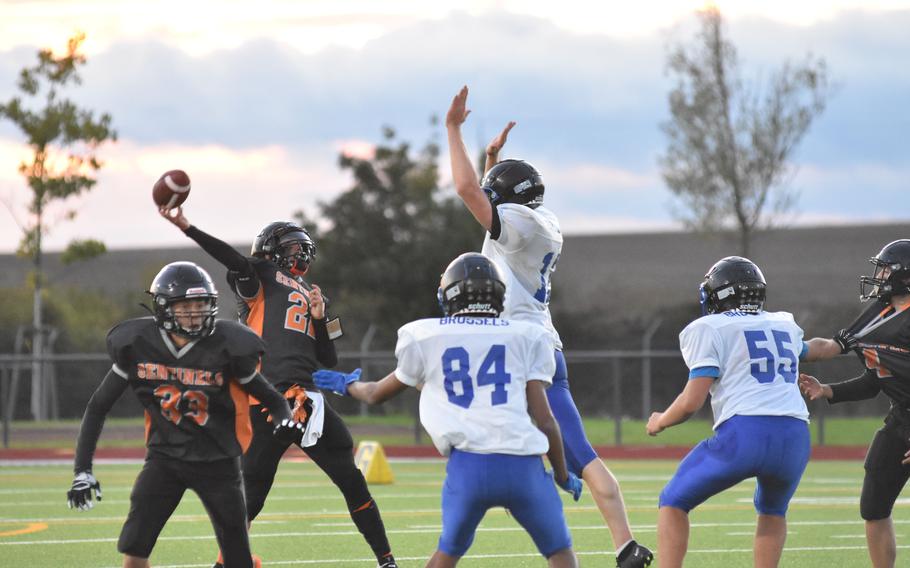 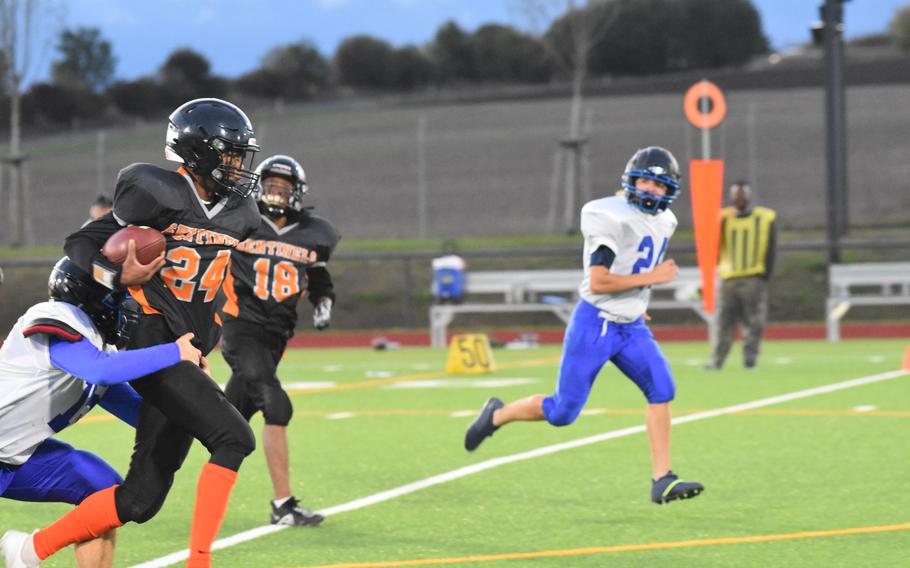 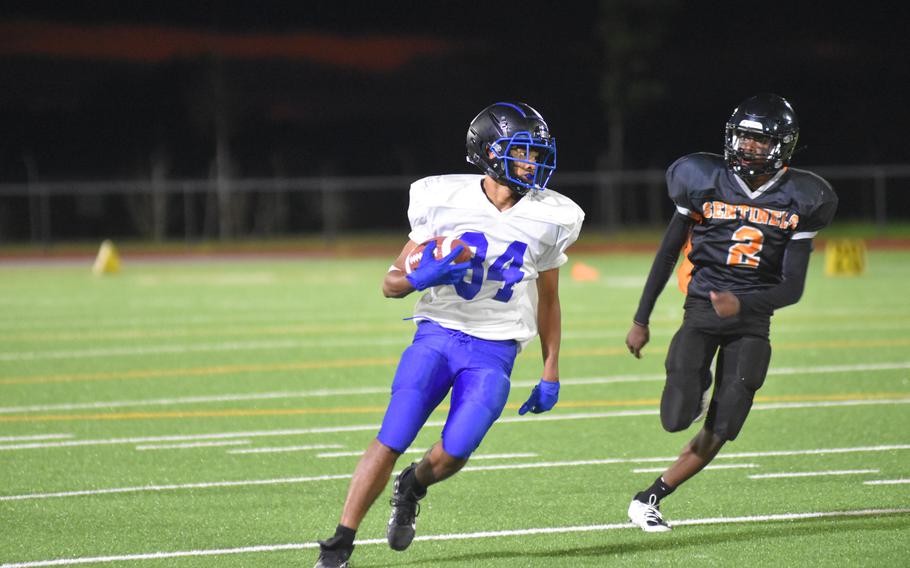 Brussels’ Jabriel Wells looks for an opening during Friday night’s game on the road at Spangdahlem Air Base, Germany. The Brigands won in a nail-biter, 39-36. (Jennifer H. Svan/Stars and Stripes)

“Every game’s a test but this was one we hadn’t seen in the previous two games,” Brussels coach Andrew Langenstein said. The Brigands showed “the character they have to band together and overcome anything. This was a new obstacle to overcome.”

Spangdahlem was the first team to be able to pass effectively against the Brigands this year, said Kevin Fremgen, who shares coaching duties with Langenstein.

Casey Supinger completed 14 passes for 333 yards for the Sentinels and five touchdowns. Robert Leggett caught five of them for 129 yards and MJ Brown caught two more for 118 yards and two scores.

“This one here was a nail biter,” Fremgen said. “There are some things we need to work on.”

Pierce said he was surprised Spangdahlem scored so quickly after his long touchdown run.

“It was nice having such a close game,” he said. “It definitely brought the adversity out in us.”

The Sentinels slowly clawed their way back into the game after falling behind 15-0 in the first quarter. With just under 2 minutes to go in the first half, they put their first points on the board when Supinger connected with Leggett for a touchdown pass.

Pierce answered with a punt return for a touchdown. But Spangdahlem was undeterred. Another Leggett carry and catch got the Sentinels down to the 9-yard line. Nate Johnson then ran it in for a touchdown and a 2-point conversion put Spangdahlem right back in the game, 21-14, at the end of the first half.

The Sentinels opened the third quarter strongly, with another Supinger-to-Brown touchdown and a successful 2-point conversion, putting Spangdahlem up for the first time, 22-21. Brussels eventually wrestled the lead back for good when a wide-open Mason Kleckner reeled the ball in deep into Spangdahlem territory and ran it in for a touchdown with 2:23 to go in the third quarter.

Despite the loss, Spangdahlem coach Terry Hoffman was proud of the Sentinels’ effort.

“They did not give up,” he said after the game. “I thought they would kind of give up when we went down by two touchdowns, but they fought back.”

Hoffman said Leggett played his heart out for the Sentinels. He played some at quarterback, “on defense he had a couple nice stops. He caught a couple touchdown passes. He never came off the field.”

Supinger led the Sentinels with 12 tackles while Mike Landers had 10 tackles and a pair of sacks and Leggett finished with seven tackles.