Runners on course for inclusive championships 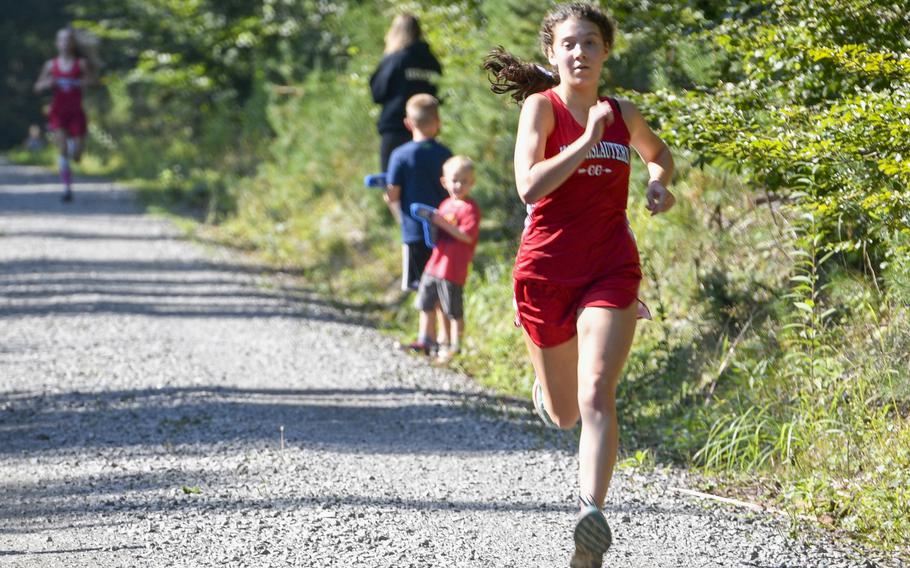 Kaiserslautern’s Piper Parsells races to the finish line at a cross country meet last year, in Kaiserslautern, Germany. She was fourth in Germany in 2020. (J.P. Lawrence/Stars and Stripes)

Gaudy times on flat, relatively easy courses look a lot better on paper than those compiled on hills or in challenging terrain.

That’s particularly true in Europe, where communities sometimes hundreds of miles apart – occasionally separated by mountain chains or large bodies of water – make getting everyone in one place difficult. At least until the season-ending championships come along.

Even that’s been impossible the last two years due to COVID protocols.

But that should change this season. Not only are athletes from the British Isles to the Middle East likely to finally all get a chance to compete for titles again, but runners from almost half the field are set to meet in the season’s second week.

Vilseck is set to host a meet featuring 12 other schools, including large school powers Stuttgart, Ramstein, Kaiserslautern and Wiesbaden on Sept. 10.

Of course, many runners there won’t be in top form. Especially with many of the top programs in Europe gearing their runners to be at their best at the season’s end – this year Oct. 22 in Baumholder. 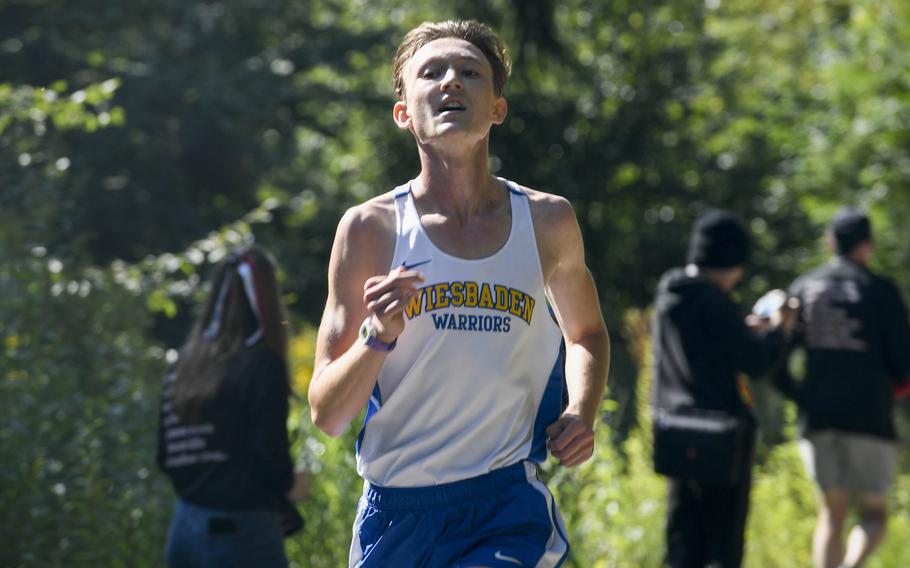 Zach Watts, a runner for Wiesbaden, goes all out during the finish of a cross country meet in September2021, in Kaiserslautern, Germany. (J.P. Lawrence/Stars and Stripes)

A look at runners and teams who should be among those competing at the finals using information supplied by coaches who answered queries from Stars and Stripes:

The Bucs who host the championships aren’t the same squad from a year ago, with the entire girls team that topped Division III a year ago gone. Five runners – all freshmen and sophomores – make up Baumholder’s runners this season.

The Warriors, who compete in only a few sports with DODEA schools, have 22 athletes on their boys and girls teams, about the same as a year ago.

They’ll host a meet Sept. 17 and participate and travel to a few other ones. Fellow international school Black Forest Academy – which competes more robustly in DODEA sports – won both small school titles a year ago.

Seniors Brandon Seyler (19th), Lena Hermann (12) and Katarina Storch (16) finished in the top 20 of the boys and girls races a year ago. They’re joined by seniors John Ramsey and Jacob Porter (boys) and Piper Parsells (girls, 4th in 2020) to form a strong core.

The Raiders had 27 boys and 23 girls out in practices vying for seven spots to compete each week.

The Royals had even more athletes trying to make the traveling teams with 66 runners at a preseason race. Many are back from a year ago.

Those on the girls’ side include Julia Harris (fifth a year ago), Mia Alexander (7th), Isabella Chambers (18th) and Brenna Mack. Jayden Andrews (12th), Max Furqueron (18th) and Preston Jackson lead the boys. Claire Dalling transferred in from Maryland.

Six of 14 runners are back for the Jaguars, who have not competed north of the Alps in two seasons. Those include seniors Kayly Eimicke, Matea Torres, Leila Denton and Aletta Berry on the girls side. They’re joined by newcomer Molly Lefringhouse.

Junior Ella Bishop was the top girls finisher a year ago in Europe. This season, she’ll have to battle to be the top runner on her team. A pair of sisters from Pennsylvania, senior Vanessa Alder and freshman Lily Alder, beat Bishop to the finish line Saturday in the team’s season debut. The Panthers won both the girls and boys events in a field that included Ramstein, Kaiserslautern and BFA.

Senior Carter Lindsey leads the boys. Like Bishop, he also captured the title north of the Alps a year ago. Jackson Coombes is back for his junior season.

Jackson Cochran was fifth in Europe last year and is one of five returning athletes. Another is sophomore Aubrey Tackett, who ran in the girls’ championships. Eleven new runners will see if they can run at season’s end as well.

The Warriors won the girls large-school title a year ago, thanks to depth supplied in part by senior Kendall Kaloostian (10th), sophomore Bryce Watts (11th) and junior Jade Saunders (17th). And freshman Annastasia Berghammer and Baumholder transfer Natalia Bergdorf - sixth in the small schools race as a sophomore – combine for a formidable lineup.