Wiesbaden’s Elijah Smith celebrates his win in the boys 3,200-meter race at the DODEA-Europe track and field championships in Kaiserslautern, Germany. Smith set a new DODEA-Europe record, winning the race in 9 minutes 44.64 seconds, breaking the record of 9:49.21 set in 2019. (Michael Abrams/Stars and Stripes)

KAISERSLAUTERN, Germany – It felt like old times at the Kaiserslautern High School stadium Friday with the return of the DODEA European Track and Field Championships.

Athletes got to experience the thrill of competition against the best in Europe in front of crowds of cheering spectators for the first time in two years.

Few wasted the opportunity. Wiesbaden senior Elijah Smith looked to be running at a miler’s pace when he charged into the lead in the 3,200-meter run with just over four laps to go. He nearly was. Smith set a new European record with a time of 9 minutes, 44.64 seconds, eclipsing the 2019 record set by Ramstein’s Dashiell Rogers by nearly five seconds. Kaiserslautern’s Piper Parsells is on her way to winning the girls 800-meter race in 2 minutes, 25.78 seconds on the first day of the DODEA-Europe track and field championships in Kaiserslautern, Germany. She also won the 1,500-meter race in 5:21.25. (Michael Abrams/Stars and Stripes)

Smith held off a late surge by Stuttgart’s Carter Lindsey, who also dipped two seconds under the record, finishing less than three seconds behind. The two battled it out down the final straightaway, with Smith unwilling to yield another title to Lindsey, the reigning DODEA European cross country champion. In last year’s cross country championships, Smith took an early lead but couldn’t hang on and finished third.

For Parsells, the younger sister of former DODEA-Europe cross country and track and field champion Grant Parsells, the day was her first real European track meet, she said. Last year, the championships were virtual and two years ago, the meet was canceled.

“It felt really good,” she said of competing. 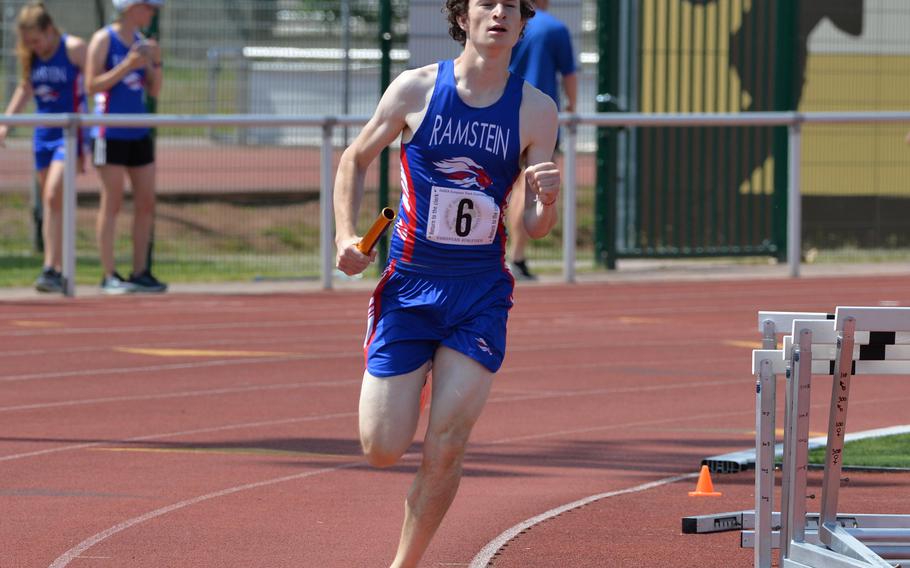 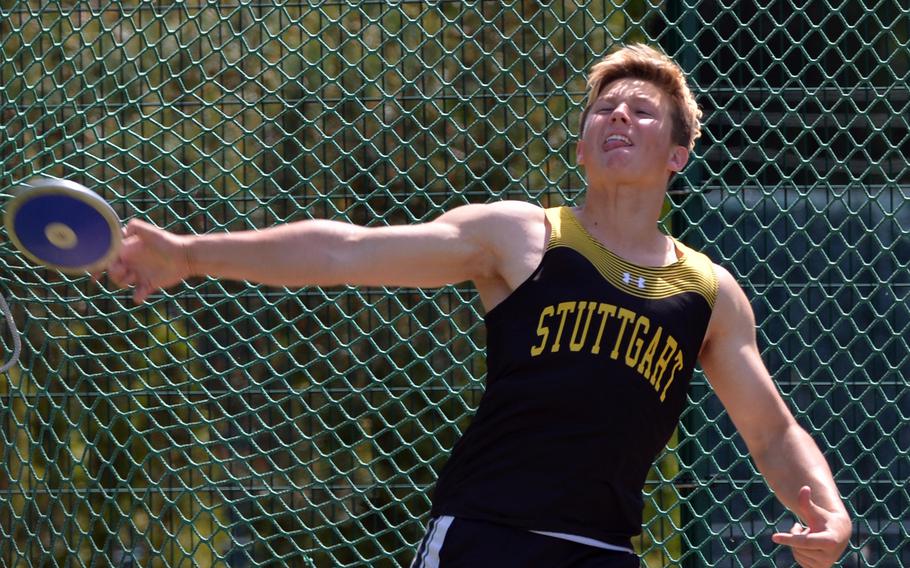 Stuttgart’s Jack Gruver won the boys shot put competition with a throw of 118.01 feet, on the first day of the DODEA-Europe track and field championships in Kaiserslautern, Germany. (Michael Abrams/Stars and Stripes)

Ramstein fell about two seconds short of a Royal school record in the boys’ 3,200 relay. But seniors Jacob Hutton and Gideon Zaugg and juniors Evan Brooks and Max Furqueron were thrilled to have won the relay in 8:17.94, slashing nearly 20 seconds off their seed time and dominating the rest of the field. Runner-up Stuttgart ran 8:35.09, finishing 10 seconds ahead of Aviano.

“We did it last year (for the virtual championship) and we were 100% planning on doing it this year, but I did not think we were going to beat everybody by that much,” said Brooks, who opened up a big lead for Ramstein on the second leg.

In the field events, Ansbach junior Tamia McLaughlin¬¬¬¬ grabbed a pair of wins, taking first in the high jump and the long jump. Her long jump victory was extra sweet, as she leapfrogged all the way back from about eighth place in preliminary jumps to nail the winning distance on her second jump in the finals.

“My first three jumps weren’t my best,” she said. “I came into finals wanting to win.” 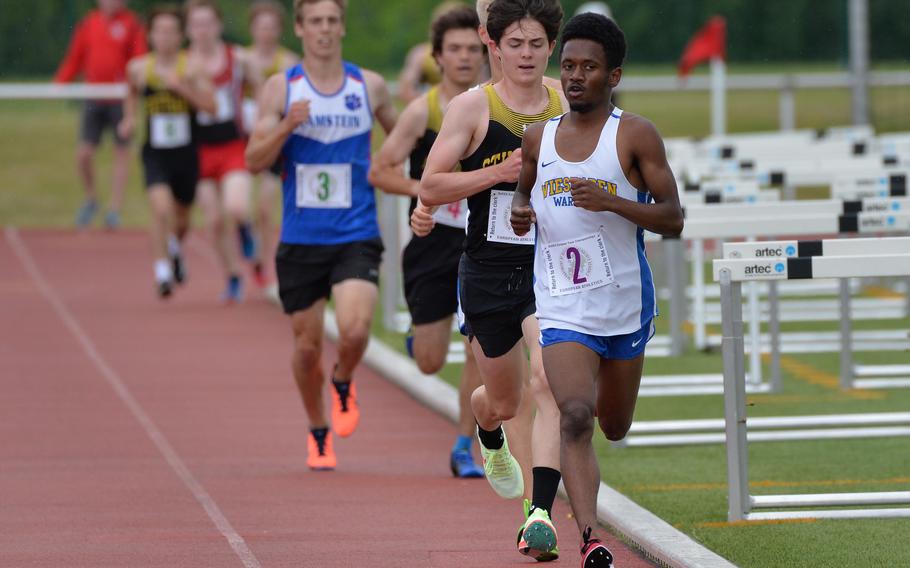 Wiesbaden’s Elijah Smith leads the pack in the boys 3,200-meter race at the DODEA-Europe track and field championships in Kaiserslautern, Germany, ahead of Stuttgart’s Carter Lindsey. Smith won the race in a new DODEA-Europe record of 9 minutes, 44.64 seconds. Lindsey finished second. (Michael Abrams/Stars and Stripes) 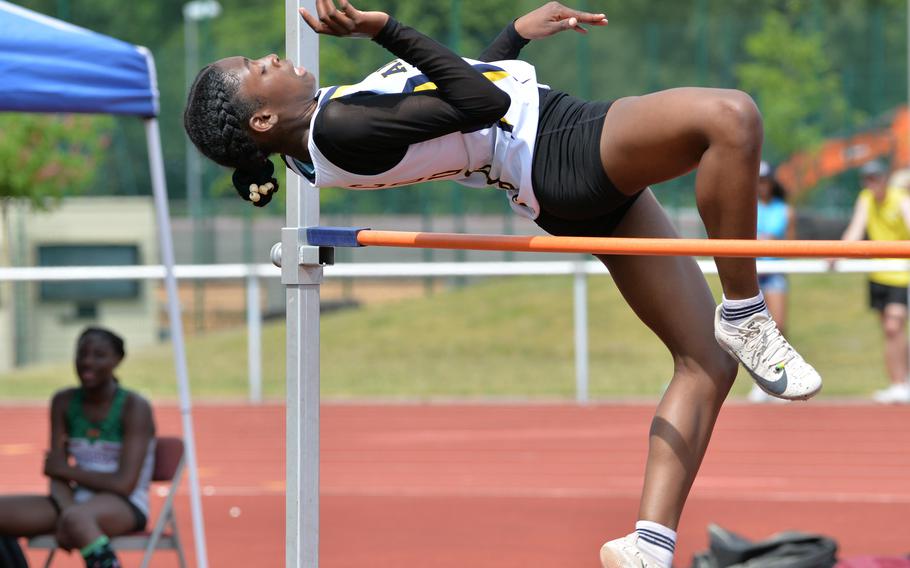 Ansbach’s Tamia McLaughlin clears the bar on her way to nudging AFNORTH’s Victoria Morris for the title in the girls high jump event at the DODEA-Europe track and field championships in Kaiserslautern, Germany. Both cleared 4 feet, 11 inches, but failed to clear the next height. McLaughlin, who also took the long jump title with a leap of 16-02 1/4, won on less attempts during the competition. (Michael Abrams/Stars and Stripes)

Stuttgart’s Jack Gruver also did some leapfrogging, from last year to this year, in the discus throw.

The sophomore finished 18th last year at Europeans in the discus. On Friday, his toss of 118 feet, 1 inch earned him a European title. He wasn’t expecting it, with the likes of top seeds Ramstein’s Daniel Herbin-Hervig and Kaiserslautern’s AJ Evans among the competition.

“I’ve been practicing really hard all year,” Gruver said. “I had a good spin and a good release, which really helped me a lot.”

In the girls’ shot put, there were no such surprises. Top-seed Sage Barnes of Kaiserslautern tossed a personal record of 31 feet, 7.5 inches for the win. She was pleased to hit those marks despite warm temperatures, in which she typically doesn’t throw well, she said, as it can be tough to get a good grip when sweating on the shot put.

“It feels great to be back,” he said, after collecting his medal. “I love the competition. I love all the teams being here and just the environment.”

Competition begins again at 10 a.m. on Saturday, for the last and final day of the championships. Kaiserslautern’s Sage Barnes won the girls shot put event on the first day of the DODEA-Europe track and field championships in Kaiserslautern, Germany, with a toss of 31 feet, 7.5 inches. (Michael Abrams/Stars and Stripes)