Six teams left to battle it out for softball titles 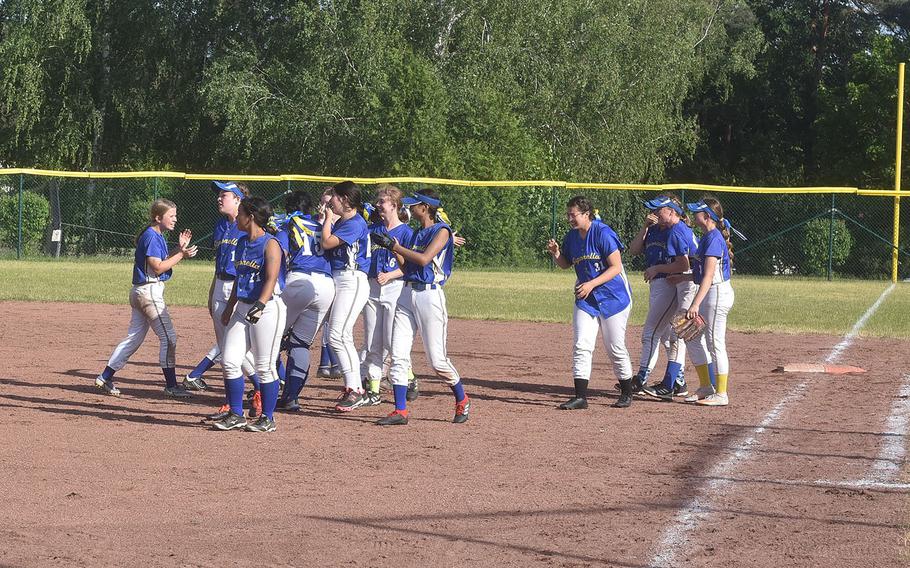 The Sigonella Jaguars celebrate after defeating Rota 8-5 on Friday, May 20, 2022, at Ramstein Air Base to stay alive in the DODEA-Europe Division II/III softball elimination tournament. Sigonella plays Spangdahlem on Saturday morning for the right to take on Naples for the championship. (Kent Harris/Stars and Stripes)

The DODEA-Europe Division I and Division II/III softball championships are Vilseck’s and Naples’ to lose.

The Falcons and Wildcats have to be beaten twice Saturday in the double-elimination format after finishing Friday’s play with perfect records. If their challengers beat them in the championship games, a second championship game would be held.

Sigonella and Spangdahlem square off for the right to face Naples in the small school finals, while Ramstein and Wiesbaden meet for a finals berth against Vilseck. In a change to the schedule, all Saturday’s games will be held in Kaiserslautern on the field near the high school.

Naples defeated Spangdahlem 15-4 for its third victory of the tournament to earn the right to be in the championship. Vilseck’s 9-5 win over Wiesbaden did the same for the Falcons.