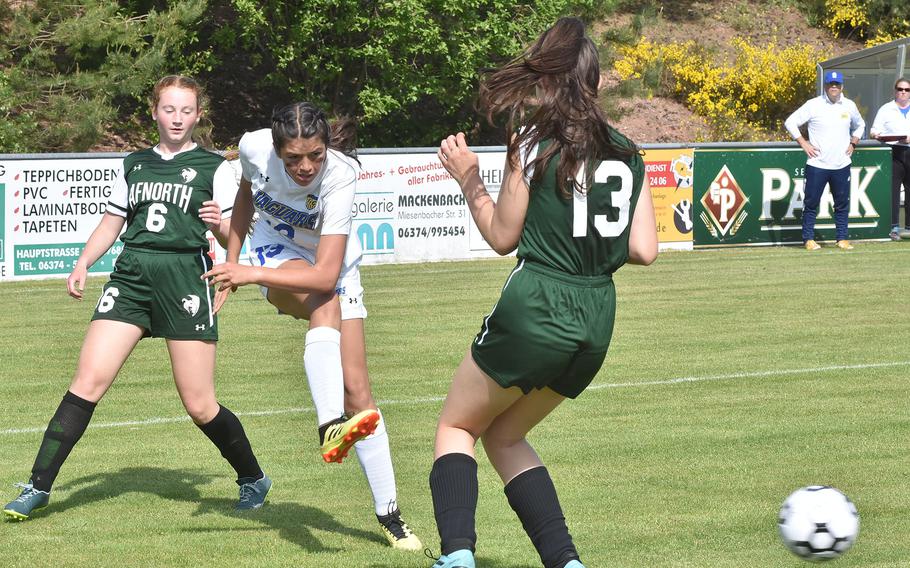 Of the six DODEA-Europe soccer tournaments held this week in the greater Kaiserslautern Military Community, the Division III girls is the most unique.

Only four teams are vying for the championship after four of the eight schools in the division failed to field girls teams and went with co-ed entries in the boys competition instead. So those still left in the girls tourney will play each other at least twice – meaning the stakes weren’t quite as high Monday.

“It’s not something I’ve ever experienced,” AFNORTH coach Christy Wise said of the nature of the tournament.

The Lions fell to 3-2 to Sigonella in their opener but bounced back to down Alconbury 3-0.

Not that AFNORTH appeared overmatched against the Jaguars. The Lions actually scored first on Isabella Guest’s shot. After Isabelle Baileza and Leila Denton put the Jaguars on top 2-1, Selah Skariah tied it before halftime.

Ryleigh Denton was the only one to score in the second half, giving the Jaguars the win.

“We’re going to take it one game at a time,” he said. That held true after the team’s second victory, a 3-2 decision over Spangdahlem.

Dragons coach Sharen Lee said her team’s not ready to concede spots in the finals to the Jaguars and Lions.

Evidence was a 2-0 victory over the Sentinels to start the tournament. Spangdahlem defeated Alconbury 8-4 earlier in the year. 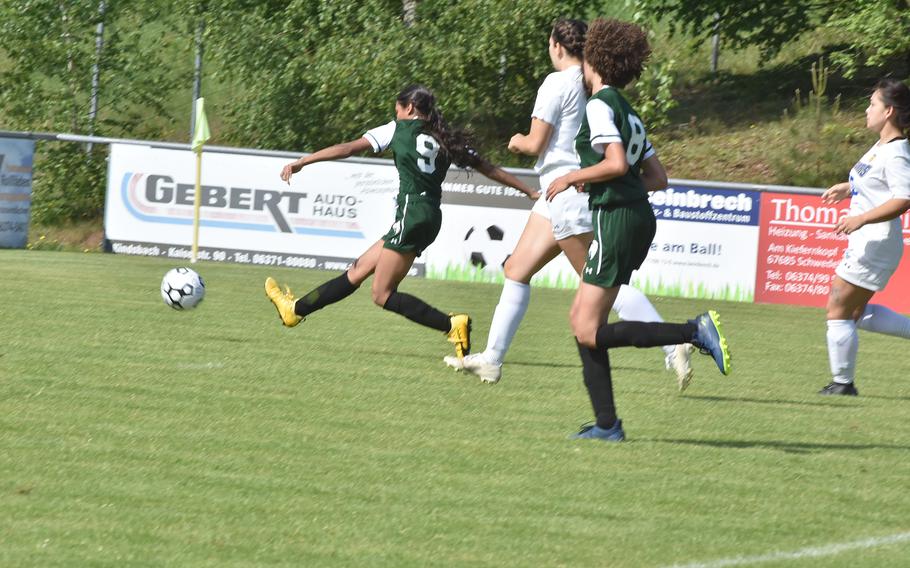 AFNORTH's Selah Skariah ties the game with Sigonella at 2-2 on Monday, May 16, 2022, in the DODEA-Europe girls Division III soccer championships at Reichenbach, Germany. (Kent Harris/Stars and Stripes) 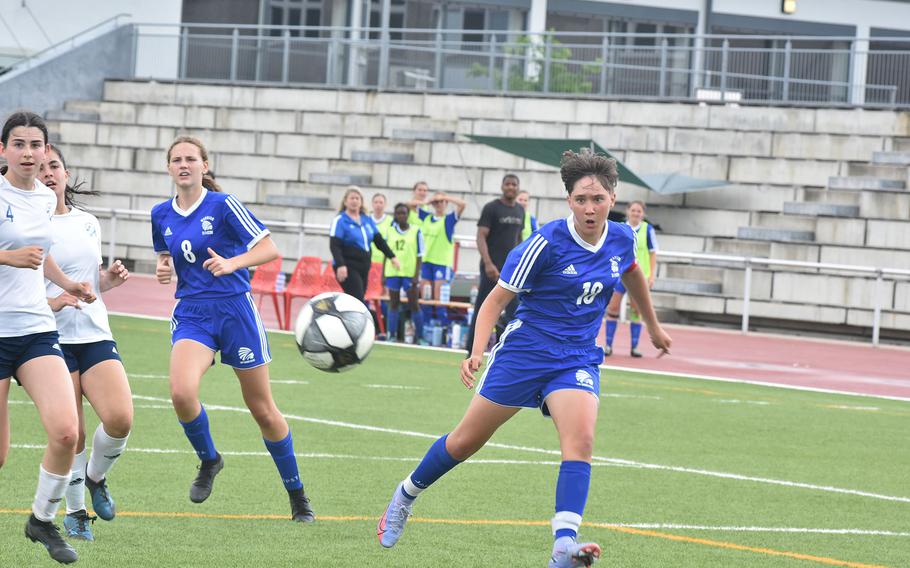 Wiesbaden's McKinley Viers watches as her attempt at a goal in the DODEA-Europe girls Division I soccer championships on Monday, May 16, 2022, at Vogelweh, Germany. (Kent Harris/Stars and Stripes) Black Forest Academy's Yewon Park tries to control the ball Monday, May 16, 2022, before making a run on goal in the girls Division I soccer championships in Vogelweh, Germany. (Kent Harris/Stars and Stripes)

The biggest surprise in the opening day of the large-school tournament at Vogelweh was the effort by Kaiserslautern, which tied No. 1 Stuttgart 2-2 in perhaps the best performance of any Raiders team this spring.

Fifth-seeded Kaiserslautern didn’t fare as well in its second game, though, falling to Lakenheath 4-0. The Lancers then beat SHAPE (4-0), putting them in good shape to make the semifinals. The Panthers also reversed course, routing SHAPE (7-0). Haley Wells had four goals, Kendall Boudreaux two and Bella Henderson a goal and three assists.

No. 2 Wiesbaden rolled past Vilseck (7-0) before a 2-0 victory against Black Forest Academy. The Warriors led 1-0 in the first half as Meghan McConville outraced the field to score on a breakaway goal after a nice pass ahead by McKinley Viers. McConville’s header in the second half gave the Warriors breathing room after a free kick from Viers bounced around the goal.

The win, combined with Ramstein’s 7-0 victory over Vilseck, clinched spots in the semifinals for the Warriors and Royals - who meet Tuesday in a pool play match.

Wiesbaden coach Nicole Angel said her team isn’t looking ahead to potential semifinal matchups and will be ready to play the No. 3 Royals.

“We just concentrate on ourselves,” said Angel, whose team won the tournament the last year it was held in 2019 before the onset of the coronavirus pandemic. Senior Hope Goodwin is the only player left from that team. Ramstein's Eleftheria Randitsas ties up Vilseck's Megan VanGilder during a steady rain Monday, May 16, 2022, at the DODEA-Europe girls Division I soccer championshps at Vogelweh, Germany. (Kent Harris/Stars and Stripes) At Landstuhl, the middle school tournament was probably the most chaotic of the day, with Vicenza emerging as the only unbeaten squad.

The Cougars downed American Overseas School of Rome (1-0) and Bahrain (4-0).

Aviano, AOSR, Naples and Bahrain are all tied at 1-1 in the round-robin field with Rota trailing at 0-2.

Action continues at all three tournaments on Tuesday, with semifinals set for Wednesday in the Division I tournament before all six girls and boys tournaments conclude with final games Thursday at Vogelweh.