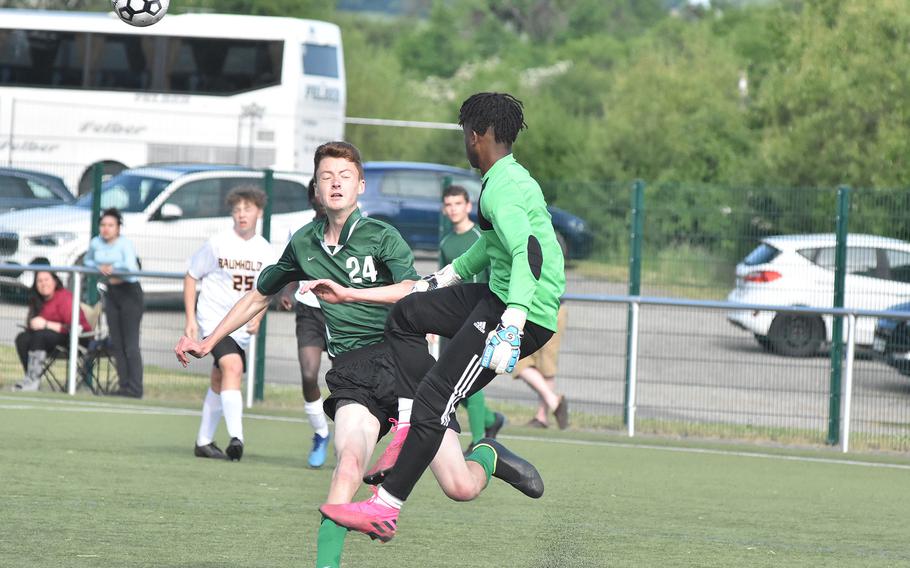 Baumholder goalkeeper Jonathan Kimuli gets to a ball quicker than Alconbury's Gethin Moose during a boys Division III matchup on Monday, May 16 20022 at the DODEA-Europe soccer championships in Reichenbach, Germany. (Kent Harris/Stars and Stripes)

It’s a good feeling to win the first game of a season-ending tournament in convincing fashion. It’s even better to win the second one – in any way.

Unfortunately, that wasn’t the case Monday for the Baumholder Bucs and Hohenfels Tigers, who went from 1-0 during the morning session of Day 1 in the DODEA-Europe Division III boys championships to 0-1 in the afternoon set.

Behind seven goals from William Cecil, the Tigers cruised past Spangdahlem 8-2 in the second game of the day at Reichenbach, Germany, following a 6-0 victory by Baumholder over Alconbury in the opener.

But Hohenfels ran into a surprisingly strong Brussels team in the late game of the day and fell 5-0. Baumholder lost 4-2 to AFNORTH in the Bucs’ second game of the day.

The three teams who didn’t suffer a loss Monday were the Lions, Brigands and Sigonella. Brussels, seeded seventh of the eight teams entered, stunned No. 2 Ansbach 3-1 before topping the Bucs.

When asked before his first game on what his team’s chances were, Brussels coach Bill Scofield said “the first game might tell us if we belong in this tournament.”

Scofield smiled after his team’s win and said that question was answered “emphatically.”

After giving up an early goal to Ansbach senior Shane Nesbitt, the Bucs concentrated on keeping the ball away from him.

“We did that pretty effectively, except for a few touches,” Scofield said. 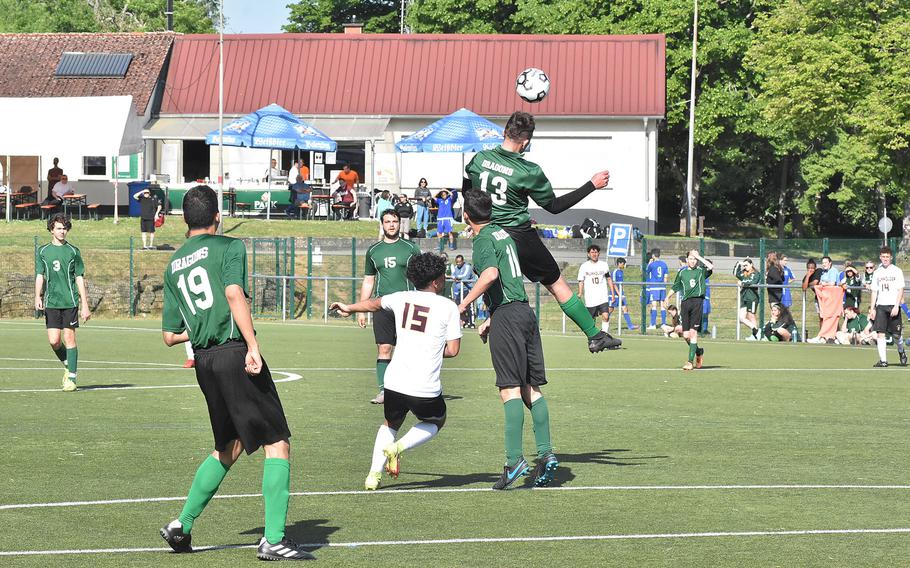 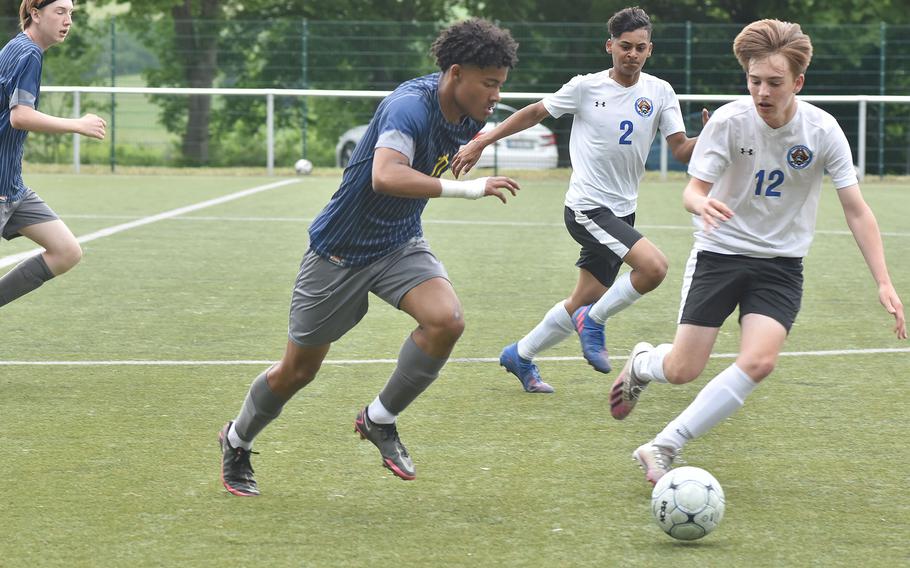 Ansbach bounced back in its second game by shutting out Spangdahlem 7-0.

Sigonella and AFNORTH battled to a 1-1 tie after the Lions survived an early blitz by the Jaguars that saw Gabriell Nasseli find the net and senior Jeremy Reardon fail to do so despite four headers that had chances to go in. One hit the crossbar.

AFNORTH’s goal came after a player was taken down near the goal, resulting in a penalty kick that David Immel converted.

Hohenfels got not only a stellar performance from Cecil in its first game, but also from senior Samuel Bahng, who set up four scores and controlled the midfield.

Coach Janet Rogers calls Bahng a coach on the field and she’s not just using a cliché. Bahng, headed to West Point in the fall, has a license to coach.

“I thought it would give me a different perspective,” he said. 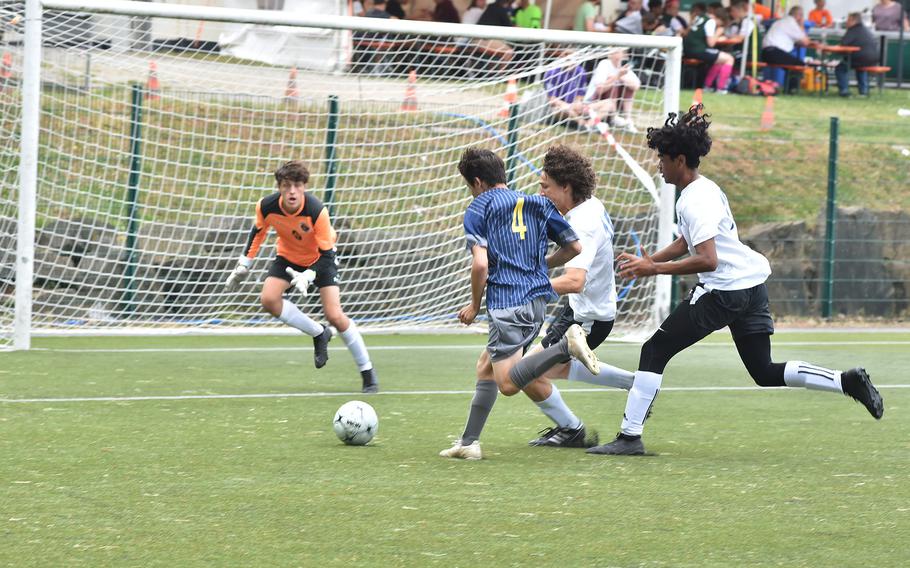 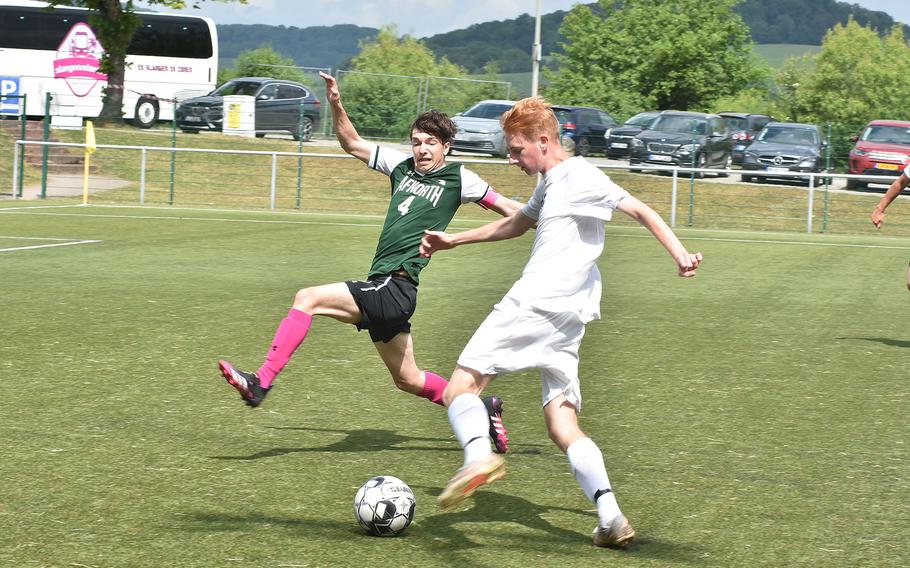 AFNORTH's David Immel tries to get in the way of a shot from Sigonella's Cameron Evans on Monday, May 16, 2022, at the DODEA-Europe boys Division III soccer championships at Reichenbach, Germany. (Kent Harris/Stars and Stripes)

One of four schools fielding co-ed teams in the tournament, Baumholder got its first goal from Kaleena Sais.

Sais, who credited a teammate for setting her up, played for the girls team in past years.

“It’s really not much different,” she said. “It’s a bit more intense, but it’s fun.” 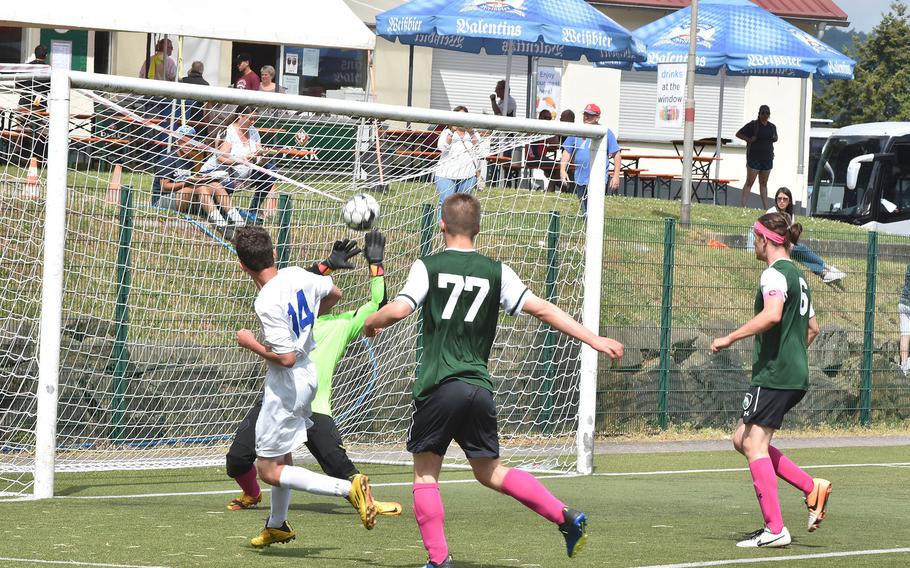 Sigonella's Gabriell Naselli scores for the Jaguars against AFNORTH on Monday, May 16, 2022, in the DODEA-Europe boys Division III soccer championships at Reichenbach, Germany. (Kent Harris/Stars and Stripes) 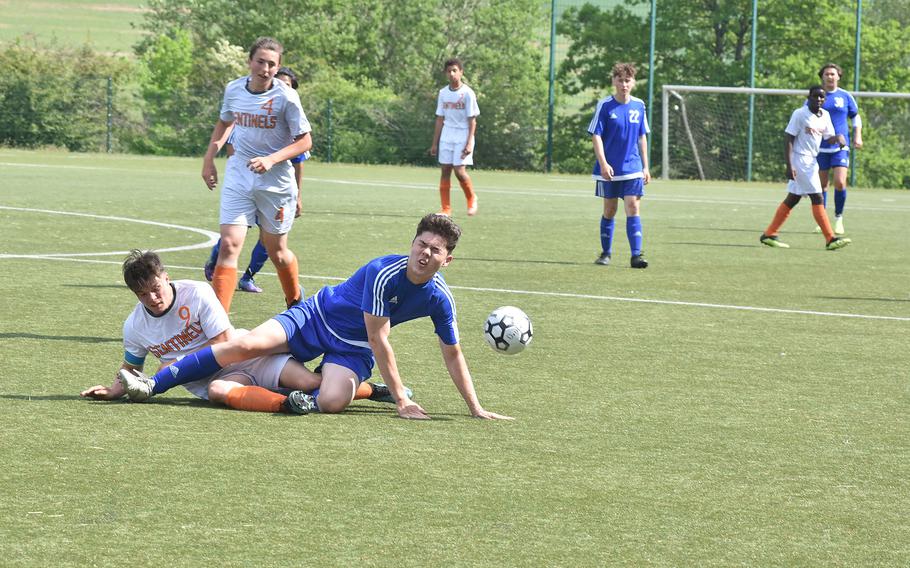 Several miles away at Landstuhl, the big winners on the opening day of the tournament for mid-sized schools were American Overseas School of Rome, Bahrain and Naples. Each went 2-0.

Vicenza, which went 1-1, was the only other team to emerge with a victory.

At Ramstein, top-seeded Stuttgart and No. 3 Wiesbaden went 2-0 and the host Royals won one match and tied another.

Kaiserslautern and BFA remain in the hunt by splitting their opening games.

The score of the Naples vs. Rota game has been corrected. It was 7-0.