Wildcats know-how too much for Saints 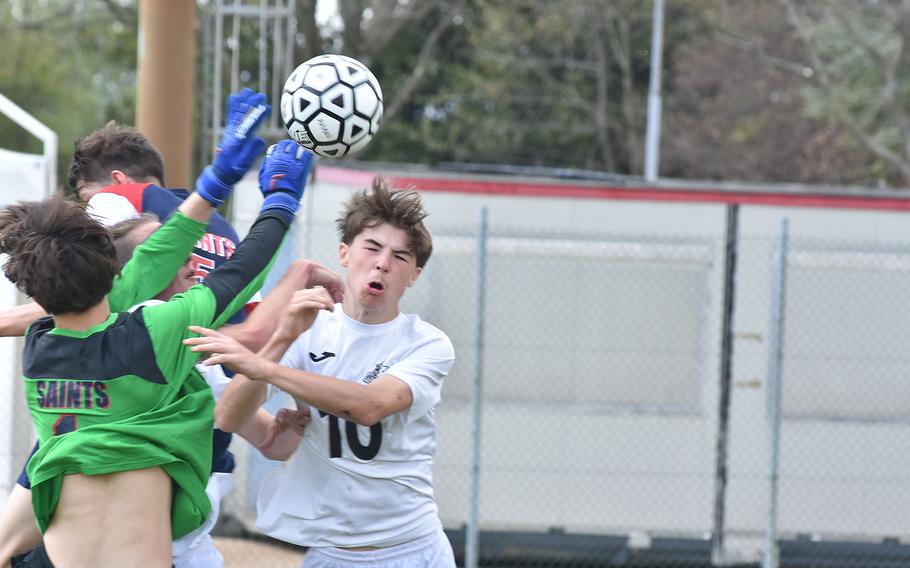 Naples’ Connor Wallace, Aviano goalkeeper Charles Udall and several other players collide in front of the Aviano goal in the Wildcats’ 3-2 victory over the Saints on Saturday, April 16, 2022 in Aviano, Italy. (Kent Harris/Stars and Stripes)

AVIANO, Italy – Experience plays a factor in just about any human endeavor.

But just how much it can matter was in evidence Saturday in a pair of DODEA-Europe soccer games between the Naples Wildcats and the host Aviano Saints.

Thanks mainly to two spring seasons canceled by the coronavirus pandemic, the Wildcat girls only had three players who had played in a high school game before last weekend. Two of them – juniors Emma Kasparek and Nadia Shimasaki – accounted for most of the Naples offense in a 5-3 victory.

The Naples boys won the 2019 Division I title but hadn’t played again until earlier this month. Only one player returns from that team. But the Wildcats do have sophomore Connor Wallace, who grew up playing the sport in Scotland and had all three goals in a 3-2 win over the Saints. 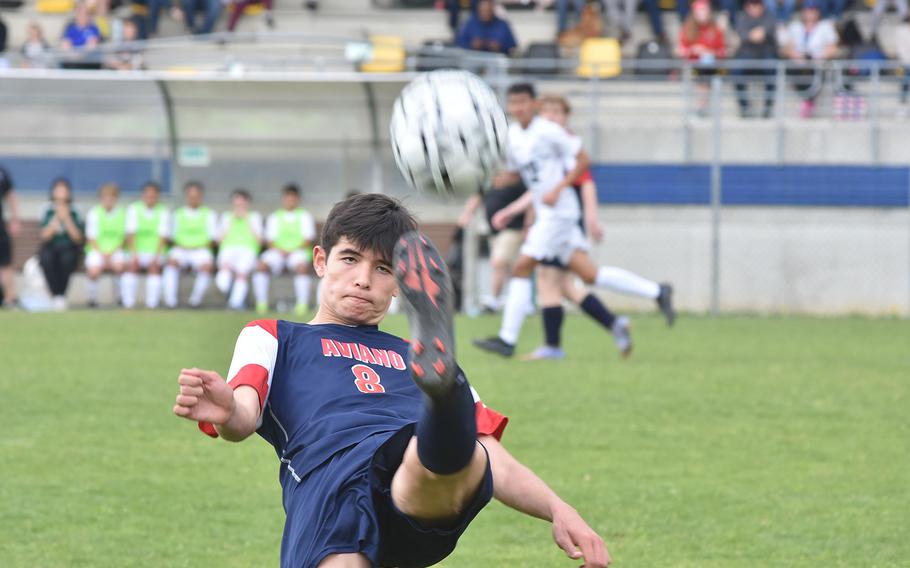 Aviano's Xavier Fox, who scored his team's first goal, kicks the ball back over his head toward the Naples goal in the Saints' 3-2 loss to the Wildcats on Saturday, April 16, 2022 in Aviano, Italy. (Kent Harris/Stars and Stripes) 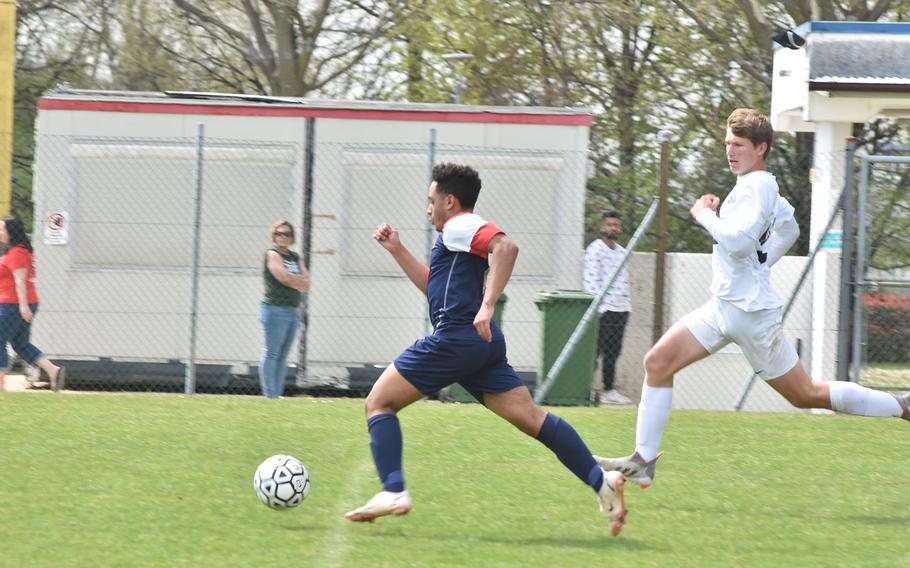 Aviano's Nick Gilbert outraces the rest of the field - including Naples' Andrew Howell - before scoring a goal in the Saints' 3-2 loss to the Wildcats on Saturday, April 16, 2022 in Aviano, Italy. (Kent Harris/Stars and Stripes) 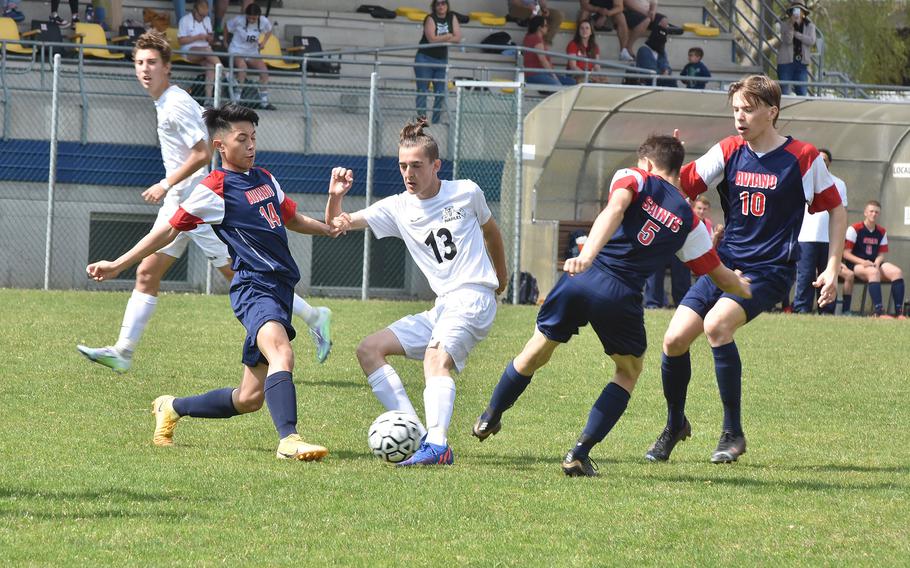 Aviano’s Keoni Andres, left, and Josh Barthold try to take the ball away from Naples’ Izen Hataburda in the Wildcats’ 3-2 victory over the Saints on Saturday, April 16, 2022 in Aviano, Italy. (Kent Harris/Stars and Stripes)

Wallace was in the right place – or wrong place, if you were an Aviano fan – all afternoon.

That includes three times on the sequence of events that decided the game. With the score tied at 2-2, he was fouled close enough to the goal to get a penalty kick. That kick was deflected by Aviano keeper Charles Udall, but Wallace chased the ball down and booted in the winner.

It was only slightly different than his goal to tie the contest in the first half when Udall tried to catch a kick, only to see the ball drop right at Wallace’s feet in front of the goal.

“He’s always in the right spot,” Naples coach Dirk Lambertson said. “We were very fortunate that he transferred here.”

Wallace’s middle goal tied the contest and resulted from Aviano failing to clear the ball in front of its net. Several players touched it before it bounced to Wallace, who had a clear shot at goal. Udall, who made a stellar save in the first half to keep the teams tied at 1-1, never had a chance.

Aviano had struck first as Nick Gilbert’s assist set up Xavier Fox for an unchallenged run at goal. Gilbert then gave the Saints a 2-1 lead early in the second half by outracing the Naples defense down the field after a booming free kick from Aviano defender Terrence Johnson went over all their heads.

Gilbert is the only player on the Aviano roster from the 2019 season.

“We look for improvement every week and we certainly improved from last week,” Aviano coach Ian Birch said. “Hopefully, we’ll keep on improving.” Naples' Emma Kasparek, who scored three of her team's goals, crosses up Aviano's Audrey Belden-Cruz during the Wildcats' 5-3 win over the Saints on Saturday, Apriil 16, 2022, in Aviano, Italy. (Kent Harris/Stars and Stripes) 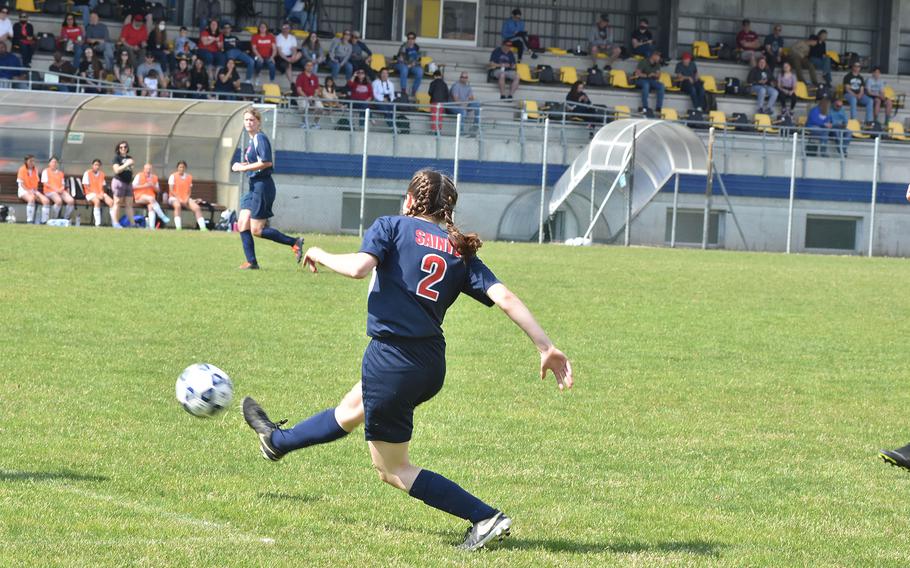 Aviano's Aila Kimball kicks the ball up the field in the Saints' 5-3 loss to the Naples Wildcats on Saturday, April 16, 2022, in Aviano, Italy. (Kent Harris/Stars and Stripes)

A lot of work in practice paid off for the Wildcats, according to Kasparek and coach Alyson Parenteau. Naples got to the ball quicker than Aviano for most of the game and dominated the second half with 18 of its 25 shots on goal coming after halftime.

“They don’t always like that I run them at practice, but …,” Parenteau said.

“They work hard,” Kasparek said of her unexperienced teammates. “They’ve improved so much since we started.”

Still, no other Wildcats other than Kasparek and Shimaski had a serious shot on goal until the final minutes. Kasparek’s first goal came after a toss in from Amber Ozturkoglu. She dribbled past a few Aviano defenders and then fired on goal. Aviano went on to tie the game, but Kasparek put her team up again just seconds later as Aviano’s keeper came out to get the ball but couldn’t corral it – leaving an open net.

Aviano tied the game in the opening seconds of the second half before Shimasaki – who’s ball skills fueled several Naples attacks – struck with her first goal. The Saints then tied it again when Kylee Carroll scored for the second time after Naples keeper Gabriella Barnard stopped one shot, but couldn’t control the rebound.

“More things to work on in practice,” Aviano coach Robert Tiffany said. “They did a good job spreading out our defense and then attacking. We’ll get better.” Aviano’s Kylee Carroll, who scored two goals, stops the ball in the Saints’ 5-3 loss to the Naples Wildcats on Saturday, April 16, 2022 in Aviano, Italy. (Kent Harris/Stars and Stripes) 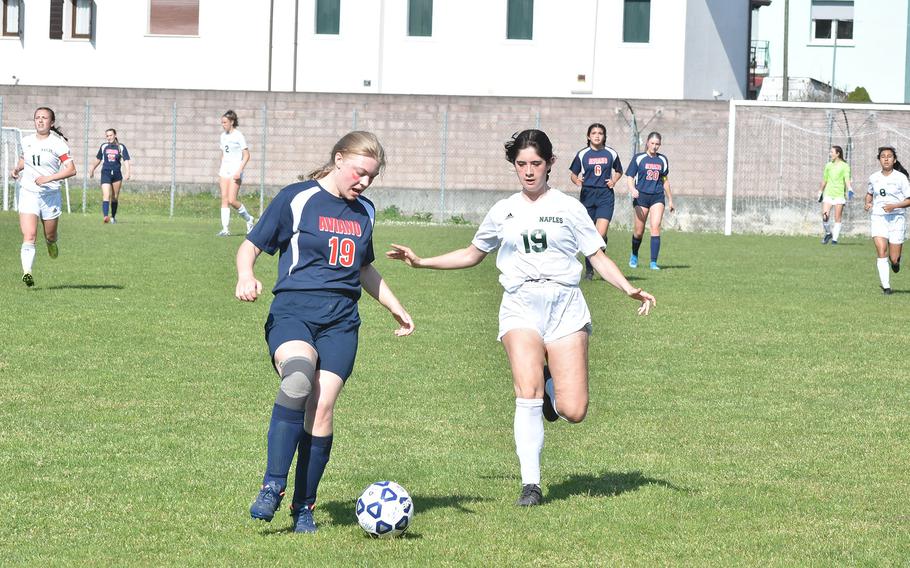 Aviano's Audrey Belden-Cruz beats Naples' Amber Ozturkoglu to the ball Saturday, April 16, 2022, during the Wildcats' 5-3 victory over the Saints in Aviano, Italy. (Kent Harris/Stars and Stripes)