Athletes look to get back on track against real competition 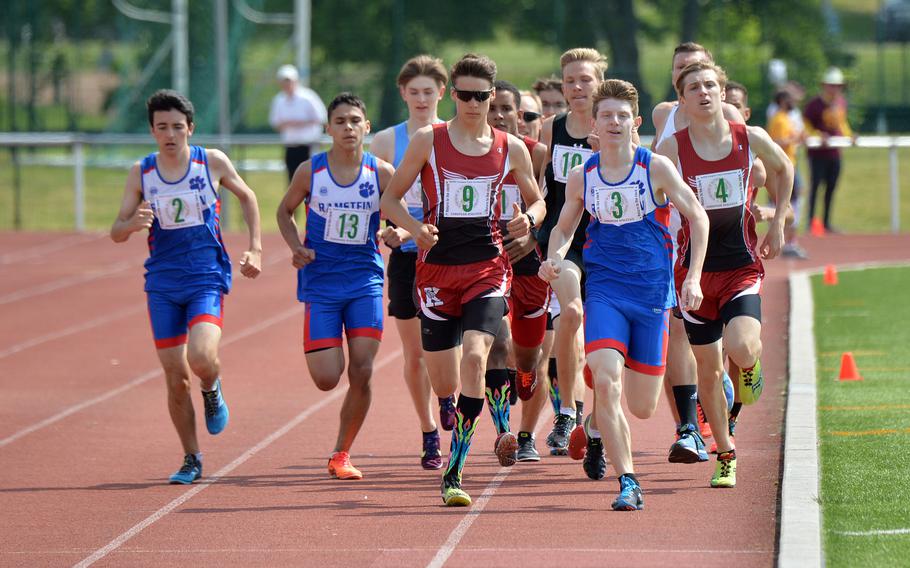 Runners round the track during the boys 1600-meter event at the 2019 DODEA Europe track and field finals. After a canceled 2020 season and a virtual championship last year, athletes are hoping for a traditional ending to the season that starts this weekend. (Michael Abams/Stars and Stripes)

It’s the most memorable line from a cult movie, “The Warriors,” produced long before Makiah Parker and Ava Stout were even born.

But the two Wiesbaden standouts will be able to follow that advice beginning Saturday as DODEA Europe returns to the track fully for the first time in more than two years. Fortunately, the competition the two Warriors face won’t suffer the same fate as the movie villain who quickly regretted those words.

Now a year later, the two are hoping to help Wiesbaden repeat as girls champion.

“Although we appreciate the fact that we were afforded the opportunities to ‘compete’ last year it just isn’t the same virtually,” coach Jessica Jacobs said. “There’s something about facing another school, an opposing competitor that brings out something in your athletes that you just cannot replicate in a virtual format.”

Stout, in particular, won impressively week after week in the hurdles events held last year as each school had meets on home tracks and then compared results to other schools. That was a definite step up from the previous year when no competitions were held due to the coronavirus pandemic.

And there might be more Warriors standouts making their debuts this season.

“Although we lost some seniors or athletes due to PCS season, we are blessed with some fresh talent and incoming underclassmen,” Jacobs said. “These athletes are ready to make their mark and have an impact on our success moving forward.”

Kaiserslautern won the boys contest a year ago and finished second in the girls competition. And with dozens of individual and team events up for grabs at the finals May 20-21 in Kaiserslautern, athletes from many schools are likely to stand at the top of the podium.

A look at what coaches responding to a query from Stars and Stripes say their teams will look like in April and May:

Paulo Aponte (800), Marques Williams (long jump) and Tori Morris (high jump) have the most experience for AFNORTH, according to coach Mark Jackson.

The Lions have 30 athletes out, including two newcomers to watch, sophomore Spencer Johnson and freshman Richele Reyes.

“The kids are so excited to compete again in person,” Jackson said.

Coach Carie Sundberg moved from an assistant in Brussels to head coach at Rota. She has 19 athletes out for the team and just one who placed at the virtual meet: her senior daughter, Daphne (third in 100 and 300 hurdles, sixth in triple jump and seventh in long jump).

Black Forest had only one athlete compete in the virtual finals. Senior Colby Liesen (400, 800, long jump, triple jump) earned a second-place finish for the school in boys Division II.

This year, the school has 49 athletes out to compete at the D-I level – roughly a quarter of the school’s enrollment.

The Dragons currently field a squad of 15 athletes – three of them middle schoolers.