It’s Wiesbaden vs. Stuttgart and Ramstein vs. Kaiserslautern Kaiserslautern sophomore Keenan Garner scored 19 points in the fourth quarter on Friday, Feb. 22, 2022 against Vilseck at the DODEA-Europe Division I basketball championships at Ramstein Air Base. The most emphatic came on this dunk. (Kent Harris/Stars and Stripes)

RAMSTEIN AIR BASE, Germany – The Vilseck Falcons managed to slow down Ramstein point center Keenan Garner for three quarters Friday with a variety of defenses.

But the 6-foot-3 sophomore from New York appeared unguardable in the final period, scoring 19 of his 25 points as the Raiders topped the Falcons 63-49 and advanced to the finals of the DODEA-Europe Division I boys basketball tournament. Kaiserslautern will meet Ramstein – a rematch of a Raiders victory Wednesday in round-robin play – on Saturday for the title. That game comes after Stuttgart and Wiesbaden play the second time in two days in the girls final, this time with a title at stake.

Garner declined to take much credit for the victory, despite scoring all but five of his team’s points in the final quarter. That included a perfect seven-of-seven from the free throw line. His dunk put the Raiders up 46-40 and Vilseck never got closer than two baskets after that.

“My teammates started hitting shots and it opened up the court more for me,” said Garner, who was the frequent target of a box-in-one defense where four defenders play a zone and the other follows a player all around the court. The Falcons also played a more traditional zone and man-to-man. Ramstein’s Katya von Eicken gets a shot off despite the efforts of Wiesbaden’s Ella Kirk in the Royals’ win over the Warriors on Friday, Feb. 25, 2022, at the DODEA-Europe Division I basketball championships. (Kent Harris/Stars and Stripes)

The game pitted Garner’s inside prowess against Vilseck’s guard-oriented attack. The Raiders zoomed off to leads in each of the first three quarters, but the Falcons came back each time. They took their last lead at 40-39 before the Raiders scored seven straight, capped by Garner’s dunk.

Garner wasn’t about to make any bold predictions for his team’s rematch with their crosstown rivals.

“We’ll come out strong as a team and do the best we can,” he said.

While the Raiders and Falcons closed the action Friday, the Royals and Wiesbaden Warriors opened it in a game that was just as decisive in setting Saturday’s finals.

Ramstein scored the first eight points and led 25-18 at the half. But Wiesbaden rallied in the second half and took the lead with less than 20 seconds to play. Ezra Woodfork then grabbed an offensive rebound for the Royals with 4 seconds left and put the ball through the hoop, giving Ramstein a 42-41 victory.

That meant the Royals needed only to beat SHAPE, which hadn’t won a game in the tournament, to advance. It was close, but Ramstein prevailed 28-22. Wiesbaden and Vilseck will play for third Saturday. 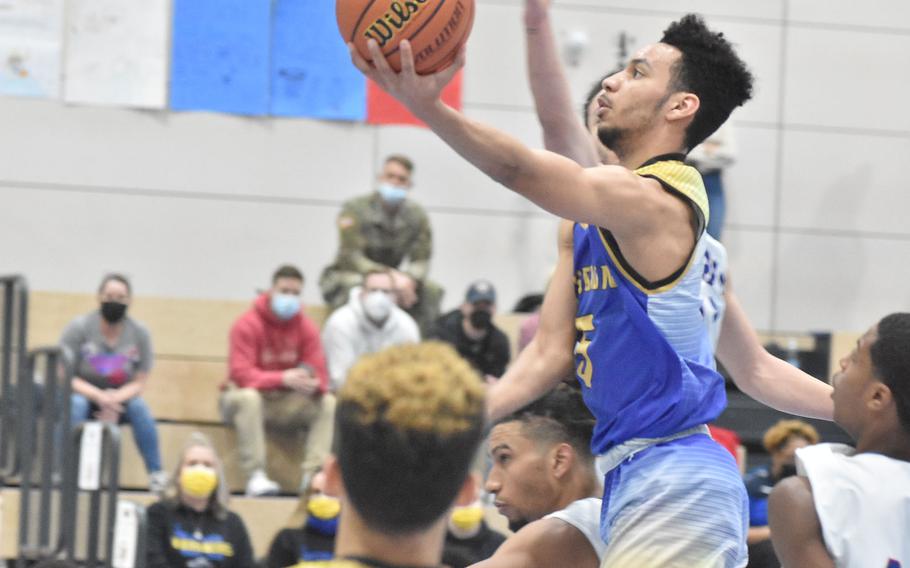 Wiesbaden's Kaleb McKenzie sails toward the basket against Stuttgart on Friday, Feb. 25, 2022, at the DODEA-Europe Division I basketball championships. (Kent Harris/Stars and Stripes)

Ramstein handed Wiesbaden its first loss of the season to open the day on the girls side. The Royals broke open a close game when Warriors star Alynna Palacios hurt her knee. Palacios, who scored 25 points, returned to the game with her team down double digits and couldn’t stop Ramstein from emerging with a 42-34 win.

A 50-31 Ramstein victory over SHAPE then meant that Wiesbaden had to defeat Stuttgart – perfect in the tournament – in a mid-afternoon game to grab a spot in the finals. A Warriors loss would have propelled the Royals into the title game against the Panthers.

But Wiesbaden downed Stuttgart 36-30, leaving both teams with 5-1 records through round-robin play, a game ahead of Ramstein and Lakenheath – who play for third.

Stuttgart didn’t have to win the game to advance, but coach Robin Hess would have preferred that scenario. Lakenheath's Gabriel Stephenson goes up for a shot against SHAPE on Friday, Feb. 24, 2022, at the DODEA-Europe Division I basketball championships. (Kent Harris/Stars and Stripes)