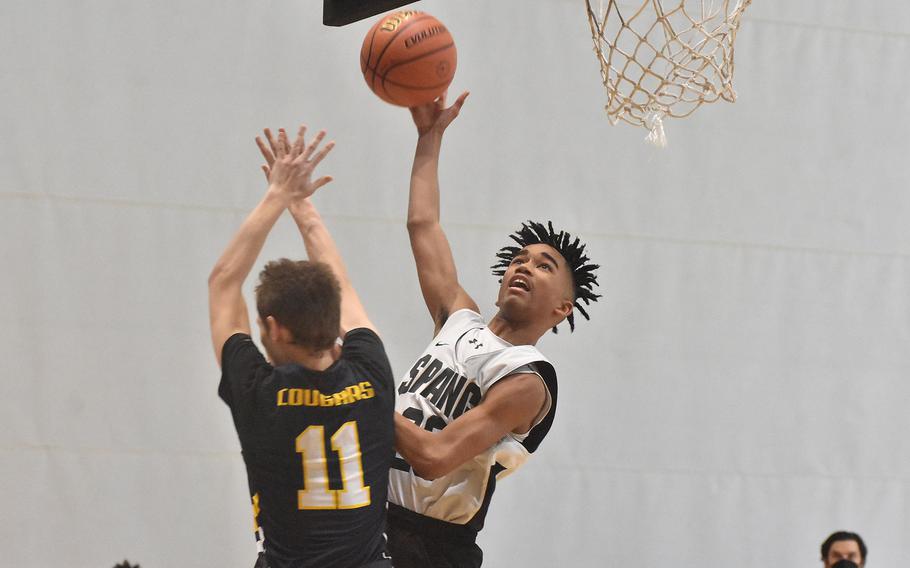 Spangdahlem's Robert Leggett lays it on over Ansbach's Brody Hoctor on Wednesday, Feb. 23, 2022, at the DODEA-Europe Division III basketball tournament at Ramstein Air Base, Germany. (Kent Harris/Stars and Stripes)

RAMSTEIN AIR BASE, Germany – Alconbury boys’ basketball coach Ronald Behr is in a bit of a different situation than most of his colleagues at the DODEA-Europe basketball championships.

His Dragons hadn’t played a single game against any other Division III team at the tournament before Wednesday. In fact, other than a few games against Division I Lakenheath – the only other DODEA school in England – Alconbury hadn’t played any other American teams in a coronavirus-shortened season.

Still, after seeing his squad attain its first official victory of the year in a 50-28 win over Brussels, Behr didn’t want to admit to any scouting while watching another pair of teams play.

“I just enjoy watching basketball,” he said, smiling through his mandated mask. “That’s the fun part. Being able to see other teams. No matter what way the games turn out, we’re excited to be here.” 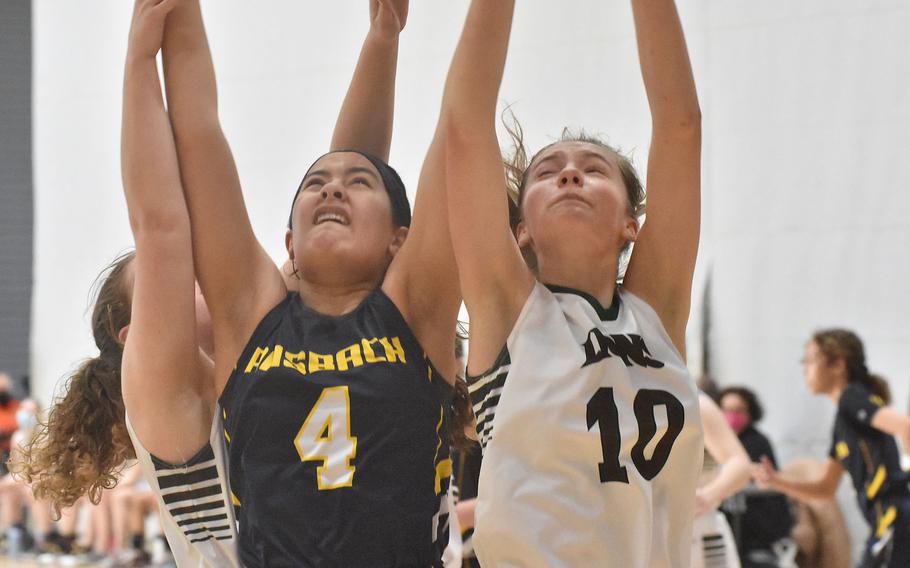 Ansbach's Tessa Stanley, left, and AFNORTH's Coral Moberg stretch as high as they possible can for a rebound in the Lions' 38-17 victory Wednesday, Feb. 23, 2022, at the opening day of the DODEA-Europe Division III basketball championships. (Kent Harris/Stars and Stripes)

In that way, Behr was very much like the other coaches at Ramstein’s South Side Fitness Center. Thirteen teams representing seven of DODEA-Europe’s smallest schools started three days of round-robin competition. The top two teams from each the boys and girls tournaments will play for the title Saturday.

The Dragons saw one of the likely championship contenders in their second game. The Baumholder Buccaneers put on a full-court press that had the Dragons repeatedly turning the ball over for easy Baumholder baskets. Just getting the ball past half court was a victory of sorts in a lopsided 58-19 defeat.

Behr was far from surprised, though.

“They’re on a different level,” he said before the contest with the Bucs.

Baumholder, the prohibit favorite for the small-school boys, blitzed Brussels in its second game, 45-5. 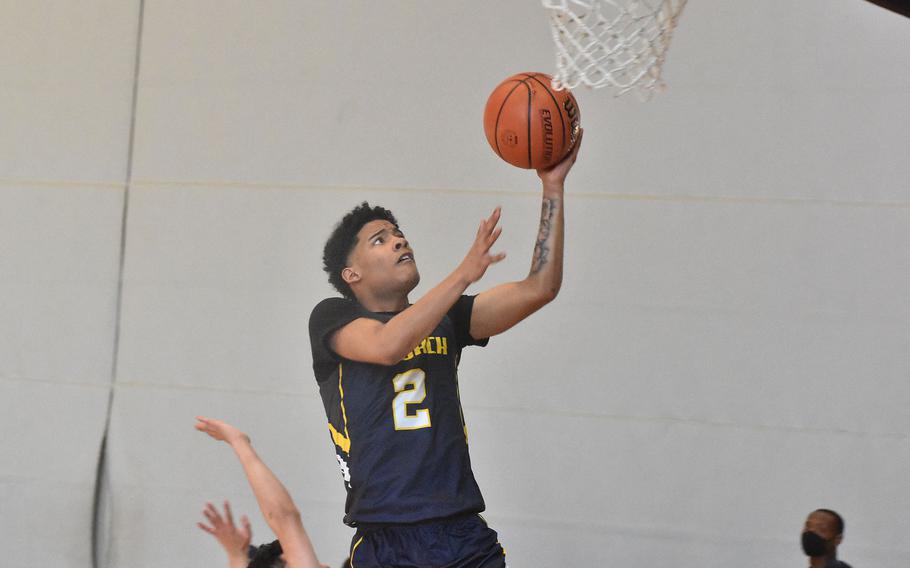 Ansbach's Shane Nesbitt goes up for a layup Wednesday, Feb. 23, 2022, in a 66-32 victory over AFNORTH on the opening day of the DODEA-Europe Division III basketball championships. (Kent Harris/Stars and Stripes) Ansbach was impressive as well, winning both of its contests – 66-32 over AFNORTH and 56-28 over Spangdahlem. The Cougars and Buccaneers play at 11:30 a.m. Thursday in what could be a preview of the championship game.

In girls play, AFNORTH is just as much a favorite as Baumholder in boys.

Ansbach is among those expected to battle the Lions in the finals. But the Cougars were no match for AFNORTH in the first game of the day. The Lions roared out to a 20-0 lead early into the second quarter and were never threatened in a 38-17 win.

The Morris sisters – Tori (20 points) and Olivia (seven) – did much of the damage as usual. The Lions then romped over Hohenfels 35-7 in their second game. Baumholder's Caleb Pigge' didn't dunk it, but his hand was well above the rim after laying it in on Wednesday, Feb. 23, 2022, at the DODEA-Europe Division III basketball tournament. (Kent Harris/Stars and Stripes)

Ansbach, however, turned it around against Spangdahlem, showing a lot more energy in a 45-22 victory over the Sentinels.

“We just weren’t ready,” said coach Michael Lee Hunt - whose team had issues getting through the gate - of the first game. “Not mentally ready.”

Hunt said he saw the team he recognizes in the second game as Heaven Jackson scored 19 points.

Now, said his team “cannot afford another loss” if it wants a rematch with the Lions in the finals. It could take another 10 games over the next two days to determine that. 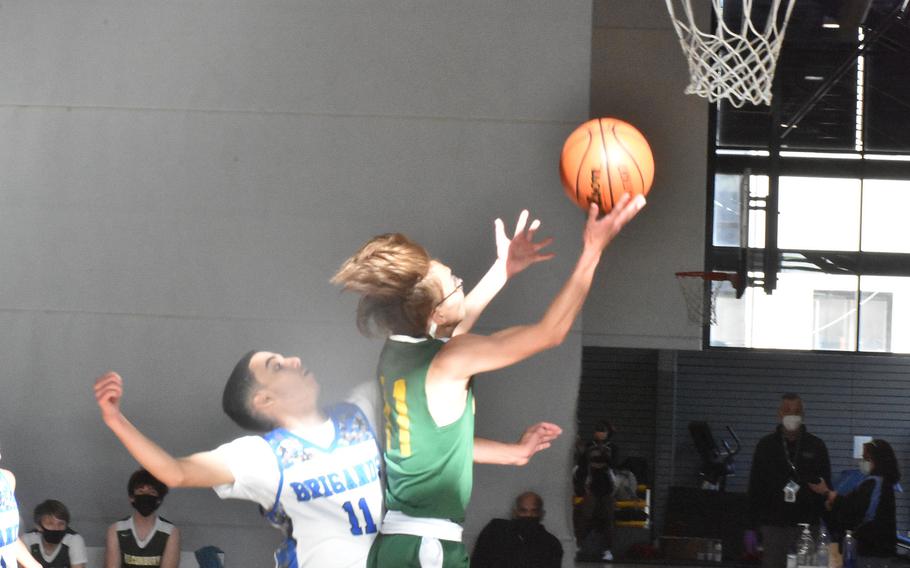 Alconbury's Alfonso Sanchez drives for a basket on a sun-speckled court while defended by Brussels' Isaiah Rivera on Wednesday, Feb. 23, 2022, at the DODEA-Europe Division III basketball tournament. (Kent Harris/Stars and Stripes)