Saints and Cougars split a pair of games 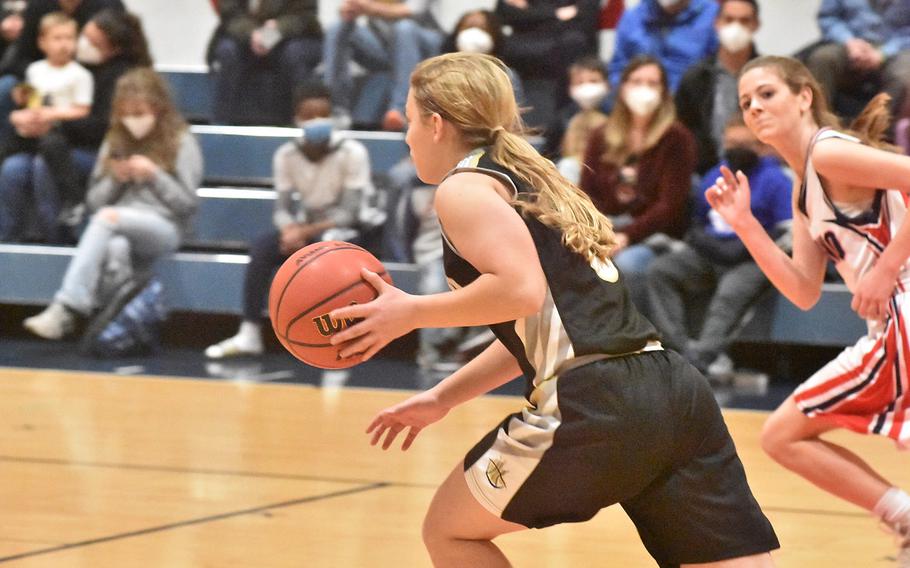 Vicenza freshman guard Mackenzie Blue is off to the races after coming up with a steal in the Cougars’ 34-9 victory over the Aviano Saints on Friday, Feb. 4, 2022, while Aviano’s McKinley Carroll tries to catch up. (Kent Harris/Stars and Stripes)

AVIANO AIR BASE, Italy – If one looked only on the court – ignoring the mask bedecked spectators, coaches and players on the bench – it almost felt like a pair of normal basketball games Friday night.

Of course, the reality of an ever-present coronavirus pandemic intruded once the players stepped off the court. But for at least a few minutes it was just about basketball – though there were certainly more than few signs of rust or the kind of inexperience you get when you can’t compete on the court for more than a year.

“The kids deserve it,” Vicenza girls coach Greg DeJardin said of the hastily arranged games between his Cougars and the host Aviano Saints. “If it’s possible to get them on the court, they deserve it.” 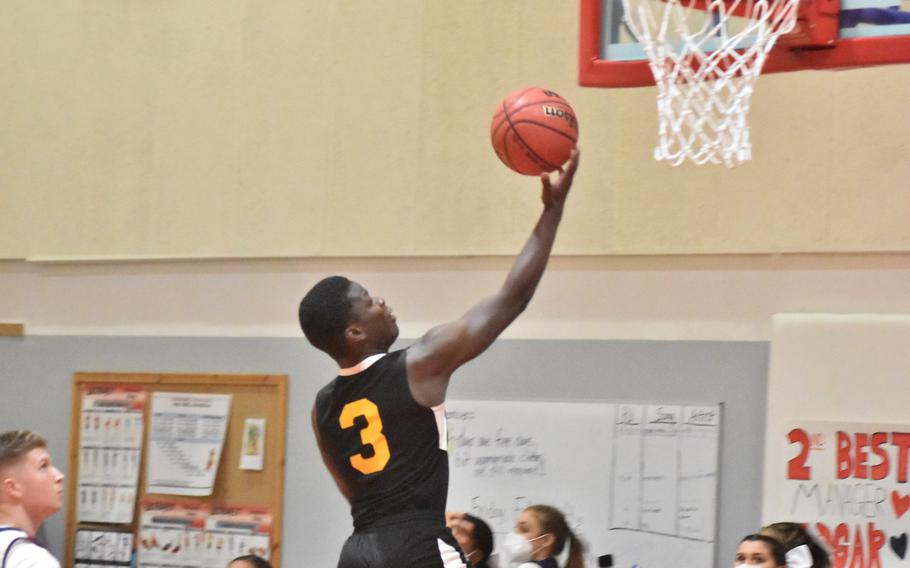 Vicenza’s Dominique Slater directs the ball toward the basket on Friday, Feb. 4, 2022, in Aviano’s 51-48 victory over the Cougars. (Kent Harris/Stars and Stripes)

Aviano 51, Vicenza 48: After a lopsided girls contest, the highly competitive boys contest came down to the final seconds.

A three-point shot from Vicenza’s Will Besterman tied the game at 48-48 with 1 minute, 11 seconds to go. The Cougars then had multiple chances to take the lead on their next possession but failed to do so.

Aviano’s Tarajh Bradley tried the feed the ball inside to Aidan Haas during the Saints’ next time with the ball. The pass was almost intercepted, but Haas managed to tap it back to Bradley, who then drained a three-pointer of his own with 26.7 seconds to go.

Besterman, who finished with 13 points, then missed two three-point shots and Joe Spencer – who had a game-high 17 with nine rebounds – also missed closer to the basket before the Saints ended up with it after a wild scramble and the clock expired.

“We had a bunch of chances,” Cougars coach Jesse Woods said.

Aviano led for much of the way after a 17-7 advantage in the second quarter. The Cougars never managed to take the lead or even tie the contest until Besterman’s third long-range basket of the contest.

Aviano coach Kevin Lehde said it just takes time to learn to play his program’s 1-3-1 zone defense. And the Saints haven’t had a lot of time on the court, losing their first four contests.

“I think this was the first game of the season where we played defense the way we’ve been teaching it,” he said on his team finding its way to the win column. 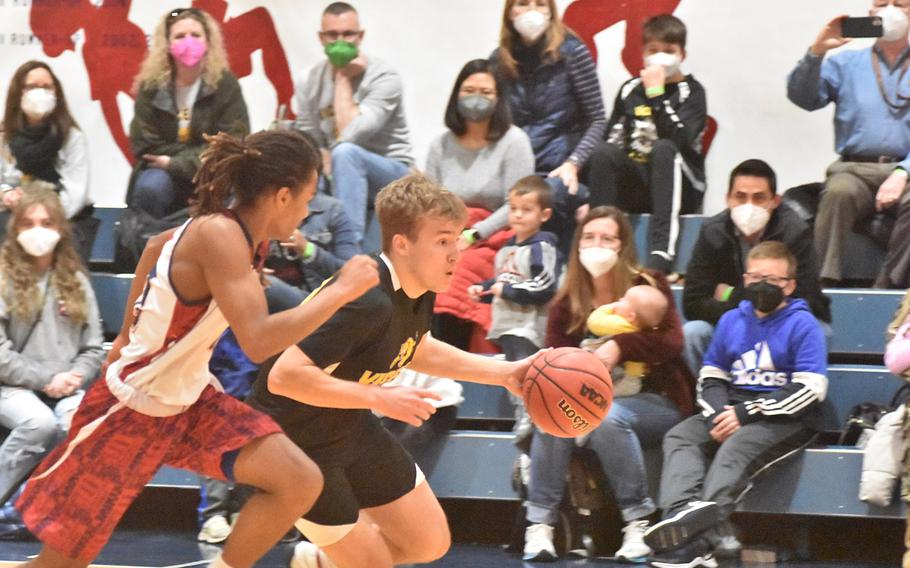 Vicenza’s Will Besterman dribbles up court while pressured by Aviano’s Deon Walker in the Saints’ 51-48 victory over the Cougars on Friday, Feb. 4, 2022. (Kent Harris/Stars and Stripes) 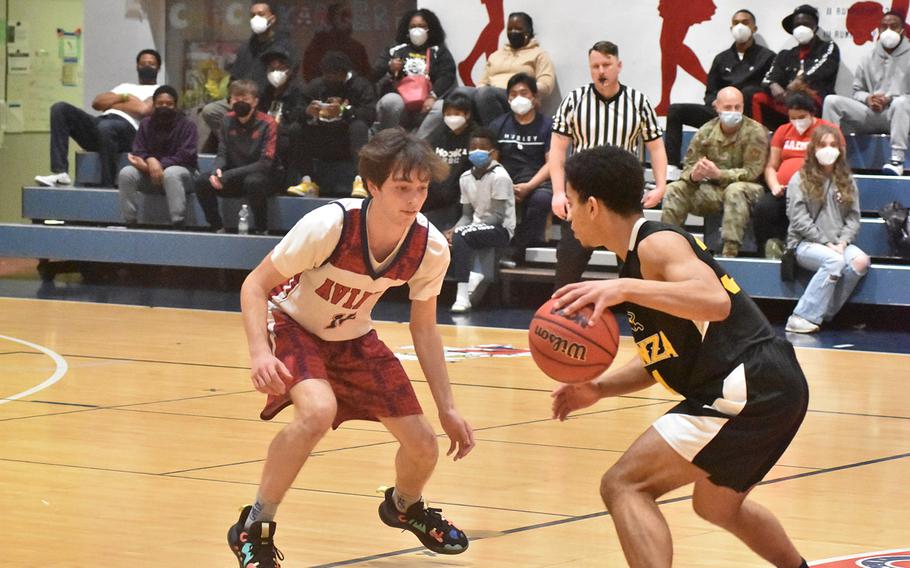 Aviano’s Gabe Fabbro had an eye for the ball on Friday, Feb. 4, 2022, coming up with seven steals in his team’s 51-48 victory over Spencer Gideon and the Cougars. (Kent Harris/Stars and Stripes)

Vicenza 34, Aviano 9: It was only the third game of the season for both girls teams – all against each other. And all three have ended in roughly the same fashion.

Friday, Aviano turned the ball over 17 times in the first quarter alone and increased that total to 28 by halftime. Vicenza, led by sophomore Addie Kropp and freshman Mackenzie Blue, took advantage and led 20-7 after two periods. It was never closer than double digits after that.

Kropp and Blue combined for 12 points and seven other teammates scored as the Cougars improved to 3-0.

The teams meet up again Saturday in Vicenza. 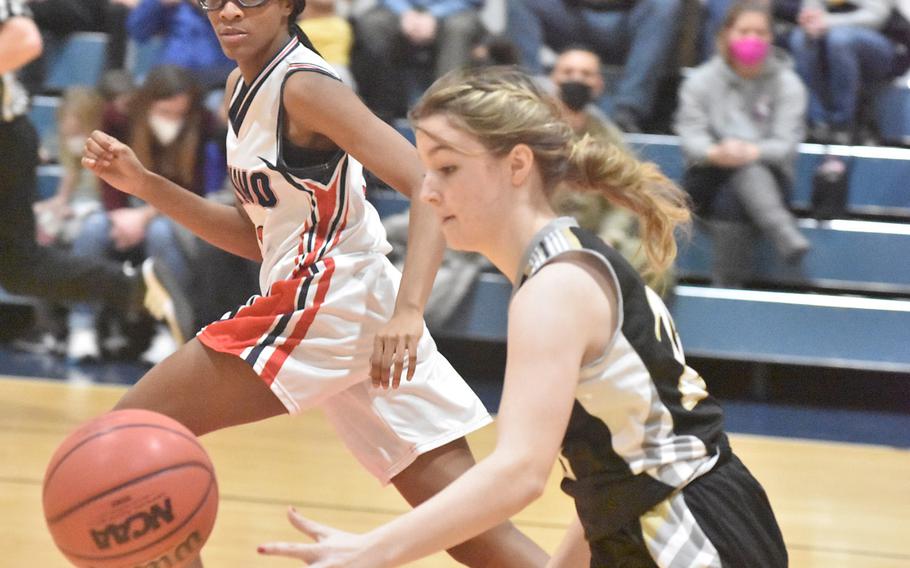 Aviano’s Serena Taylor watches Vicenza’s Sara Fitch try to keep the ball in front of her during a fast break on Friday, Feb. 4, 2022, in the Cougars’ 34-9 victory. (Kent Harris/Stars and Stripes)