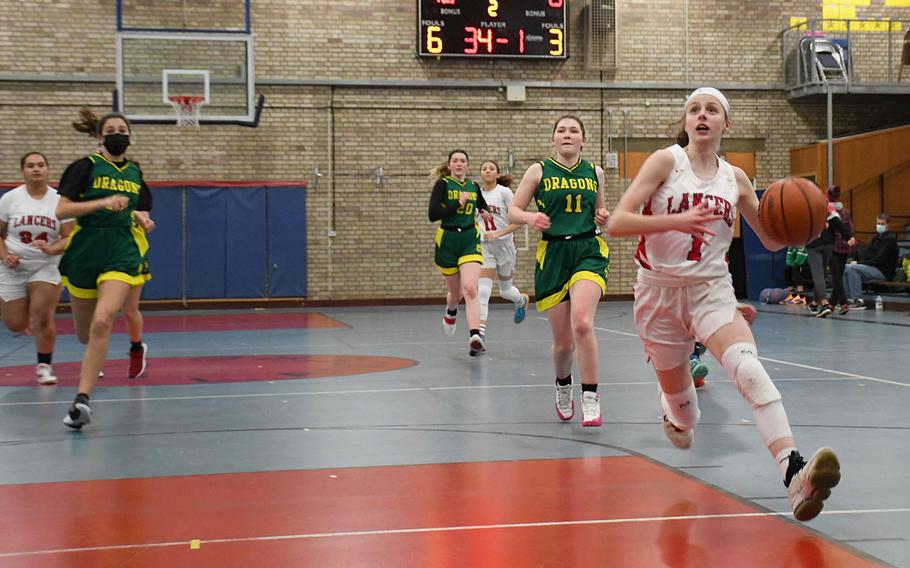 Lakenheath's Jesse Moon, who led her team with 18 points, drives the ball for a layup on a breakaway during a game Tuesday, Jan. 18, 2022, against Alconbury. (Kyle Alvarez/Stars and Stripes)

RAF LAKENHEATH, England – Basketball has returned to the two American high schools on U.S. military bases in the United Kingdom. Close games could be a bit further away.

Alconbury and Lakenheath squared off for the second time this season on Tuesday and the results were a pair of mercy-rule victories that went in favor of the larger school.

But coaches and players from both Alconbury (112 students) and Lakenheath (358) were glad to just be on the court again after more than a year off due to COVID-19 protocols. 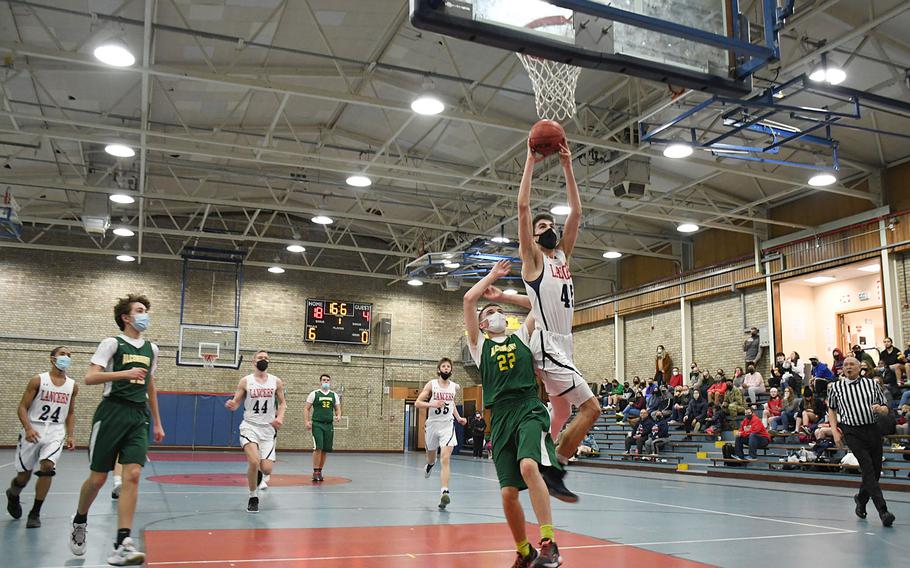 Lakenheath’s Gabriel Stephenson, the Lancers team captain, leaps high to try to score on a dunk against Alconbury in a game on Tuesday, Jan. 18, 2022. (Kye Alvarez/Stars and Stripes)

“It’s a relief being able to play since we’ve bene stifled by COVID for the last two years,” Lancers girls coach Jonathan Mittenzwey said. “There have been a lot of concerns that we would still be in that position this year. It’s good to be able to get the girls some games in.”

“We have a lot of new kids who have never played before,” Alconbury coach Justin Saunders said. “It’s important that we can get them out here and get them some experience. They’re starting to come together and they have a lot of heart coming from a small school.” 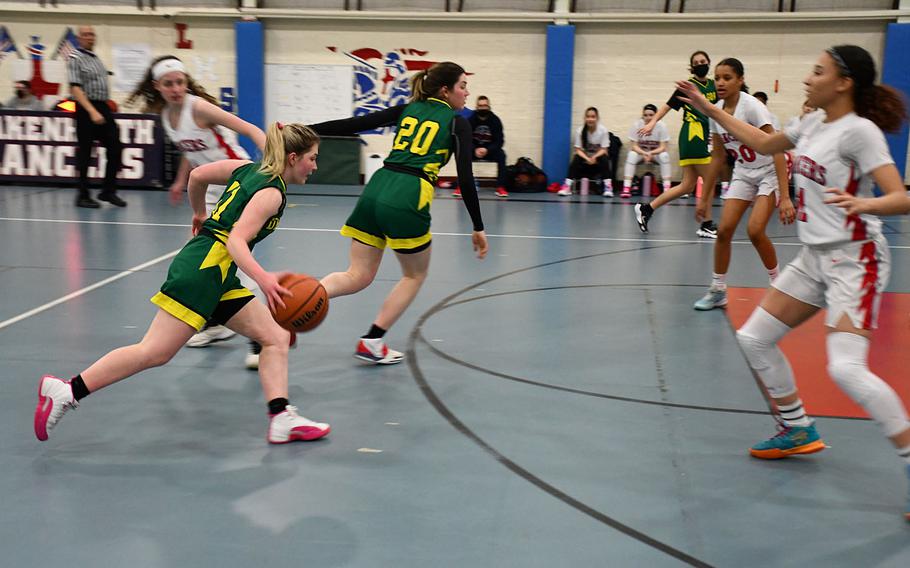 Alconbury's Kennedy Liddell drives into the Lakenheath defense in a girls basketball game between the two schools on Tuesday, Jan. 18, 2022. (Kyle Alvarez/Stars and Stripes)

The boys game was fairly similar, though Alconbury kept it closer in the first half.

Alconbury’s offense came alive in the second quarter, but the Dragons still trailed 41-23 at halftime. Lakenheath’s defense stiffened in the second half, limiting Alconbury to just eight points.

“It’s good playing teams like the Lancers because all we can do is improve,” Alconbury coach Ron Behr said. “And if we do get to go to Euros, we’ll be ready to play other DIII schools, teams our size.” 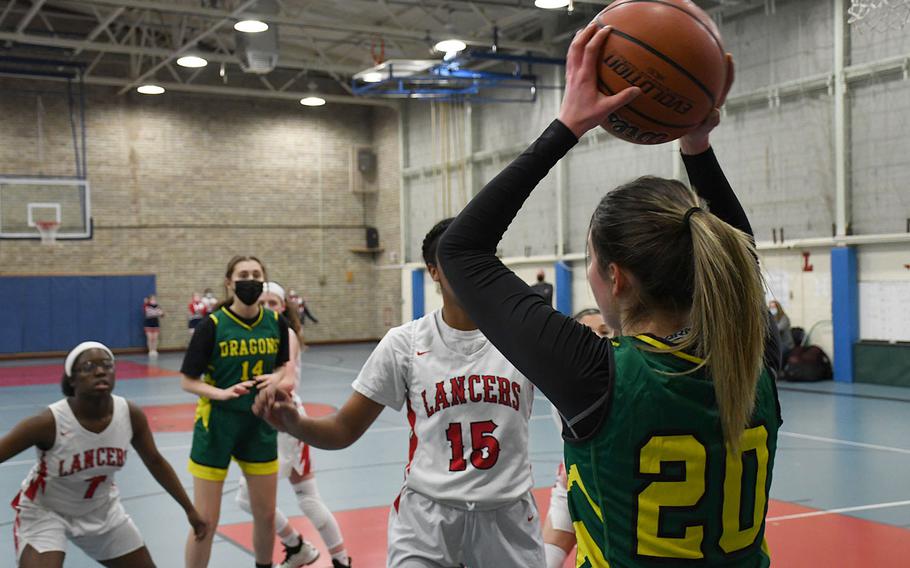 Lakenheath's Sadie Liddell looks for an open teammate in the Lancers' game against Alconbury on Tuesday, Jan. 18, 2022. (Kyle Alvarez/Stars and Stripes)

Both schools are scheduled to play this weekend against local national competition in Cambridge. 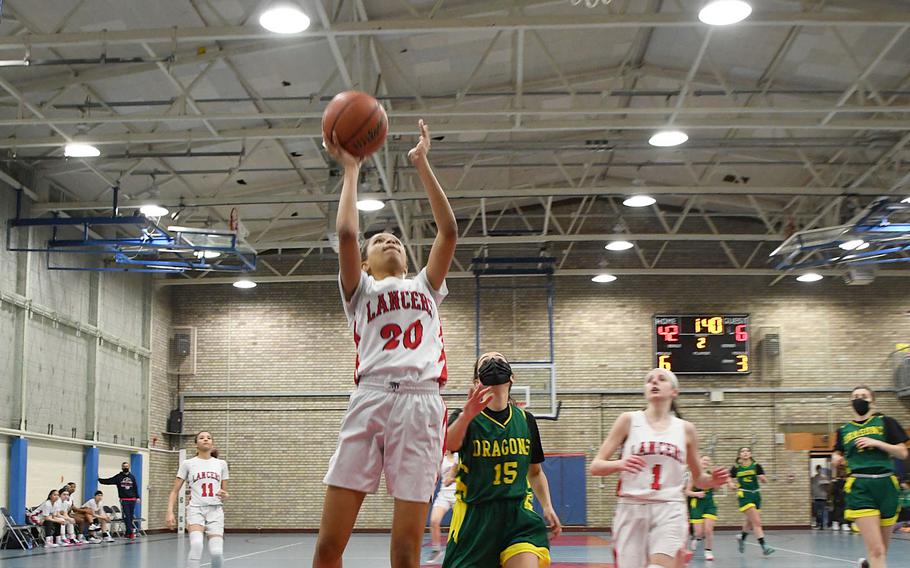 Lakenheath's A’Lydia McNeal lays it up during a basketball game with Alconbury on Tuesday, Jan. 18, 2022. (Kyle Alvarez/Stars and Stripes)