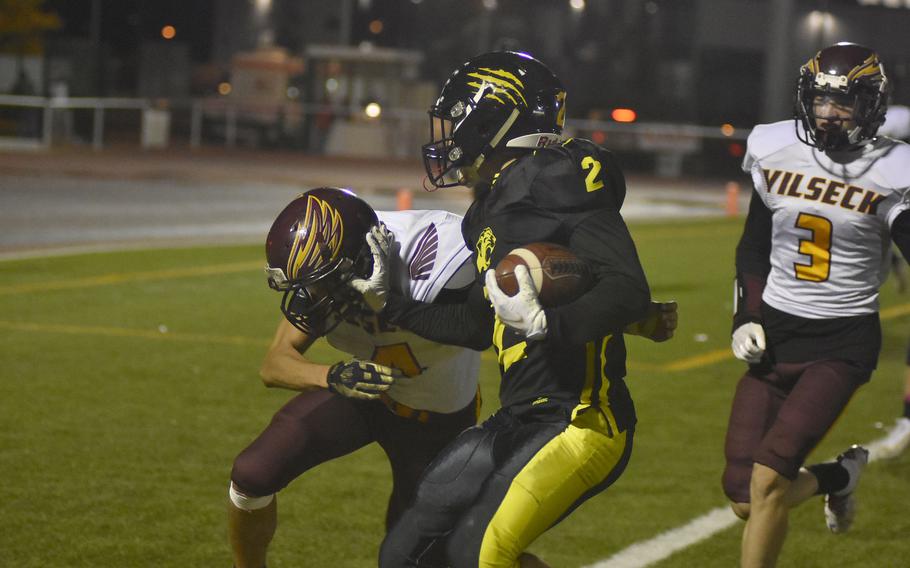 Buy Photo
Vilseck's Zephanyah Barnes tries to prevent a Stuttgart touchdown in the DODEA-Europe Division I title game, but Stuttgart's Tyler Farrar keeps him away with a stiff arm. The Panthers prevailed 57-14 on Saturday, Oct. 30, 2021. (Kent Harris/Stars and Stripes)

KAISERSLAUTERN, Germany — Hours before their DODEA-Europe Division I title game against Vilseck on Saturday, the Stuttgart Panthers stood and watched the scoreboard light up in the Division III championship game.

Something must have rubbed off.

The Panthers capped an unbeaten season by routing the Falcons 57-14 in a game that used a running clock early on in the third quarter. 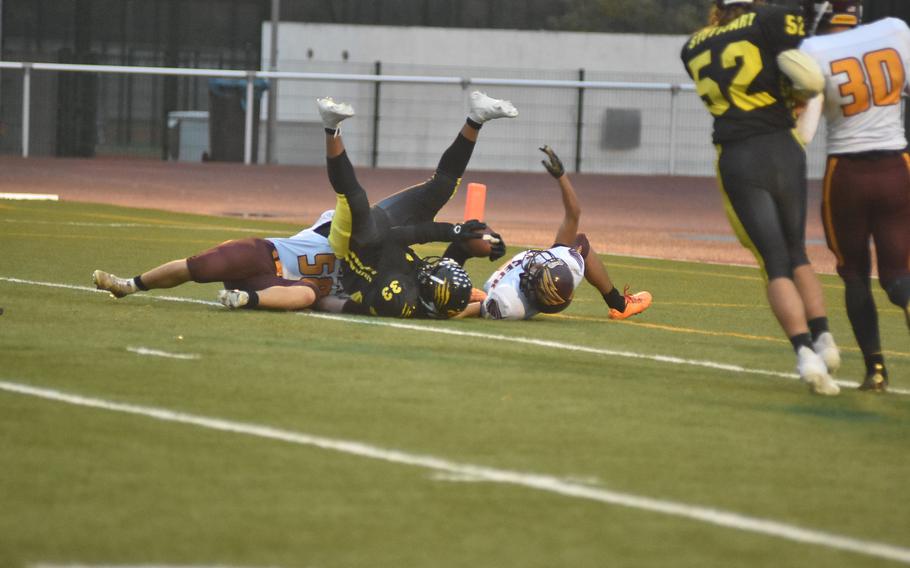 Buy Photo
Stuttgart's Trenton Jackson made it into the end zone - though not on his feet - in this play against the Vilseck Falcons in the DODEA-Europe Division I title game on Oct. 30, 2021, at Kaiserslautern, Germany. (Kent Harris/Stars and Stripes)

“We knew (Vilseck) had a lot of two-way players,” he said. “So we thought we’d keep their defense on the field a while.” 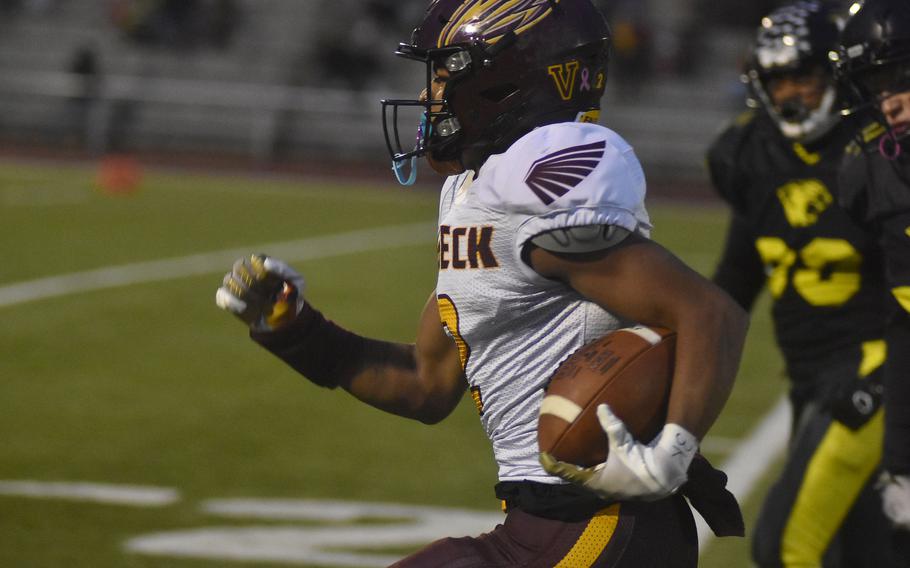 Buy Photo
Aveion Ruffin was a threat to score every time he touched the ball for Vilseck, though the Stuttgart Panthers did their best to keep the Falcons offense off the field in winning the DODEA-Europe Division I title game at Kaiserslautern, Germany, on Oct. 30, 2021. (Kent Harris/Stars and Stripes)

“He’s such a great player,” Ratcliff said. “But he can’t score if they’re not on offense.”

Ruffin did indeed do some damage, carrying the ball 12 times for 129 yards and a pair of touchdowns in the first half.

But he couldn’t match the pace set by a handful of Panthers who barreled or sprinted their way into the end zone, one after the other — especially in the second quarter when Stuttgart put up 34 points. 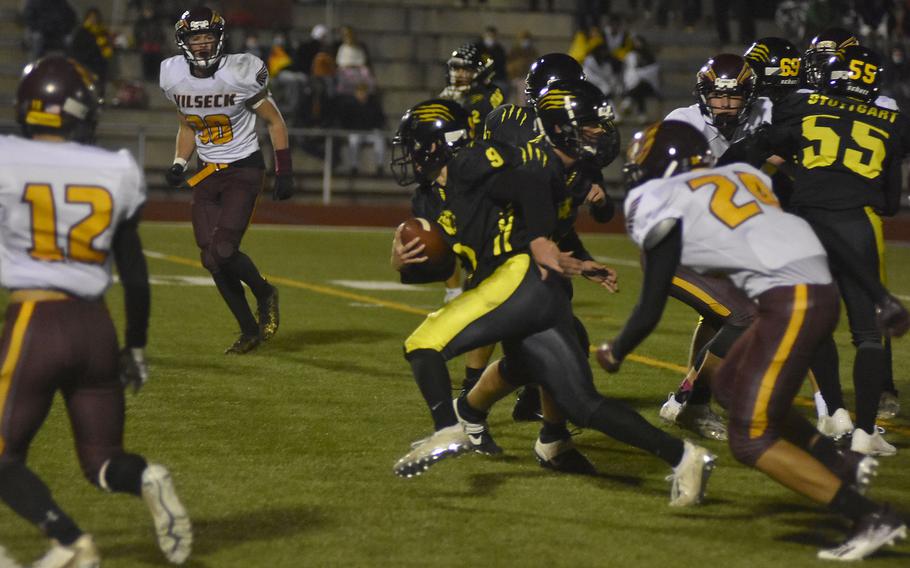 Speedy quarterback Caiden Ray was particularly troublesome, continually turning up field after deciding there was no one open to pass to.

“I told him, ‘If the play’s not there, don’t force it, just take off and run with it,’” Ratcliff said.

Ray could also hand it off to bruising runners Trenton Jackson or Christian Just or speedier backs Vincent Allen or Tyler Farrar. 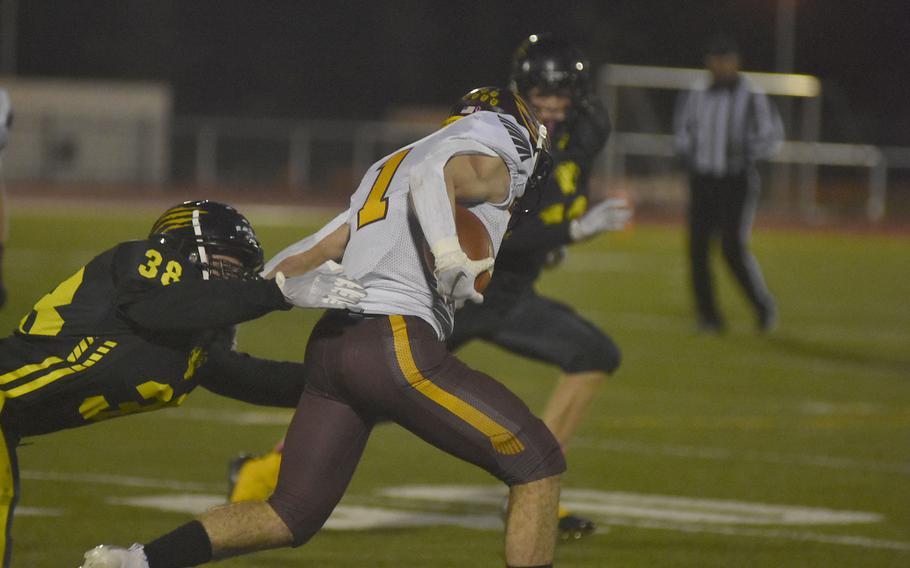 Buy Photo
Stuttgart's Christian Just grabs whatever he can hold onto to try to stop Vilseck's Nicolas Holcomb from advancing with the ball in the DODEA-Europe Division I championship game at Kaiserslautern, Germany, on Oct. 30, 2021. (Kent Harris/Stars and Stripes)

Jackson found the end zone first, dragging two Falcons with him from 5 yards out. Just’s 1-yard score with 6 minutes, 13 seconds left and Ray’s scamper for a conversion made it 16-0. Ruffin’s 43-yard scoring run and a two-point conversion cut the score in half near the end of the first quarter.

He and Ray traded touchdown runs early in the second quarter before Stuttgart went on a scoring spree. Farrar scored from 11 yards out. Ray followed less than two minutes later with a 10-yard keeper. Farrar scored again by picking up a fumble and returning it 24 yards for a score. Ray’s 35-yard keeper and an extra point made it 50-14 at halftime.

An 86-yard screen pass from Ray to Jackson four plays into the second half put the Panthers past DODEA-Europe’s 39-point mercy rule and the clock ran on.

Vilseck coach Eric Mead said just getting to the championship game was a victory for the school, which has less than half the enrollment of Stuttgart.

“Today was a loss,” he said. “But it was also a big win for our program. It’s been 26 years since Vilseck has even been to a (football) championship game.” Buy Photo
It took three Vilseck defenders to bring down Stuttgart's Vincent Allen on this play in the DODEA-Europe Division I title game at Kaiserslautern, Germany on Oct. 30, 2021. (Kent Harris/Stars and Stripes)
Kent Harris
Kent has filled numerous roles at Stars and Stripes including: copy editor, news editor, desk editor, reporter/photographer, web editor and overseas sports editor. Based at Aviano Air Base, Italy, he’s been TDY to countries such as Afghanistan Iraq, Kosovo and Bosnia. Born in California, he’s a 1988 graduate of Humboldt State University and has been a journalist for almost 38 years.