Panthers rule again on the court after outlasting Warriors 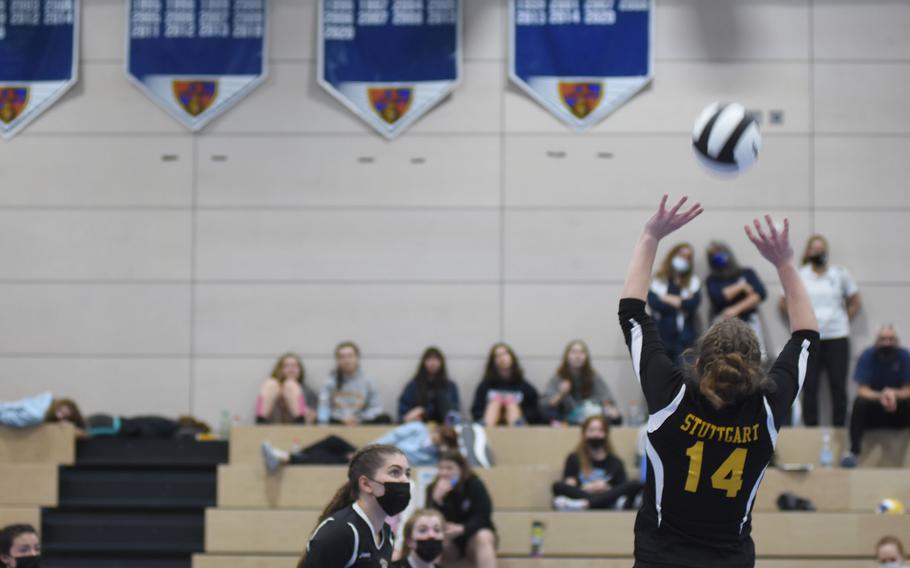 Buy Photo
Stuttgart senior setter Katie Bishop passes the ball during the DODEA-Europe Division I girls’ volleyball championships on Saturday, Oct. 30, 2021, at Ramstein High School in Germany. Bishop had 36 assists in the match. The Panthers beat Wiesbaden in five sets to win the championship. (Jennifer H. Svan/Stars and Stripes)

RAMSTEIN AIR BASE, Germany – The Stuttgart Panthers regained the DODEA Europe Division 1 girls’ volleyball crown Saturday in a battle for the ages against the Wiesbaden Warriors.

It was the first title bout since 2019, after DODEA-Europe canceled last year’s fall volleyball season due to the coronavirus pandemic.

Key for the Panthers was holding on in the fifth, tie-breaking set, after finding themselves in the hole 11-6 and the Warriors four points away from their first title since 2014.

First-year coach Bethany Trimble told her team: “Trust yourself, trust your teammates, trust your training … take a deep breath, focus and then dig in,” she said. 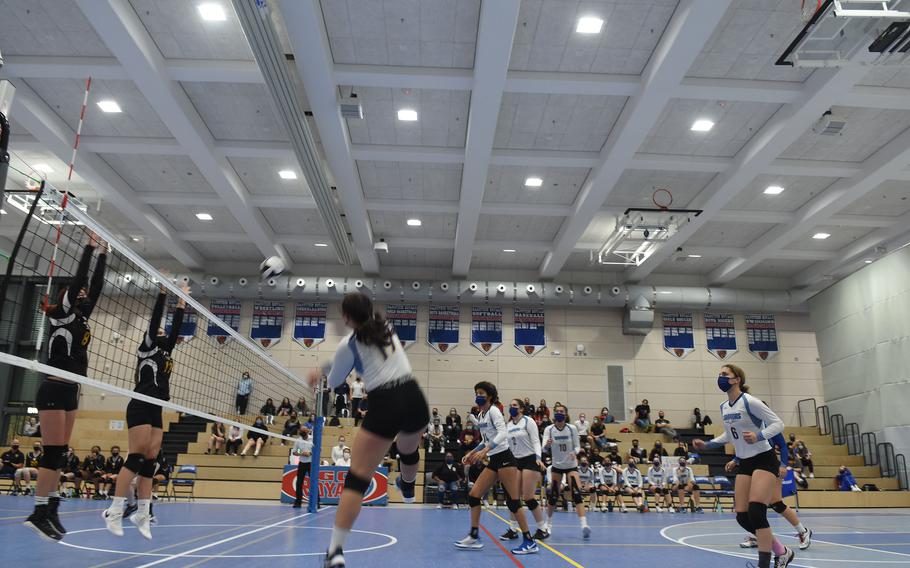 “And they did. They didn’t give up. Most teams would fold at that point, and they fought. To come back from that deficit makes me incredibly proud of them.”

Senior Katie Bishop said the Panthers kept their energy up the entire game, even after the Warriors stormed back in the fourth set and took the lead in the fifth.

“It feels great,” she said of winning the title. “We can’t let football have all the fun,” she added, referring to Stuttgart playing for a Division I football title on Saturday.

Bishop, a setter, was a key part of the Panthers’ success in finding a way around Wiesbaden’s formidable middle blockers Lyndsey Urick and Antonia Welch. Urick had helped the Warriors close out Ramstein in an earlier semifinal with a string of kills and a scoring block at the net. 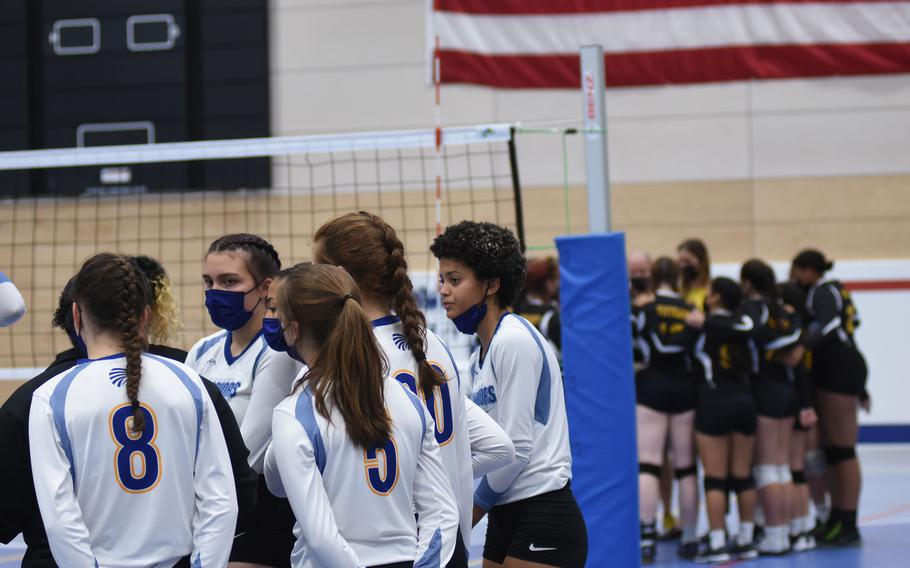 Buy Photo
Wiesbaden and Stuttgart huddle up during the DODEA-Europe Division I girls’ volleyball championships on Saturday, Oct. 30, 2021, at Ramstein High School in Germany. The Panthers beat Wiesbaden in five sets to win the championship. (Jennifer H. Svan/Stars and Stripes)

Against Wiesbaden, Bishop directed the ball to Stuttgart’s outside hitters, Sofia Gentile and Sam Caldwell, who found a hole in the Warriors’ defense just inside the far-left corner of the court.

Bishop “was trying to push the ball to the pin (at the edge of the net) and use their line and go over their other blockers,” Trimble said. “Our hitters were able to find that seam.”

Caldwell and Gentile led the Panthers with 14 and 10 kills, respectively. Bishop had 36 assists in the match.

Wiesbaden senior Alynna Palacios, a setter and outside hitter, kept the Panthers second-guessing all match with hustle and various scoring tactics. Palacios, named the tournament’s most valuable player, sometimes spiked the ball, other times tapped the ball over the net; she also blocked, set the ball and saved points with key digs. She scored nearly half the Warriors’ points in the final set.

“I’m happy,” Palacios said of how the Warriors played against Stuttgart. “It’s a mental game with us. We think Stuttgart: ‘Oh, they’re the best,’ but by going five sets, (we showed) we can compete with them.” 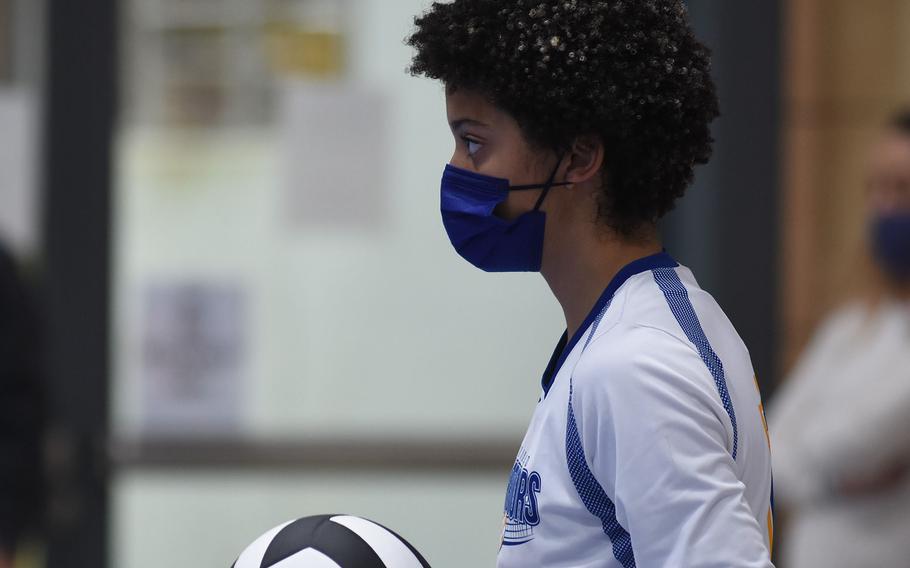 Buy Photo
Wiesbaden senior Alynna Palacios was named the most valuable player of the DODEA Europe Division 1 girls’ volleyball championships on Saturday, Oct. 30, 2021, at Ramstein High School in Germany. Palacios is a setter and outside hitter. Wiesbaden lost to Stuttgart in the finals in a hard-fought, five-set match. (Jennifer H. Svan/Stars and Stripes)

Wiesbaden coach Malia Taiafi-Husseini said it was a thrill to be playing in the finals, something the Warriors didn’t expect: “Our main goal was just to make the semifinals.”

“Both teams brought it,” she said. “They played to the end, and they fought for every point, which was amazing, after coming back from a whole year of no volleyball and not being able to be on the court.”

Above all, Taiafi-Husseini wanted her team, half of which are seniors, to enjoy the moment. “I’m like: ‘Hey, you’re never going to get to do this again so just have fun and keep swinging.’ ”

Stuttgart and Wiesbaden earned spots in the finals with semifinal victories Saturday morning. The Warriors took down Ramstein, the 2019 defending champion, in straight sets, 27-25, 25-18. The Panthers, meanwhile, needed three sets to get past Kaiserslautern, 25-22, 21-25, 15-10, giving them the chance to seize back the title they lost two years ago against Ramstein.

Kaiserslautern coach Zac Robinson said the Raiders consistently served well in the match and “had a lot of good swings,” especially from outside hitter Rebecca Lagares.

“To get to go out with a victory is awesome, especially for our seniors,” said Robinson, noting that it’s been at least 13 years since the Raiders last made it to the European semifinals.