Teams to battle it out on courts in Germany, Italy 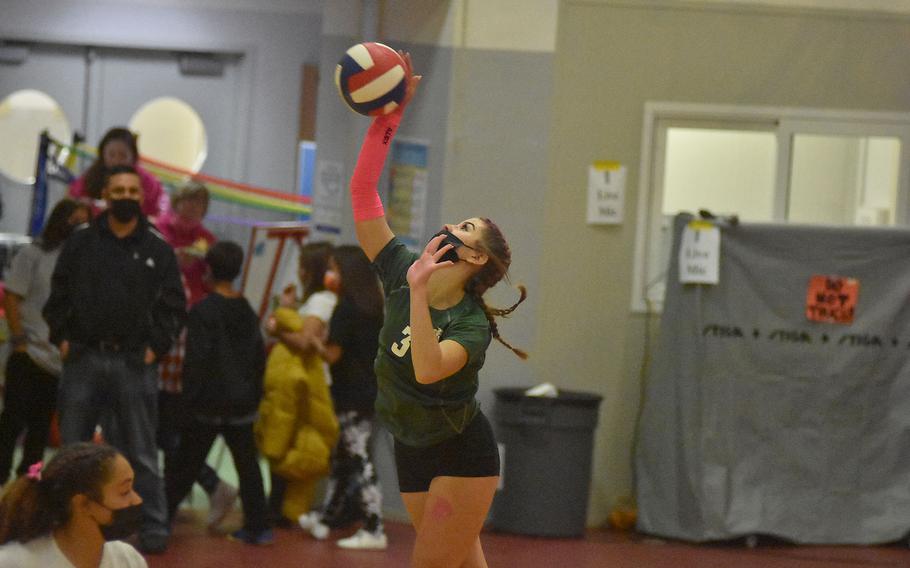 The 2021 DODEA-Europe volleyball season comes to an end this weekend with two-day tournaments in Germany and Italy, the first postseason volleyball for the organization in two years after the COVID-19 pandemic canceled the 2020 season in its entirety.

The events are shorter and more diffuse than pre-pandemic editions of the girls volleyball tournament, which rounded up all DODEA-Europe schools at every competitive level to the Kaiserslautern Military Community for three days of competition. This year, due to COVID-related travel restrictions, Division II teams south of the Alps will meet for their own tournament in Vicenza while Division I and III teams assemble in the KMC, and those events will each run Friday and Saturday only.

Boys volleyball, played only by southern DODEA-Europe schools, will hold its tournament at the American Overseas School of Rome.

The Division I girls bracket promises to be particularly competitive after a fierce regular season in which the major players exchanged wins and losses.

The Ramstein Royals edged the Stuttgart Panthers to win the 2019 DODEA-Europe Division I championship match, the last DODEA-Europe volleyball post-season match to be played until these tournaments kick off Friday at Ramstein and Kaiserslautern.

Both programs have undergone major changes in the 24 months since that epic showdown. Stuttgart has a new coach and no holdovers from its 2019 varsity squad, while Ramstein has just one varsity player back.

But the Royals and Panthers are back in the familiar position among the favorites as they enter this weekend.

Stuttgart stayed in first place throughout the season and was rewarded with the top seed in Pool A. Ramstein, which ruined Stuttgart’s perfect season with an impressive 25-19, 25-23, 24-26, 25-21 win on Oct. 9, is the second seed in the pool.

Fellow big German schools Kaiserslautern and Wiesbaden headline the opposite side of the bracket. Kaiserslautern, which recorded an early-season sweep of Ramstein on Sept. 18, is the top seed in Pool B. Wiesbaden, which swept Ramstein at the same three-team event at which the Royals beat Stuttgart, is the No. 2 seed.

Former Division II power Black Forest Academy and SHAPE round out Pool A, while Lakenheath, Frankfurt International and Vilseck fill out Pool B.

The South Region tournament in Vicenza features mostly Division II squads with some minor geographic adjustments. Tournament host and 2019 Division II champion Vicenza is a favorite, as is archrival Naples. Sigonella, which formerly played at the Division III level in the postseason despite rarely seeing their Division III peers in the regular season, will this year share a playoff bracket with their Italian neighbors.

That streamlines the proceedings for the Division III tournament back in Germany, leaving a six-team round-robin field headlined by 2019 champion Spangdahlem, which beat Sigonella for that title. Ansbach, AFNORTH, Baumholder, Brussels and Hohenfels complete the small-school field.

The AOSR boys are in the same enviable position as the Vicenza girls as they both host their tournament and own its most recent title. The Falcons will look to fend off five challengers - Aviano, Naples, Marymount, Rota and Vicenza - in the round-robin competition.

Preliminary play in all tournaments begins Friday ahead of Saturday championship matches.