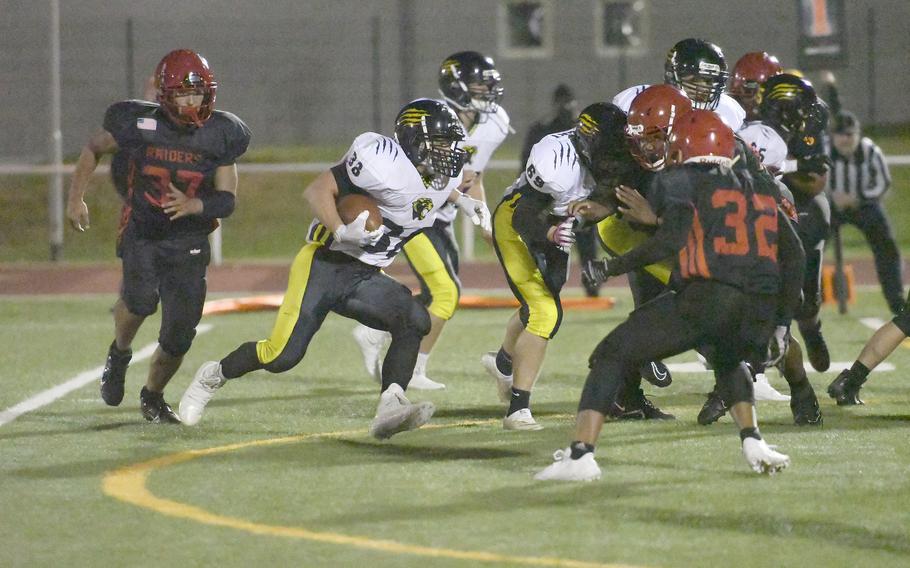 After a 2020 season canceled by COVID-19, any DODEA-Europe championship football games are welcome. But the two scheduled for Saturday at Kaiserslautern High School look to be excellent matchups under any circumstances.

The Division I game between the Stuttgart Panthers and Vilseck Falcons carries all manner of fascinating sports subplots.

There’s the classic underdog angle, in which the plucky Falcons punch above their weight against a much larger school.

There’s a chance at redemption, as Vilseck looks to shake off years of Division I struggles - and an 0-2 start to this season - with a long-awaited championship breakthrough.

And there’s the simple but compelling fact of a rematch of a great game - namely Stuttgart’s gritty 15-6 win over the Falcons in their Sept. 11 season opener.

Beyond those narratives, there’s a football game between two quality squads.

One DODEA-Europe coach who faced both the Panthers and Falcons shared some insight with Stars and Stripes before Saturday’s decisive game.

The coach praised Vilseck’s “old-school” and “disciplined” approach to the game, an identity the Falcons have long nurtured even in years when success proved more elusive. Offensively, Vilseck’s running game can be difficult to get a handle on.

“If you can’t contain the outside,” the coach said, “they will run all over you ... then run it up the gut.”

Stuttgart might be up for such a challenge. The opposing coach emphasized to Stars and Stripes that the reigning champions have an “oppressive defense” that can wear down even the most well-equipped offense. But the coach added that the Panthers punctuate that steady pounding with “swarming blitzes” that can force turnovers and sacks.

The Panthers’ 15-6 defeat of the Falcons on opening weekend held up as one of the most competitive games of the season. Expect Saturday’s rematch to live up to that standard.

While Stuttgart and Vilseck prepare for a potential defensive grind, the participants in Saturday’s other championship game are gearing up for a shootout.

The Baumholder Bucs beat the Spangdahlem Sentinels 71-60 last weekend in a regular-season finale that doubled as a preview of Saturday’s Division III championship game at Kaiserslautern High School.

The two teams have been the class of the small-school ranks throughout the fall, each stocked with the kind of versatile athletes that know what to do with the space allotted in the six-man game played at the Division III level. With both teams likely to pour on the points, the game may counterintuitively be decided by defense; as a handful of key plays on that side of the ball might make all the difference.

The traditional Super Six set of football title games is this year reduced to a Final Four in the absence of a Division II championship game. Those schools decided to play just a regular season based in Italy and Spain.