Raiders favored to clean up on tennis courts

by
Kent Harris
• Stars and Stripes • October 19, 2021
This story has been corrected. 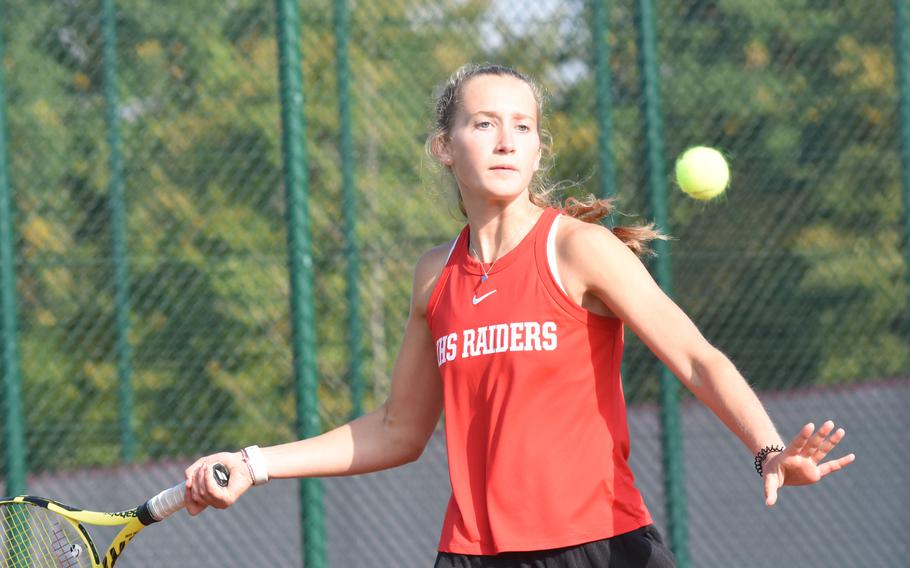 Buy Photo
Kaiserslautern senior Aiva Schmitz is the two-time defending singles champion of DODEA-Europe tennis and is heavily favored to win again this week. She’s committed to attend the University of Minnesota next year. (Jennifer H. Svan/Stars and Stripes)

It’s hard for Aiva Schmitz to remember a time when she didn’t have a tennis racket in her hands.

The 17-year-old Kaiserslautern senior, the overwhelming favorite in girls singles at the DODEA-Europe tennis championships this week, learned much of her game from her father, a former German tennis pro who runs a tennis academy.

“I’ve been around tennis my whole life,” she said.

And though she’ll be playing her final high school matches this week, it’s far from the end of her tennis career. She’s made a verbal commitment to play at the University of Minnesota next year and has an official signing ceremony scheduled for Nov. 11.

Schmitz, who holds dual citizenship, won the DODEA title as a freshman and a sophomore and was a heavy favorite a year ago before the coronavirus pandemic ended the season. She’s been nothing short of dominant this season, losing only a single game. That match - a 6-0, 6-1 victory over Wiesbaden’s Hope Goodwin – shows the gap between Schmitz and the field. Goodwin, a strong DODEA player, is the No. 2 seed.

Schmitz plays year round. She’s No. 7 in her age category in Germany. Raiders coach Eric San Pedro said most of his roster also have their rackets close by the whole year. It showed this year during the five-week DODEA season as the Kaiserslautern girls didn’t lose a single match. The boys team didn’t lose to another team, but did lose a few matches.

“I’m so blessed to have worked with such fine student athletes,” San Pedro said.

Hannah San Pedro, a sophomore, will be the Raiders second entry in girls singles. Stella Schmitz and Abigail Hover, both freshmen, are the top-seeded doubles team. They’re the No. 2 and No. 3 singles players for the Raiders, but players can’t play in more than one bracket at the tournament in Germany.

Though Kaiserslautern is expected to dominate play in Wiesbaden starting Thursday, it won’t get a chance to do so against all the DODEA-Europe competition. Due to travel restrictions, Naples is hosting a tournament on the same dates for those based in Italy. And there are unbeatens there as well.

Almost three dozen students will play on four courts in Italy to determine the winners on Saturday. Unlike in Germany, players will be allowed to compete in both singles and doubles.

Spectators will not be allowed in Wiesbaden. The Naples tournament will be played outdoors and spectators can attend.

Micah San Pedro was incorrectly identified in an earlier version of this article.
Kent Harris
Kent has filled numerous roles at Stars and Stripes including: copy editor, news editor, desk editor, reporter/photographer, web editor and overseas sports editor. Based at Aviano Air Base, Italy, he’s been TDY to countries such as Afghanistan Iraq, Kosovo and Bosnia. Born in California, he’s a 1988 graduate of Humboldt State University and has been a journalist for almost 38 years.