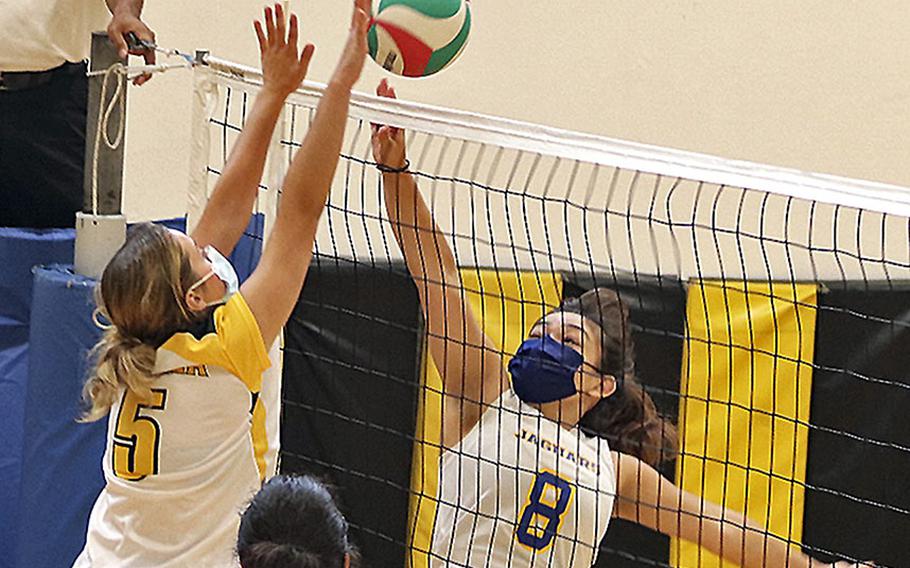 Buy Photo
Marley Mcelree of Sigonella tries to get the ball over Vicenza's Shalom Dejardin during a September match at Vicenza. There is a full slate of girls volleyball action this weekend. (Norman Llamas/Stars and Stripes)

The fall season of DODEA-Europe athletics - the first full season since the COVID-19 pandemic canceled or curtailed the vast majority of the league's usual schedule over the last 18 months - is nearing its completion.

Tennis is on a similar schedule, with six meets this weekend drawing a close to the regular season. It’s the last opportunity to prepare for next weekend’s main event, a three-day postseason tournament running Oct. 21-23 at Wiesbaden.

A full slate of girls volleyball action should help sort out the crowded and competitive divisional standings. The large-school ranks see key matchups between Kaiserslautern and Wiesbaden and Vilseck and Ramstein while Stuttgart looks to bounce back from its first loss of the season against Black Forest Academy. Division II squads Aviano and Vicenza, meanwhile, both celebrate homecoming matches in Italy.

On the gridiron, Division I frontrunners Stuttgart and Kaiserslautern square off in a battle for postseason seeding, having both secured their berths in the Oct. 23 semifinal round. Wiesbaden’s visit to Vilseck features even starker consequences, as the two schools are scrapping with idle Ramstein to fill the final two spots in the four-team playoff round. Rota’s visit to Vicenza is one of two Division II games set for this weekend, while all six Division III teams are in action as those teams vie for a berth in the Oct. 30 championship game.