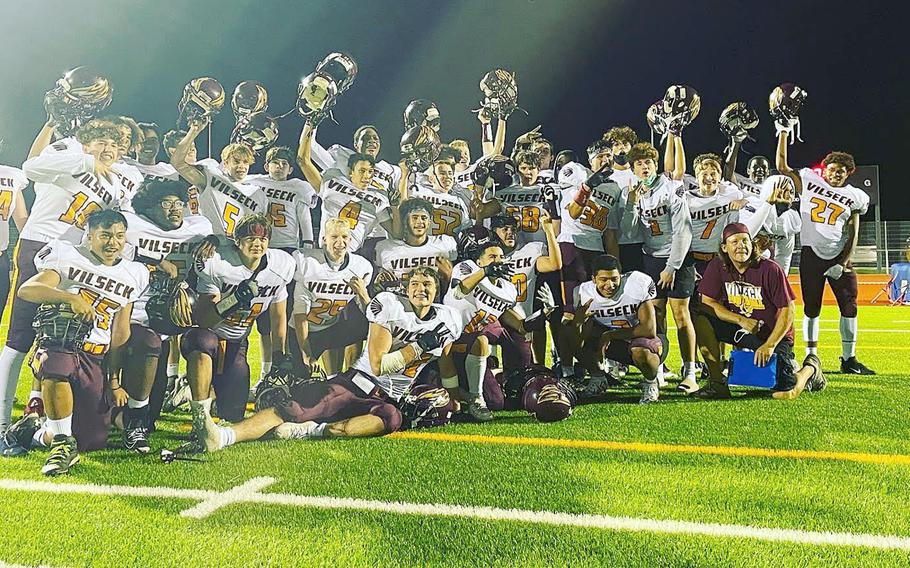 The Vilseck football team celebrates after a victory. (Photo courtesy of Valerie Lindsey)

In the preseason, Vilseck football coach Eric Mead hoped that his team would hold its own against larger Division I opposition this fall. That paradigm shifted on Sept. 24.

“Just being competitive wasn’t enough for these kids,” Mead said.

The Falcons routed traditional large-school powerhouse Ramstein 47-12 on that evening, earning their first win of the season and expanding the possibilities for the Bavaria-based school that is comparable to Division II programs in student population but a geographic fit in Division I.

First-year head coach Mead recalled telling his squad before the season that they’d again be lining up against their big German nemeses this fall. He made note of his players' reactions - or lack thereof.

“The boys did not even flinch,” Mead said. “They did not care who they played. They just wanted on the field.”

The Falcons followed through against the host Royals. Aveion Ruffin dominated with 272 rushing yards and five touchdowns as Vilseck took a 21-point lead through one quarter and cruised to a monumental win in the program’s star-crossed history.

“This was a huge win for our school,” Mead said.

Vilseck continued its years-long trend of Division I difficulties with an 0-2 start to this season. But even that couldn’t deter this team.

“We put those losses behind us and decided to just work harder,” Mead said. “We pride ourselves on our short memories.

“We only remember the last game we played, so in our minds we are 1-0.”

The Ramstein win will remain Vilseck’s most recent game until October 16, the last weekend of the regular season. DODEA-Europe is on a break the weekend of Oct. 2, and Oct. 9 is Vilseck’s turn for a bye on the five-team Division I schedule. The Falcons play Wiesbaden in their regular-season finale with the opportunity to advance to the postseason.

Having already met their initial expectations, the Falcons will now see how high they can fly.

“They are going to work hard to win every game,” Mead said of his team. “Winning our first game has them believing and believing is being halfway there.

“Needless to say, we are optimistic about the rest of the season.”