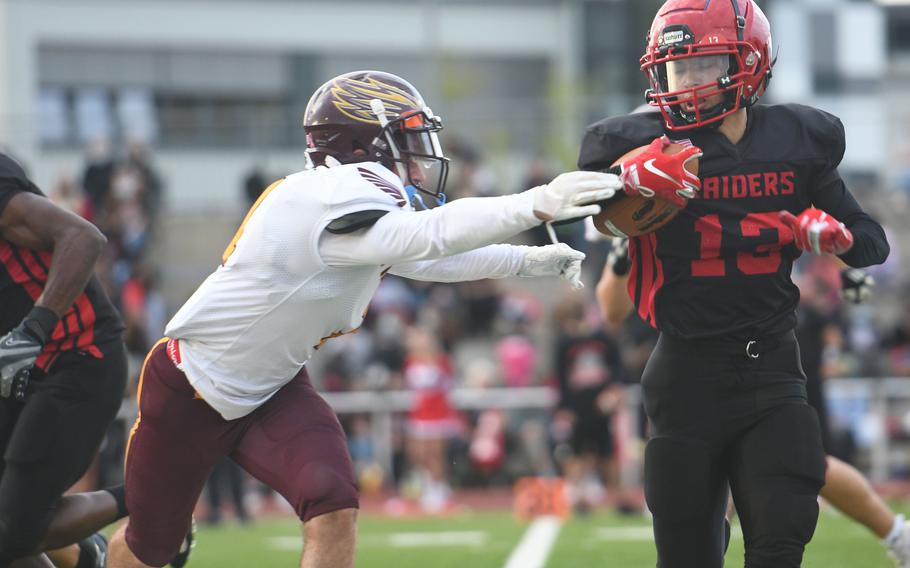 KAISERSLAUTERN -- The Kaiserslautern Raiders improved to 2-0 on the season Friday after a 33-19 victory over the Vilseck Falcons, though the final score doesn’t reflect how close the game was.

With Vilseck driving for a potential winning score late in the fourth quarter, Kaiserslautern’s Isiah Rodriguez scooped up a fumble and returned it for a touchdown, cementing the victory.

Kaiserslautern quarterback Kaylon Williams struggled in the first half but threw for two touchdown passes in the second half to give his team the lead – a week after starring in a rare victory over Ramstein.

The Raiders started off sluggishly against the pugnacious Falcons, who scored first with an early touchdown by Trevon Vargas, taking a lead that would hold well into the third quarter.

“Four plays and that score’s flipped,” said Vilseck coach Eric Mead, whose team lost its opener to Stuttgart after an early lead in that matchup as well.

A 70-yard kick return by Aveion Ruffin, who would rack up a total of 26 carries for 181 yards, set up Vilseck’s first score. But the Falcons failed to turn that momentum into points, beginning a game-long trend in which Vilseck battled to within 10 yards of the goal line several times, but couldn’t reach the end zone.

Vilseck was again inside the 10 at the start of the second quarter when Kaiserslautern’s Joseph Rodriguez-Martinez recovered a fumble and ran it back for an 85-yard defensive touchdown. The Falcons spoiled the extra point to stay ahead and after the kickoff moved down the field again. Ruffin scored on an end-around with less than a minute before halftime.

For its part, Kaiserslautern could hardly break the 50-yard line throughout much of the first half, as Williams struggled to connect with his receivers. In all, Williams would complete just six of 20 passing attempts for 141 yards. He also rushed for 49 yards on seven carries. 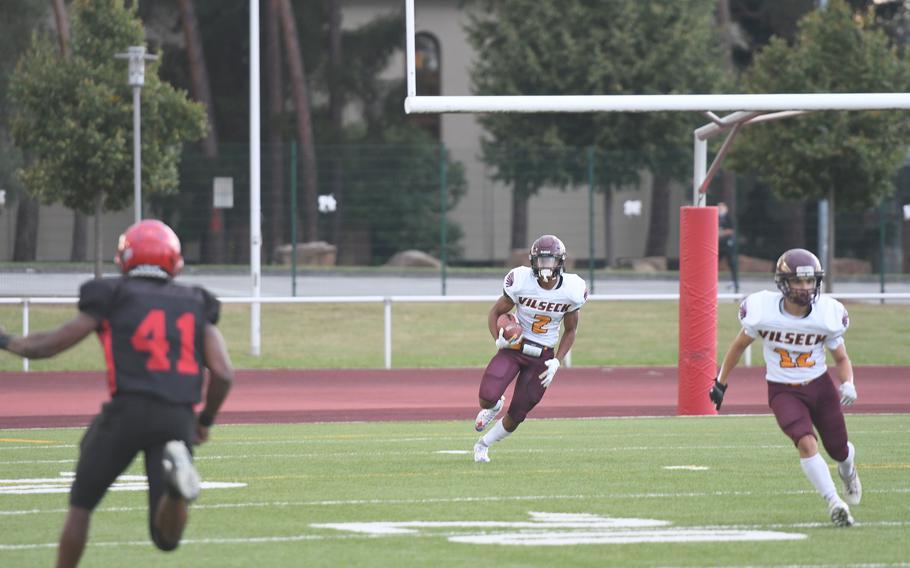 Buy Photo
Vilseck's Aveion Ruffin returns the opening kickoff for 70 yards during a face-off against Kaiserslautern on the Raiders' home turf Friday, Sept. 17, 2021. The Raiders won 33-19 for a 2-0 season start. (Chad Garland/Stars and Stripes)

The Raiders seemed to warm up about midway through the third quarter, with Williams’ 52-yard pass to Larry Hanes for a touchdown. Kaiserslautern was down by just a point. A Kaylon Williams pass to Kevan Williams — one of his four receptions for 83 yards — helped put the Raiders ahead by six.

But the Falcons came right back.

Vilseck drove again to inside the 10, but Kaiserslautern jammed up a quarterback sneak by Johnathan Bullock and a series of penalties set the Falcons back, forcing them to settle for a field goal that brought them to within three. On the sidelines later, a frustrated Ruffin exhorted his teammates to nail their assignments.

Kaiserslautern receiver Diamond Simons then tipped the ball out of bounds on the kickoff inside the Raiders’ 10 - one of what coach Robert Allen said were several mental errors that plagued his team. The Falcons then forced a safety, clawing within a point with about 9 minutes left to play.

But the Raiders finally seemed energized as they marched own the field again. Kaylon Williams rushed for a series of first downs himself. Eventually, Roberde “Junior” Celine scored on one of his 13 rushes for a total of 74 yards. Defensively, Celine had seven solo tackles and four assists.

“He’s a beast on both sides of the ball,” Allen said.

Vilseck blocked the extra point, leaving a win within reach the Falcons could secure a touchdown and two-point conversion. But Vargas and Ruffin bumped into each other on the kickoff, putting the Falcon offense a long way from the goal line at their own 15.

Ruffin broke through the Kaiserslautern defense on a 50-yard carry, but as the Falcons battled to within about 30 yards of the goal line in the final seconds, Rodriguez grabbed a loose ball and raced for the opposite end zone.

Allen told his Raiders afterward the game was a wake-up call.

“They came ready to play and we almost choked,” he said.

For Vilseck, it was a disappointing loss, but despite youth and lack of depth, Mead praised his defense and special teams. The offense is a “work in progress,” but he’s set on getting them into the playoffs, where “it’s anyone’s game.”