Tennis is back with an irregular regular season 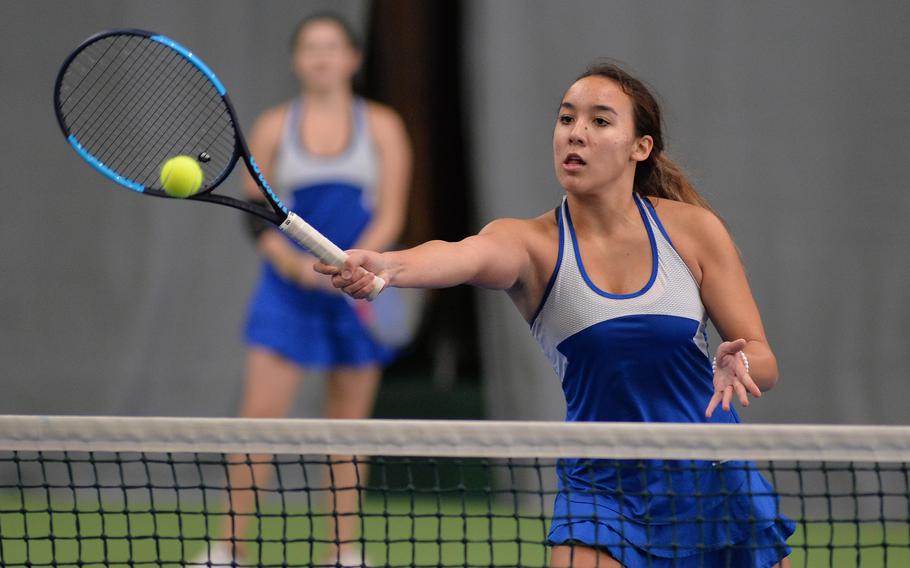 Buy Photo
Wiesbaden's Hope Goodwin hits a winner at the net against Ramstein in the girls doubles final at the 2019 DODEA-Europe tennis championships in Wiesbaden, Germany. Goodwin will return for the Warriors when the 2021 tennis season gets underway. (Michael Abrams/Stars and Stripes)

The 2020 DODEA-Europe tennis season ended without any champions – the first time in decades that’s happened.

The 2021 version that starts Saturday might not be much different on that front. Coronavirus restrictions will end matchups between schools in different countries other than Germany, the Netherlands and Belgium. There might be one or multiple season-ending tournaments, but none of them will have all the competitors present.

But unlike football and volleyball, tennis was played around American high schools in Europe last fall – up to the finals. And some of the players who qualified for last year’s finals are back this season. A few more participated in last European finals in 2019.

Heading that list is Hope Goodwin, who teamed with Jordan Bennett to win the girls’ double title.

Goodwin and the Warriors could face one of their sternest tests when the season starts Saturday against traditional power Stuttgart. The Panthers sport senior Violet-Maria Williams, who has qualified for the season-ending tournament the last three years. She’s backed by sisters Devin and Kiera French and sophomore Erin Whitten. Coach Amy Rochowiak believes all four could qualify for a European tourney in a typical season.

Sophomore Bella Rainey will join Goodwin as a veteran returner for Wiesbaden. Senior Sophia Giglio should also play a key role. As for the boys, senior captain Noah Winters is joined by returners Anthony DeWeese and Kayden Ballard.

Stuttgart’s boys feature junior Evan Shive, senior Riley Smith and sophomore Evan Hanson – all moving up to fill higher seeds than they’ve played in the past.

Among the other schools responding to Stars and Stripes queries:

Hohenfels junior Beckham Witty qualified a year ago for the tournament and is joined by four seniors and a junior, making the Tigers a potential thorny matchup for bigger schools. Senior Kate Farrell will team up with younger sister Kelly as the top doubles team.

Sigonella’s squad, smaller this year than in recent years, has a strong family connection. Coach Andrew Caro said his son, Lawrence – a returning European qualifier – and Sebestyan Hriczu lead a small boys team. Charlize Caro is joined by newcomers Sabrina Stanton and Alex Koc on the girls side, along with returnees Bri and Evi Lee.