Football teams across Europe ready to square off again

by
Gregory Broome
• Special to Stars and Stripes • September 9, 2021 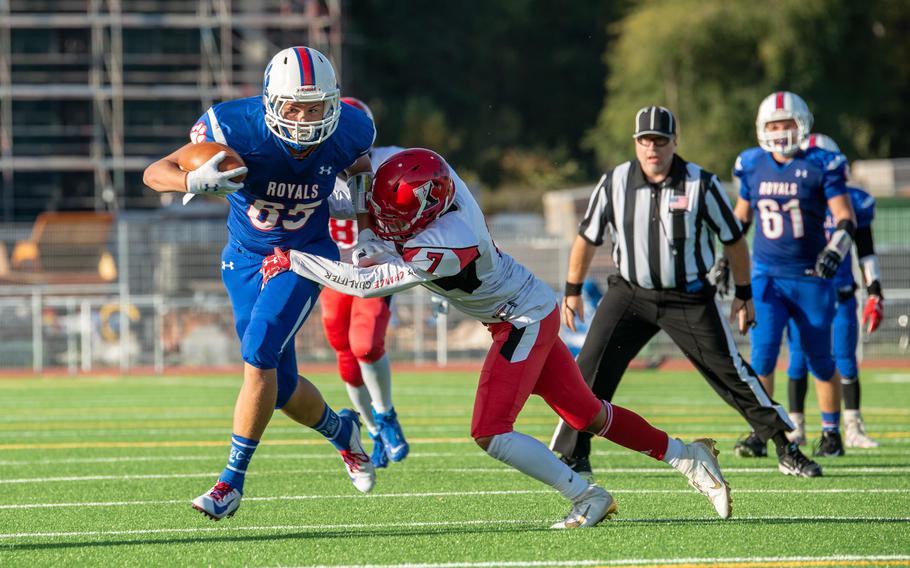 Buy Photo
Ramstein's Jayvn Hill runs toward the goal line during a game against Kaiserslautern at Ramstein Air Base, Germany, in October 2019. Following a year without football because of the coronavirus pandemic, the Royals and Raiders will get the 2021 DODEA-Europe season underway with a game at Ramstein, Friday night. (Brian Ferguson/Stars and Stripes)

The 2020 DODEA-Europe football season was canceled in its entirety in response to the COVID-19 pandemic. But its legacy will be inescapable when the 2021 season opens this weekend.

Reached on the eve of the organization’s first live football snaps since November 2019, coaches across the continent report a pervasive theme of beginning anew in the wake of the season that wasn’t.

In Wiesbaden, first-year coach Carla Nau-Redman is building around two members of the 2019 varsity squad and a contingent moving up from the junior varsity program. The rest of the roster includes a number of players “new to the school and the sport,” she said.

But Nau-Redman is pleased with the preseason returns, as even the previously uninitiated have begun to find their footing. And the squad isn’t lacking in exuberance. Nau-Redman recalled the moment when she announced to her team during a summer conditioning session that there would be a season this fall.

“Their excitement and the expressions on their faces said it all,” Nau-Redman said. “They were ready.”

In Vilseck, fellow first-year coach Eric Mead has inherited the math problem that annually confronts the Falcons. The school sits on the low end of Division I in terms of student population, and restrictions on international travel this year will again pit Vilseck against the likes of Kaiserslautern, Ramstein and Stuttgart rather than more comparably sized Division II schools in Italy.

“Our goal this year is to be competitive with these large schools without getting our kids hurt,” Mead said.

So Vilseck camp was spent largely on “the basics of the game of football,” along with improving the conditioning of long-sidelined players. But like the Warriors, the proud Falcons are thrilled to see the gridiron.

“Our kids are loving being back in pads,” Mead said. “We know we have an uphill battle in front of us...but our kids are ready to play.” 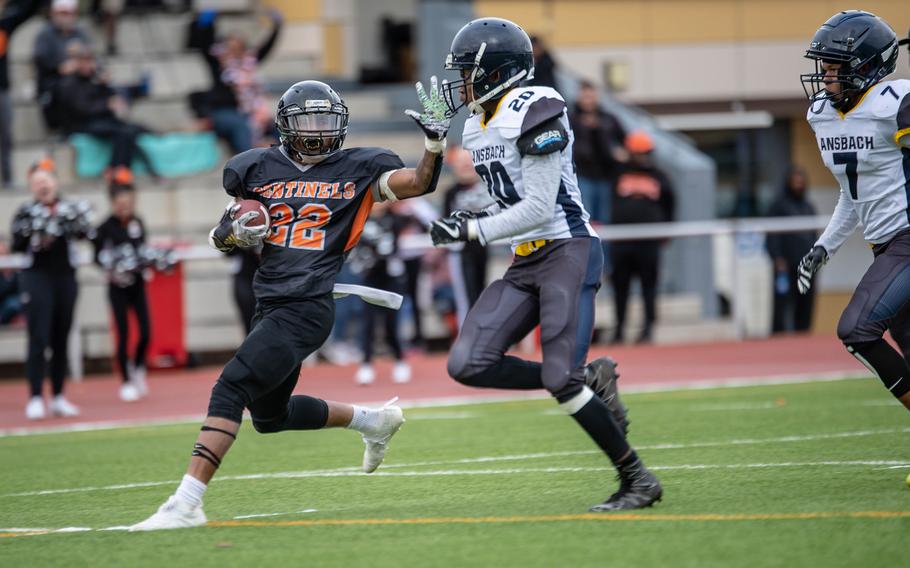 Buy Photo
Spangdahlem's Deon Montgomery tries to stiff-arm Ansbach's Josiah Jackson before he is pushed out of bounds during the 2019 Division III Football Championship game in Kaiserslautern, Germany. The 2021 season will get underway this weekend after last year's games were cancelled due to the coronavirus pandemic. (Brian Ferguson/Stars and Stripes)

In Vicenza, tenured coach Jesse Woods allows that the Cougars are “pretty much starting over” this fall.

“The biggest focus is getting the kids to understand how to play,” Woods said.

Only so much of that can be accomplished in practice, however. That’s why Woods is looking forward to the start of the regular season and the challenges only an equally motivated opponent can bring.

“There is a lot of excitement,” Woods said. “Now is the time for the real test, and that is having a little contact to see how they react.”

“Everyone is in the same boat and are going through similar challenges, I am sure,” Davis said.

With that in mind, Davis took care not to take anything for granted as he evaluated his players and prepared his team for an unprecedented season.

“The preseason focus is not to assume anything,” Davis said.

That would be a wise approach for each team on the DODEA-Europe schedule, which athletic director Kathlene Clemmons has already advised is subject to change throughout a season played in the midst of the ongoing pandemic.

As it stands, DODEA-Europe is divided into its usual three competitive divisions.

A Friday night grudge match between archrivals Ramstein and Kaiserslautern is scheduled to kick off the Division I slate. The Royals and Raiders will contend with Stuttgart, Vilseck and Wiesbaden in the large-school division. England-based Lakenheath, isolated from its traditional divisional rivals on the European mainland, expects to instead play against local teams this fall.

Division III harbors four German teams - Ansbach, Baumholder, Hohenfels and Spangdahlem - along with AFNORTH in the Netherlands and Brussels in Belgium. Plans call for some of those games between geographically distant opponents to be played on centrally located neutral fields in the Kaiserslautern Military Community.

As scheduled, the season is set to run through Oct. 30, with a league-wide bye the weekend of Oct. 2 and an as-yet-unfinalized playoff system over the last one or two weeks of that span.