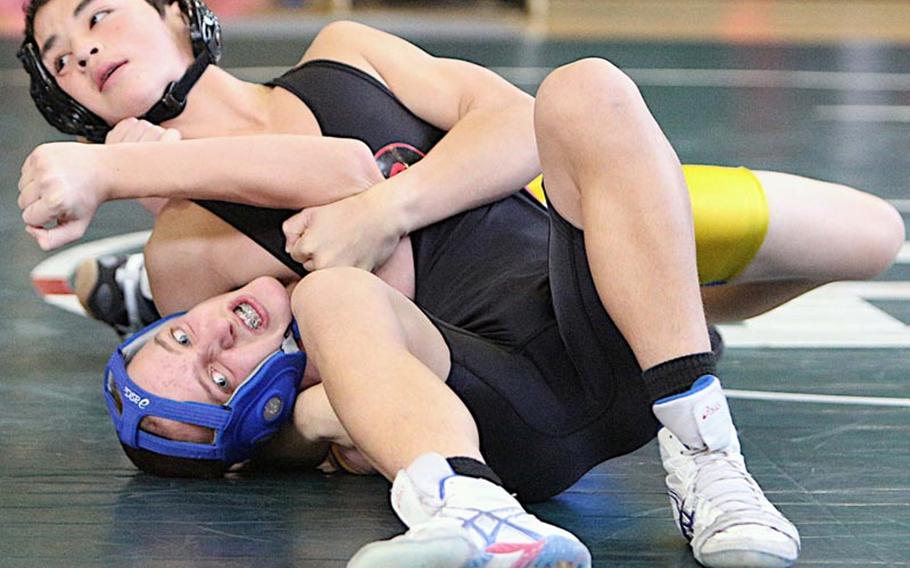 TORII STATION, Okinawa – The winter sports seasons’ start is on hold at the moment, while DODDS Pacific schools’ athletics directors and coaches scramble to adjust schedules in the wake of a directive to cut the length of seasons and number of scheduled games.

In a memorandum dated Thursday — a copy of which was obtained by Stars and Stripes —Department of Defense Dependents Schools Pacific director Dr. Linda L. Curtis said effective immediately, “the length of sports seasons will be modified to achieve better equity between schools and maximize instructional time.”

Basketball teams can now play a maximum of 16 games, down by as much as half for some DODDS Pacific teams, while wrestling has been cut to eight competitions, down by a third, according to a chart detailing the reductions.

“We will continue a co-curricular athletic program; it just won’t have the same face that it did five, or even three, years ago,” DODDS Pacific athletics coordinator Don Hobbs said.

Multiple sources have told Stars and Stripes that DODDS Pacific is facing a 41-percent cut in funding for athletics this school year. Hoff and Hobbs would not confirm that, stating a Fiscal Year 2014 budget is not yet in place. “We have targets, nebulous figures, but nothing firm,” Hoff said.

Hobbs noted that DODDS already trimmed its Far East tournament calendar and number of participants a year ago, cutting tournaments from six to four days and each team by one player.

“There’s only so far we can go,” he said. “We have to make our fair share of cuts. You have to put five players on the (basketball) court, six on the volleyball court, 11 on the soccer field. You can only reduce a certain amount, so we’re looking at other ways” to make cuts.

Schools in Okinawa, Korea and Japan have until 3 p.m. Nov. 26 to send their revised winter season schedules to Hobbs, he said.

DODDS Pacific athletic directors have a video conference scheduled for Wednesday, while Kanto Plain ADs will meet Friday at Yokota to revise their schedules.

Korean-American Interscholastic Activities Council president Daniel Hale said the directive’s cutting to two the number of games per week for DODDS teams “won’t work” for KAIAC since it plays games on Wednesdays, Fridays and Saturdays. “Our schedule is completely full.”

The league plans to wait until after the DODDS ADs conference to make any schedule revisions,” Hale said.

Officials have not made any decision on whether DODDS schools can continue playing in Kanto and KAIAC, Hobbs said. “We’re looking at addressing strictly the number of games during the regular season.”

Also, DODDS Pacific will implement what it calls an “interval week” between seasons to allow students to catch up on classwork and give them and coaches a breather, Hobbs said.

“There are a lot of schools where student-athletes play multiple sports and they go right from one season to the next,” Hobbs said. “Some schools also have coaches who coach multiple sports.”

Guam High, tied to the Independent Interscholastic Athletic Association of Guam, escapes the reductions for the moment, Hobbs said. “They’re a different entity and they have four seasons, and about half of their seasons are in synch with ours. We’re going to look at that,” he said.

Far East tournaments in team sports will remain as they are, while tournaments in individual disciplines may get a closer look, such as cross country, Hobbs said. “You might have meet a certain qualifying time over two courses before a certain date to qualify,” he said.

Curtis’ announcement also noted that teams will be allowed to participate in non-DODDS-sponsored events such as basketball’s New Year Classic and wrestling Beast and Rumble tournaments, but only as independent clubs with no support from DODDS and not wearing school names or colors.

“They would have to fully fund it on their own terms, not using our equipment, it would have to be a clear and distinct separation,” Hoff said, adding that there’s also liability concerns, such as how much a coach is responsible for the health and welfare of the players in that club.

“Referees, travel by air, transportation to and from the airport would have to be paid for,” Hobbs said. “It would be a huge fund-raising undertaking or a large amount of money would have to be donated.”

Several coaches were unhappy with the news.

“I am totally and utterly speechless,” said Steve Boyd, longtime Seoul American boys basketball coach whose teams have played as many as 57 games in a season but may have as few as 12 this year. “How am I supposed to prepare my kids for Far East with that type of schedule?”

Coach Mark Lange of Matthew C. Perry boys soccer pointed to what he called a disparity in games between soccer, 12, and softball and baseball, which will play 16 each.

“I understand we have a budget crunch, but things should be equitable,” he said, adding that DODDS could do what Perry does: Have matches officiated by two referees to reduce costs by a third and allowing for two extra weekends. “There should be 16 matches for soccer.”

Officials at international schools, which stand to lose a major portion of their schedules, said they were hoping for the best.

“I hope we can find our way forward,” American School In Japan athletics director Brian Kelley said. “Hopefully, this is not a permanent concept. We know how important activities are for kids overseas. They’re the ones who are the victims.”

“We want to continue having these programs, but we’re faced with budget realities,” Hobbs said. “I would like to think everybody would buy into it and be part of the solution. That’s what I’ll be asking them to do.”