Benton's prowess on both sides of ball lead to repeat 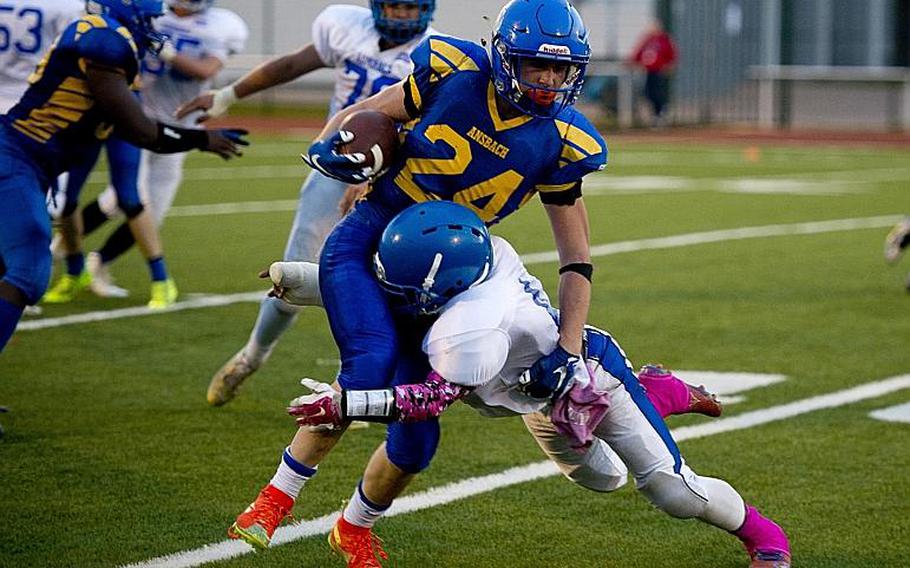 Ansbach Cougar Tyler Benton evades a tackle during the DODDS-Europe Division II football championship at Vogelweh, Germany, on Nov. 7, 2015, en route to a 32-27 victory. Benton was selected as the 2015 Stars and Stripes Europe football Athlete of the Year. (Michael B. Keller/Stars and Stripes)

For all the talk of what they’d lost, and what they’d be losing in the near future, it was easy to overlook what the Ansbach Cougars still had for the 2015 football season.

To begin with, the Cougars still had Tyler Benton.

Even as they shed starters and contributors and their school population steadily sank, the Cougars managed to field a solid collection of returnees and new recruits. But to approach the level it had reached in its 2014 championship run, the program would need an all-world season from Benton.

That’s exactly what the Cougars got.

Benton followed up his promising freshman campaign with a stellar 2015 in which he dominated on both sides of the ball. On offense, the sophomore carried 111 times for 1,175 yards and 13 touchdowns; defensively, he amassed 67 solo tackles, 24 assists, three interceptions and three fumble recoveries. It was enough to propel the Cougars to a second straight title, capped by Benton’s three-touchdown, 271-yard effort in Ansbach’s 32-27 defeat of Rota in the DODDS-Europe Division II championship game Nov. 7.

Now, Benton is the 2015 Stars and Stripes football Athlete of the Year.

For Benton, the stretches of time between the snap of the ball and the sound of the whistle was the easy part. What was more difficult was his gradual assumption of a leadership role with the program. That progression was necessary due to Benton’s elite two-way talent and the abundance of inexperienced players joining him on the Ansbach roster, but it was made problematic by his status as an underclassman.

“It’s hard sometimes, you don’t know when to step in and help somebody,” Benton said. “You just kind of lay back.”

As he so often does on the football field, however, Benton eventually found his way through. He grew “more comfortable” asserting himself with teammates as the season went on, his leadership validated by his own productive performances and the gathering momentum of a burgeoning undefeated streak that survived the entire fall.

“It got easier as the season went on,” Benton said.

Then things got tough again, this time in tangible, turf-bound ways. The last two weeks of the playoffs disturbed Ansbach’s painless regular season run and presented the Cougars with their stiffest challenges of the season: first from semifinal opponent Bitburg, its hard-hitting German rival, then from title-game adversary Rota, the rising power poised to supplant the Cougars atop the Division II hierarchy.

Again, Benton was up to the challenge. With his team peaking and formidable opposition awaiting, Benton fondly remembers that final stretch of the season, including what he considers his “two best games of the season.”

“It was amazing, those weeks preparing for those games,” Benton said. “We knew we were going to be challenged.

“Everybody kind of buckled down and proved that we are still a football school.”

In the process, Benton proved that he belongs among the continent’s best football players.