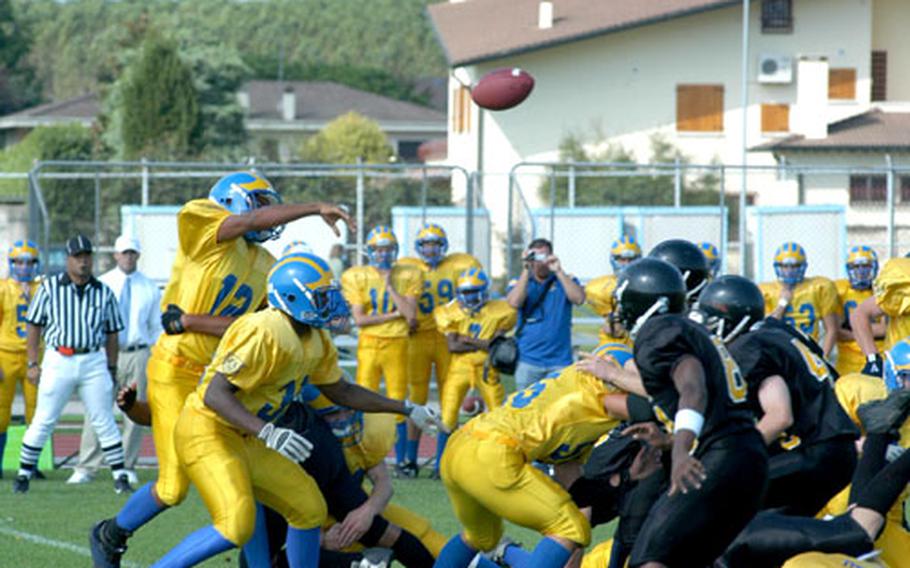 Ansbach quarterback John Willis gets off his first pass of the day against Vicenza — a short pass that Tyler Sherman turned into a 53-yard touchdown to make the score 16-0 midway through the first quarter. Ansbach won 68-0 to break the DODDS-Europe record for consecutive victories with 27. (Kent Harris / S&S)

Ansbach quarterback John Willis gets off his first pass of the day against Vicenza — a short pass that Tyler Sherman turned into a 53-yard touchdown to make the score 16-0 midway through the first quarter. Ansbach won 68-0 to break the DODDS-Europe record for consecutive victories with 27. (Kent Harris / S&S) 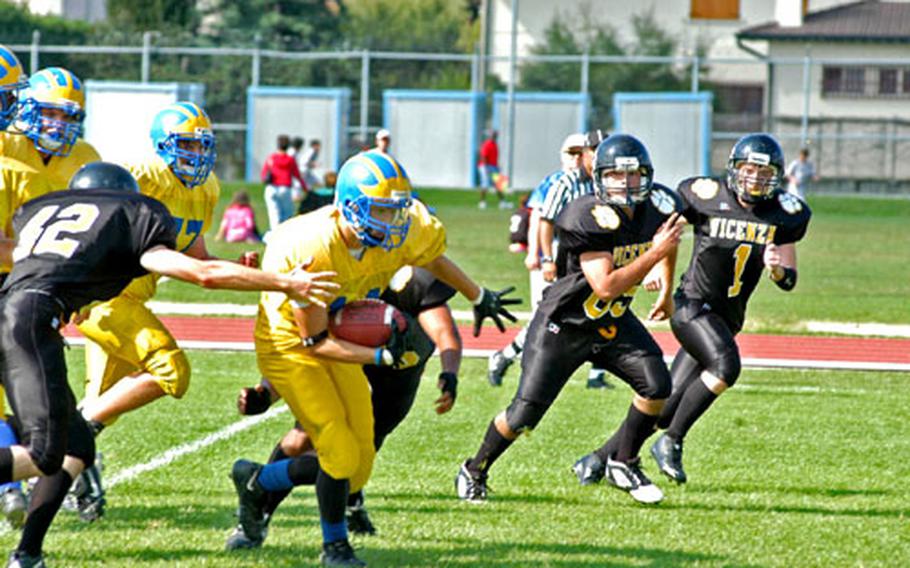 Running back Charles Melton, who spent a lot of time Saturday taking snaps as Ansbach’s backup quarterback, breaks through the Vicenza defense for a big gain. (Kent Harris / S&S)

VICENZA, Italy &#8212; As far as post-game celebrations go, it was pretty tame.

A few players tried to douse Ansbach football coach Marcus George with a water cooler &#8212; and mostly missed. That was about the only time Ansbach didn&#8217;t get it right in a record-setting victory over Vicenza on Saturday.

The Cougars from Germany proved to be way too much for the Cougars from Italy in a 68-0 victory, Ansbach&#8217;s 27th straight. The win eclipsed the DODDS-Europe mark for consecutive victories that Ansbach shared for a week with the Ramstein teams from 1994 to 1997.

The game was in doubt for about five plays Saturday, including the opening kickoff.

Vicenza received and started on its own 12-yard line. Quarterback Chris Weik was sacked for an 11-yard loss on the first play. Ansbach&#8217;s Zach Harmon tackled him in the end zone on Vicenza&#8217;s second, and the score was 2-0.

Ansbach (3-0) received the ensuing free kick and took over on the Vicenza 45. Xavier Sheppard took a handoff from John Willis and raced to the end zone. A two-point conversion followed, and it was 10-0 less than two minutes into the game.

Willis connected with Tyler Sherman for a 53-yard touchdown on Ansbach&#8217;s second possession. He found Harmon for a 5-yard touchdown pass the third time the offense touched the ball.

Charles Melton scored on a 4-yard run a few minutes later. Sheppard added a 7-yard touchdown run on the team&#8217;s next possession and Ansbach was up 38-0 &#8212; with 38 seconds remaining in the opening quarter.

That was about it for most of the Ansbach starters, who were sent to the bench for much of the rest of the game. Neither Ansbach or Vicenza could rest all its starters, though, because neither has that many players suited up.

While the Ansbach onslaught slowed, points still went up on the scoreboard. Josh Hale carried the ball in from 11 yards out and Gary Yonson added a 4-yard score. A two-point conversion made it 54-0 at the half.

Ansbach tacked on two more TDs in the second half.

Vicenza gained 23 yards in the first half &#8212; all in the air. In the second half &#8212; with the clock running faster than anyone on the field &#8212; a pass from Phillip Wiehe to Weik netted 26 yards and helped the team finish with 47 yards of offense.

Ansbach gained 502 yards, but no individuals really stood out because the ball was spread around so much.