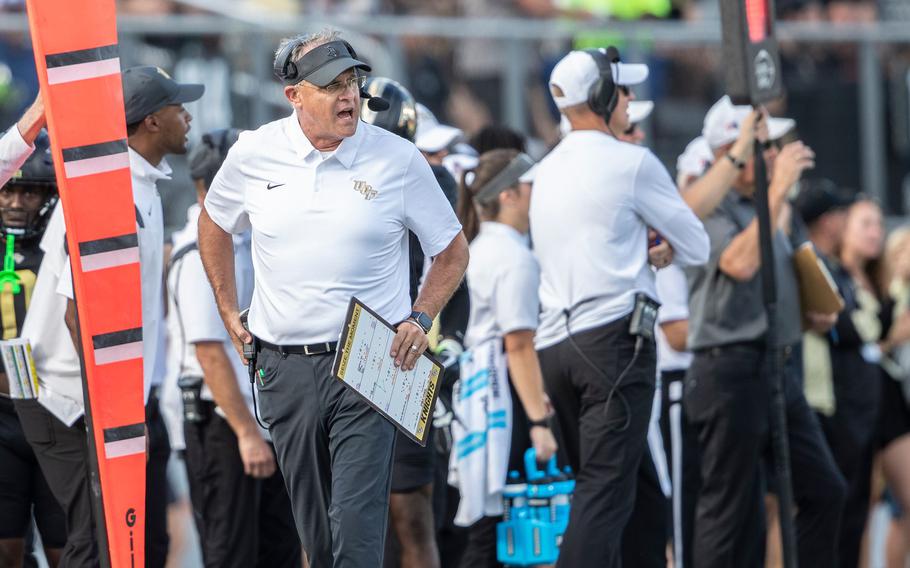 University of Central Florida coach Gus Malzahn said the cooler weather in Annapolis, Md., will be a factor when the Knights take on Duke in the Military Bowl. (Willie J. Allen Jr.)

That could change when the Knights travel to Annapolis, Md., for the Military Bowl vs. Duke on Wednesday.

“I’m hoping it snows,” Pauole said. “I’m not too shy of the cold but it’s going to be my first time [playing in the cold]. I know I’ll have the rubber gloves under my gloves, I’ll be Vaselined up, double-sleeves, ski mask on — everything.

“It’s all good though,” he added with nervous laughter.

Although the game is played on the campus of the Naval Academy, the Knights are staying in Washington, D.C., where they’ll arrive days ahead of the matchup with the Blue Devils to take part in the bowl experience.

Activities for the team include visiting the National Museum of African American History and Culture and assembling care packages for U.S. troops.

After the Knights get to the nation’s capital, the temperature is expected to lurk below freezing.

The forecast for game day in Annapolis includes a high of 48 degrees and a low of 29.

“It’ll definitely be a factor,” UCF coach Gus Malzahn said about the weather. “It’s going to be cold.”

Malzahn said the Knights will try their best to acclimate to the cooler temperatures in the three days leading up to the bowl.

“It’s part of football,” he said. “Our approach is: We’re going to be excited to play in that environment. We’ll get there, put the ball down and be ready to play.”

While Pauole has never seen snow or played in the cold before, quarterback John Rhys Plumlee has.

“I’ve played in the cold before coming from Mississippi, so it’s not really that cold,” the Hattiesburg, Miss., native said. “It’s football weather. At the end of the day, it’s still football. You’re still playing the same game. The temperature is just a little colder.”

Plumlee said it will be key for the Knights to stay warm on the sideline when not running around on the field.

“As a quarterback, you want to be able to grip the ball so you can’t let your hands and fingers get cold,” he said. “It’s stuff like that you don’t really have to worry about here in Florida, which is awesome, but when you go to the Military Bowl you definitely have to think about it.”

The senior quarterback, who announced recently he’s returning to UCF for the 2023 season, said he’ll likely wear a handwarmer around his waist.

“It has a towel on the inside of it,” he said. “I’ve always kind of had something around my waist, so in practice I’ve been doing [the same thing] with a handwarmer.”

As the Knights prepare for the cold, Pauole is dreaming of a white Christmas:

“I know it’s not that fun to play in but it would be cool to see.”