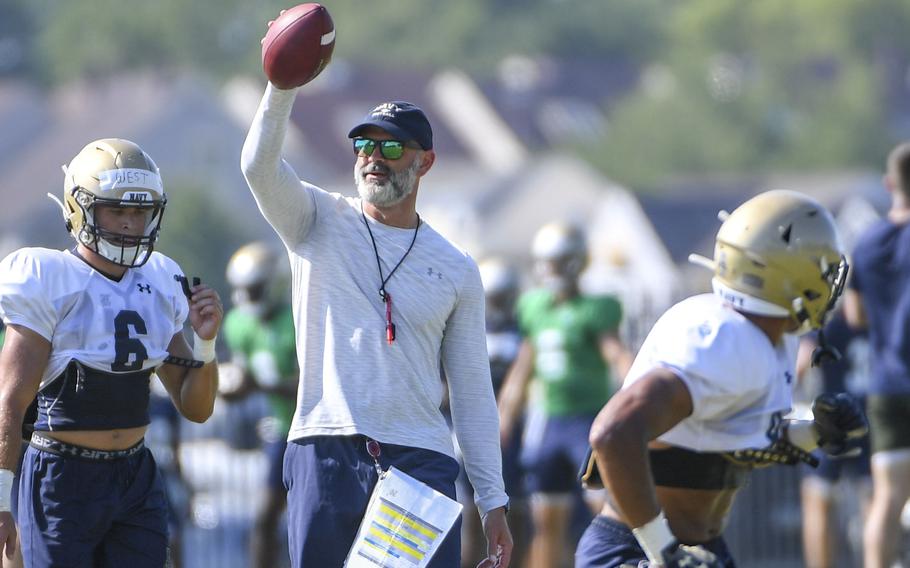 The Naval Academy didn't have to search far for its next head coach as it intends to promote defensive coordinator Brian Newberry, according to a person familiar with the decision. Athletic Director Chet Gladchuk named Newberry interim head coach following the firing of Ken Niumatalolo, who was let go after 15 years at the helm of the program.

"I like Brian. I like his style," Gladchuk said. "He gets the most out of his players. The defense was one of the top defenses in the country in terms of a run game. The athletes respect him. He's highly organized, coaching staff respects him. When you add all that up and you think about what I need right now is some stability, he just fits the bill.

"And I'd like him to manage the environment during the period of time that we're trying to create some direction."

The defense has been a bright spot as the team struggled the last several years. Newberry was hired in 2019 and remade a defense that, in 2018, ranked 86th in the nation in total defense, 90th in rush defense and 103rd in scoring defense. The Mids instantly improved to 16th in total defense, 10th in rush defense and 34th in scoring defense as the team went 11-2 and won the Commander-in-Chief's Trophy. Newberry was a semifinalist for the Broyles Award after the 2019 season, given to the best assistant coach in college football.

Navy ranked 33rd in total defense in 2022, sixth against the run and tied for 20th in sacks.

Newberry joined Navy from Kennesaw State, where he was defensive coordinator from 2015-18. He previously held the same title at Northern Michigan and the University of the South. Navy will name Newberry as just its fifth full-time head coach since 1990. The news was first reported by ESPN.

Last week, Gladchuk said the move from Niumatalolo had been under consideration for some time and that the coach had failed to meet "very reasonable goals." As athletic director for 22 years, he said the goals have been to win the Commander-in-Chief's Trophy and win six games to become bowl eligible. Navy just had its third consecutive losing season, finishing 4-8 for the second straight season, and Niumatalolo ended his time with a 109-83 record.