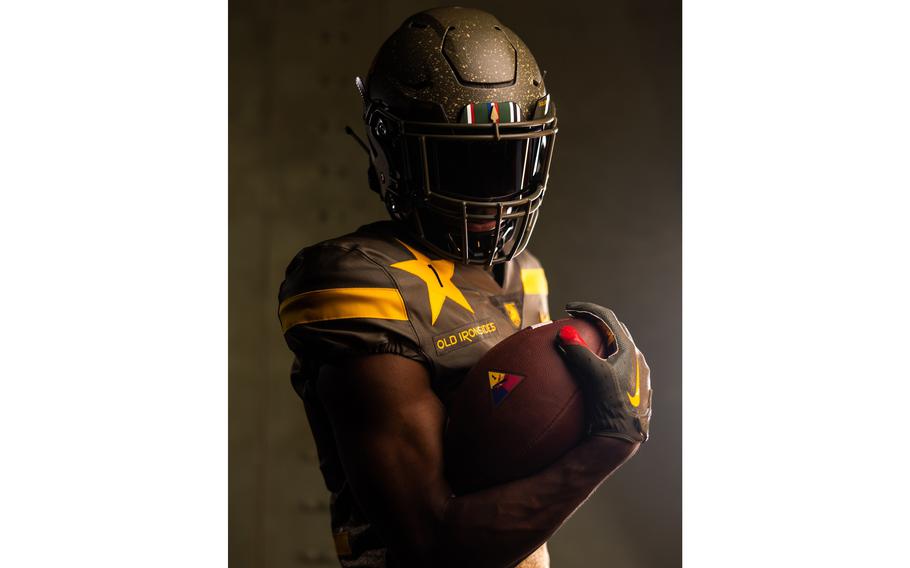 Army will honor the “Iron Soldiers” of the 1st Armored Division who spearheaded the first ground-based attack by the United States in World War II, and take the field in Philadelphia in uniforms inspired by the story of “Old Ironsides.” (Army West Point Athletics/Facebook)

(Tribune News Service) — Army football will commemorate a notable anniversary with specialty uniforms it will wear against archrival Navy on Dec. 10 for the annual rivalry game at Lincoln Financial Field in Philadelphia.

Army will honor the "Iron Soldiers" of the 1st Armored Division who spearheaded the first ground-based attack by the United States in World War II, and take the field in Philadelphia in uniforms inspired by the story of "Old Ironsides." In honor of their legacy, the Black Knights will wear patches and adopt their mottos for the meeting with the Midshipmen.

This year marks the 80th anniversary of Operation Torch, which began American ground operations against Axis forces in the European theater, which included North Africa.

Operation Torch marked the unit's entry into the crucible of combat. The resilience, grit and commitment demonstrated by the soldiers ultimately resulted in the defeat of Axis forces in North Africa.

That "Arcadia Conference" established the strategic framework for the next year and included the decision to have American forces launch a large-scale invasion of North Africa. It featured landings in the cities of Casablanca, Oran and Algiers.

Approximately 125,000 soldiers landed in Algeria and Morocco in November 1942 in what was then the largest amphibious landing in history.

Commanded by General Dwight D. Eisenhower, the operation was designed as a pincer movement with American landings at Morocco's Atlantic coast and Anglo-American landings on Algeria's Mediterranean coast.

On the night of Nov. 8, after undetected crossings from the United States and the British, a great Anglo-American fleet consisting of 350 warships and 500 transports carrying some 107,000 troops assembled off the coast of North Africa. The next morning, the Allied assault commenced as three task forces sought to seize key ports and airports at Casablanca, Oran and Algiers before advancing eastwards into Tunisia.

The invasion forces had to overcome French opposition in territories controlled by the Vichy Regime under Marshall Philippe Pétain. His government had some 125,000 soldiers stationed in Morocco, Tunisia and Algeria, as well as powerful coastal artillery, numerous tanks, aircraft and warships. Optimistic British intelligence predicted incorrectly that the French would offer minimal resistance.

In the harsh desert against a determined enemy, members of the 1st Armored Division were forged into "Iron Soldiers" and learned the lessons that would guide them to success in subsequent operations in Italy and Western Europe.

In a famous speech at the London Mayor's Day Luncheon, Churchill spoke of the symbolic importance of Great Britain finally winning on the battlefield thanks to the assistance of the Americans.

"We have victory — a remarkable and definite victory. The bright gleam has caught the helmets of our soldiers and warmed and cheered all our hearts," he said.

"The Germans have received back again that measure of fire and steel which they have so often meted out to others. Now this is not the end. It is not even the beginning of the end. But it is, perhaps, the end of the beginning."

This marks the seventh season that Army football and the United States Military Academy history department have collaborated with Nike on a specialty uniform for the Army-Navy Game. The Naval Academy announced last Monday its football team will wear astronaut-themed uniforms, which have been titled "From the sea to the stars."