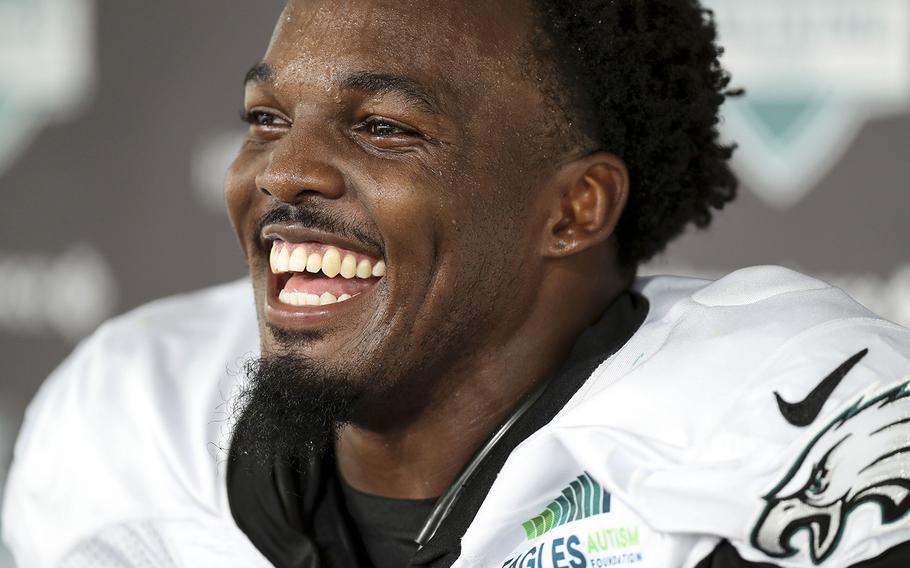 PHILADELPHIA  (Tribune News Service) — It's just past 8 p.m. when Nakobe Dean arrives home from the NovaCare Complex. The Eagles rookie linebacker typically caps his long workday with some form of advanced recovery treatment; on this Tuesday, he opted for a massage.

With his muscles feeling refreshed, Dean is eager to dive into last-minute film prep ahead of last week's game against the Houston Texans, which the Eagles won, 29-17. Although he hasn't played much on defense in Year 1, fellow linebacker T.J. Edwards says Dean "always prepares like he's the starter."

Between mental reps, Dean takes time out of his evening to discuss his upbringing, his passion with taking care of the youth, and an upcoming holiday that holds a special amount of significance to him.

Growing up in Horn Lake, Miss., Dean was raised by his mother, Neketta, in a single-parent household with his older brother, Nick, and his younger sister, Brooklyn. His mother served in the Army, and she made sure that hard-nosed discipline was rooted into Dean at a young age. As a professional athlete, the 21-year-old concludes nearly all of his interviews and conversations with a "yes, sir" or "yes, ma'am" while flashing his wide smile.

"There were no options to talk to me any type of way," his mother said. "It was always a sign of respect — yes, sir; yes, ma'am — I didn't play no 'huh,' 'naw,' or 'nah.' That was not an option. Showing respect to elders is definitely something that was instilled early."

Dean spent many of his childhood days tagging along with his mother at work. She'd often visit local nursing homes and U.S. Department of Veterans Affairs facilities, where Dean had the opportunity to interact with veterans. His mother recalled instances when Dean would approach elderly community members and offer to play them in a game of checkers. It was during these moments that Dean realized he could make a lasting impact on strangers and veterans.

"There were veterans and in-house patients that hadn't had anyone visit them in over a year," his mother said. "Going to the VA, going to the nursing home, Nakobe came in and he made a difference. It's very important to help others who are less fortunate than you. It was a reality check for him to see those little things meant a lot.

"He saw the impact of what comes from the heart reaches the heart."

Dean has always been naturally intuitive, according to his mother. When he was in the third grade, he would suggest different inventions he wanted to pursue. Dean also occasionally visited his father, Byron, who works as a doctor in Florida.

"He wanted to create a printer that you could use in your car," his mother recalled. "I had to tell him, 'Nakobe, they already have a wireless printer!' And then he would be like 'Mannnn, I want to invent something else then!'

His realization of wanting to help at a more impactful level occurred when Dean was in high school. During his visits with his mother at the time, Dean noticed several people with missing limbs. He would inquire and hear the personal stories from veterans on how they lost their arms and/or legs while serving overseas. Before beginning his college career at Georgia, Dean decided he wanted to pursue a degree in mechanical engineering. His overall goal in chasing this specific field was to design and build prosthetics for veterans.

"Veterans Day means so much to me," he said. "Those visits made me so grateful. I met all these people who put their lives on the line for the country. It was touching to learn about their battles and service. I thought, 'How will I be able to help them? 'How can I have a fraction of the courage that they displayed?' "

His dream of creating prosthetics is on hold, at least for now.

After starring at Georgia for three seasons, Dean was selected in the third round of this year's draft. Dean, who maintained a 3.55 GPA in the university's mechanical engineering program, said he plans to complete his degree and has even considered pursuing the medical field.

Dean is currently concentrating on uplifting his local community and excitingly spoke of the Student Health Impact Project's Best Year Ever School Tour.

Through the project, Dean is hoping to improve the quality of oral health care, and encourage early intervention with youth across Philadelphia. The student wellness initiative is geared toward educating, advocating, and connecting children and adolescents in Philadelphia to accessible health and dental care.

"It comes down to empowering the youth," he said. "I know I'm still young, but that's our future. I want to be able to show them that there's more to life than what a lot of them may see. I want to empower them to be great, let them know that they can achieve whatever dreams they have.

"For me, a smile is a big expression in itself. It shows the person you are, and the impact you can make by just brightening someone else's day. Since I was younger, I had a big smile and always tried to show all of my teeth."

As part of the campaign, Dean is visiting local schools throughout the season. During his pep rallies with the children, he held a Q&A with an emphasis on the importance of health and education. Last month, he visited C.C.A. Baldi Middle School in Northeast Philadelphia, where he was taken aback by the reception from students in attendance. At the conclusion of the event, Dean spent extra time thanking each child and reminded them that they all "have a purpose."

"This is something that I'd be doing if I didn't even have the platform that I have," he said. "I know I probably wouldn't be able to do it to the magnitude that I'm doing it, but even if I wasn't a professional football player, I'd want to give back to the community in some type of way. It's not anything that even involves me, it's just something that we're supposed to do — giving back to the community and making sure others are taken care of."

On the field, Dean has maintained patience while playing behind starting linebackers Edwards and Kyzir White. It's been a drastic change of pace after he was the recipient of the 2021 Butkus Award as college football's best linebacker. Dean, who was widely considered a first-round prospect until a report surfaced that he had sustained a pectoral injury and declined surgery, also earned All-SEC first-team honors and served as a team captain with Georgia storming to a College Football Playoff national championship.

"From Day 1, he's fit right in," Edwards said of Dean. "He's got an awesome personality, just a really good person. The one thing that I definitely respect about him, he just loves football, he's a football guy. He's very funny. He brings a lot of personality to our room."

At some point over the past month, Dean approached former Georgia teammate and current Eagles defensive tackle Jordan Davis. It's been quite the contrast for each player in regards to playing time. Prior to sustaining his high ankle sprain, Davis' reps were increasing each week as he earned a more prominent role in the defense. Meanwhile, Dean's role has been relegated to mostly special teams, with Edwards and White playing together at a high level. During his conversation with Davis, Dean peppered his close friend with questions about what he observed from the sideline.

Such is the mindset of Dean, an eager learner who's waiting to make his difference on the field, while already generating an impact away from it.

"I think the impressive thing about him is he prepares every week like he's the starter," Edwards said. "That's something you want from a teammate. He's locked in the entire week. He knows all of the strategies with everything that we talk about. He's handled everything thrown at him, he just has a really high IQ."

Said defensive coordinator Jonathan Gannon: "Behind the scenes, this guy improves every day. He's playing scout team, as well, like all our [second-teamers], so he's getting time on task into our calls with what we have up in the game plan. When we need him, Nakobe will be ready to go."