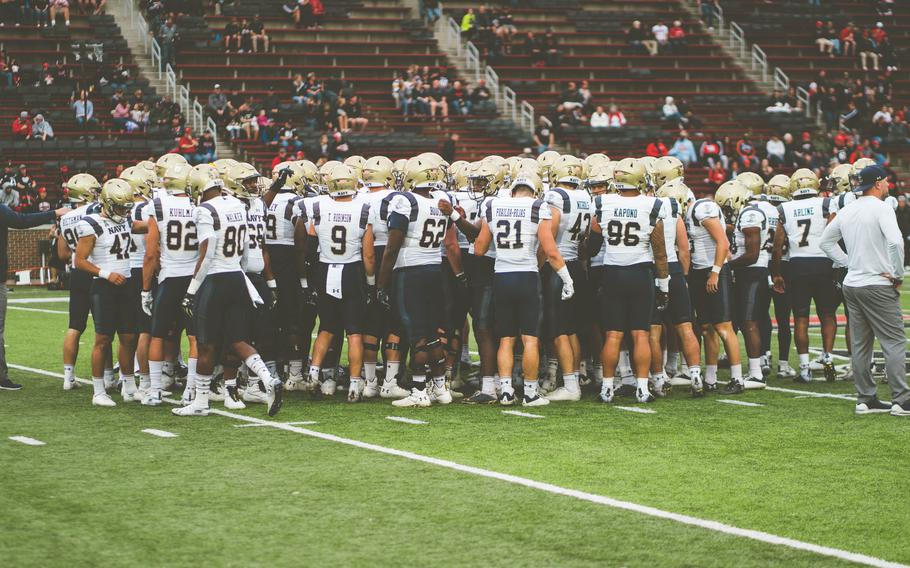 This will be the 95th meeting between the Midshipmen and Fighting Irish, who lead the all-time series 80-13-1.

Up until two years ago, it was the longest continuous intersectional rivalry in college football. However, the worldwide pandemic forced cancellation of the Navy-Notre Dame game scheduled for the 2022 season opener in Dublin, Ireland.

History was slated to be made when it was announced the Midshipmen would host the Fighting Irish at Navy-Marine Corps Memorial Stadium instead. However, scheduling restrictions placed upon Notre Dame by the Atlantic Coast Conference prevented that from happening.

There is a reason why these two institutions have met on the gridiron every year (except 2020) since 1927. During World War II, Notre Dame’s student population dwindled to 2,623 students, causing the university serious financial issues.

In April 1943, the United States Navy created the V-7 Indoctrination School at Notre Dame and 900 men were enlisted. That government contract paid the university located in South Bend, Indiana, nearly $488,000 for infrastructure needs and administrative expenses.

“All I can say is without Navy during the war, this institution would have gotten down to a few hundred students. Instead of that, we were almost twice our normal size during the war and we were able to contribute something to the Navy,” said Father Edmund Joyce, the late Notre Dame vice president.

Notre Dame has never forgotten the Navy’s kindness and support during its time of dire need and vowed to maintain an annual football rivalry for as long as the academy wished to play.

“The history of this rivalry is pretty special. It shows what both schools are all about,” Navy coach Ken Niumatalolo said Monday during his weekly news conference.

“There are a lot of [schools] that want to play Notre Dame and we’re grateful for a chance to play such a historic program. We just wish we had a couple more [wins] on our side of the ledger.”

Navy coaches have always used the Notre Dame series as a recruiting tool. Telling prospects they will get to play one of the most legendary programs in college football four times — twice at fabled Notre Dame Stadium and twice in NFL venues — is persuasive.

Many critics called for an end to the lopsided rivalry during Notre Dame’s remarkable 43-game winning streak against Navy. While the Midshipmen had many near misses, most of the games were blowouts by the Fighting Irish.

Navy brought an abrupt end to that ignominious losing streak, longest in the history of college football, in 2003. The Midshipmen did so in dramatic fashion, pulling out a 46-44 victory in triple-overtime.

Niumatalolo has enjoyed relative success in the series. In 13 games, he’s beaten Notre Dame three times and had four losses come by 10 points or less. Niumatalolo is tied with College Football Hall of Fame head coach Wayne Hardin for most wins against Notre Dame in Navy football history.

“It’s exciting to be able to play in Baltimore, which is really close to the Naval Academy. We enjoy playing up there. It’s always a great venue with a great atmosphere,” Niumatalolo said. “We also recognize there will be a lot of Notre Dame fans, too.”

Notre Dame (6-3) is under the direction of first-year head coach Marcus Freeman, who was promoted from defensive coordinator after Brian Kelly left for LSU.

The Fighting Irish started the Freeman era with two straight losses, including a 26-21 upset to Marshall. However, Notre Dame has won six of its last seven, with last Saturday’s 35-14 rout of formerly fourth-ranked Clemson certainly catching the notice of the Navy coaching staff.

“It looks like they’ve really picked it up lately,” Niumatalolo said of the Fighting Irish. “Obviously, the thorough beating they gave Clemson was very impressive.”

Linebackers JD Bertrand and Jack Kiser anchor a Notre Dame defense that ranks 27th nationally in both total yards (328.60) and points allowed (21.2). Meanwhile, the offense has come to life, scoring between 35 and 45 points in four of the last six games.

“They’ve been pretty stout defensively the whole season. It looks like they’re catching their groove offensively and have kind of found their identity,” Niumatalolo said.

Notre Dame has now won 16 straight games during the month of November, the longest such active streak in the Football Bowl Subdivision.

Junior quarterback Xavier Arline will make his second straight start for Navy (3-6), which is coming off a 20-10 loss at Cincinnati. Arline brings more of a perimeter element and home-run threat to the position, breaking loose for runs of 32 and 29 yards Saturday afternoon.

Arline played the entire second half of last season’s 34-6 loss to Notre Dame in South Bend. He was tackled for a safety after recovering his own fumble in the end zone.