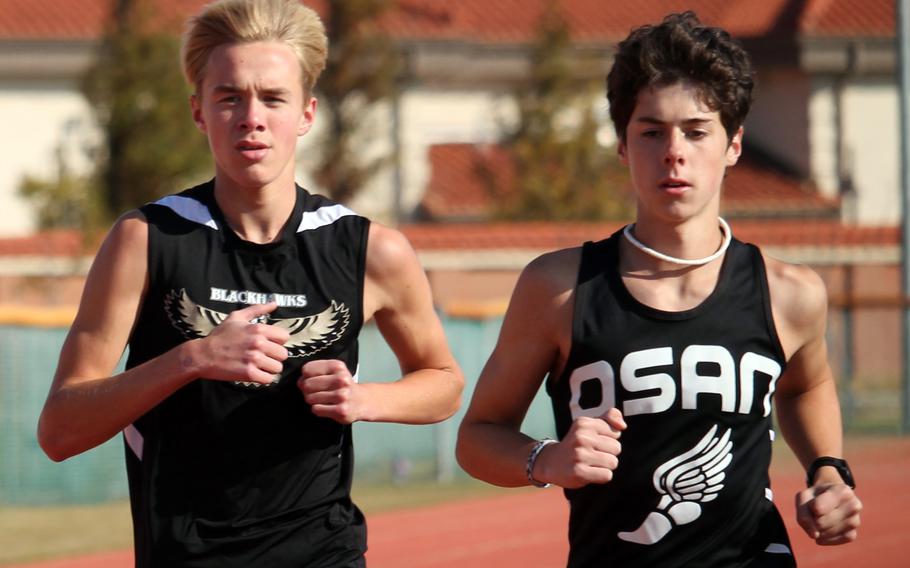 It was almost like a rite of passage on Korea’s cross country courses this fall: Sam Wood and Drew Wahlgren would run together for most of the races, with Wood, an Osan freshman, finishing first and Wahlgren, a Humphreys junior, taking second in almost every race.

“He is dedicated and trains to the detail; the struggle was getting him to take it easy,” said Wood’s coach, Trabille Cobb. “He would set a goal for race day, create a plan and then [set a personal record].”

Wahlgren, who had set a school record with a 16:54 on Oct. 15, became the first Humphreys runner to win a D-I virtual title, despite being out with the flu the week before the meet.

“He came back and crushed it,” Blackhawks coach Amy Gleason said. “The Humphreys coaching staff couldn’t ask for a better athlete than Drew.” 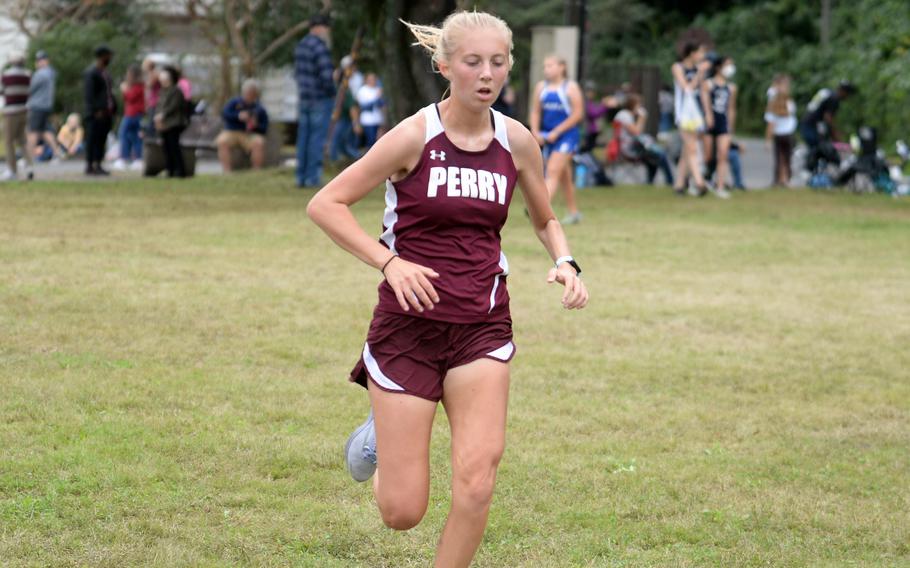 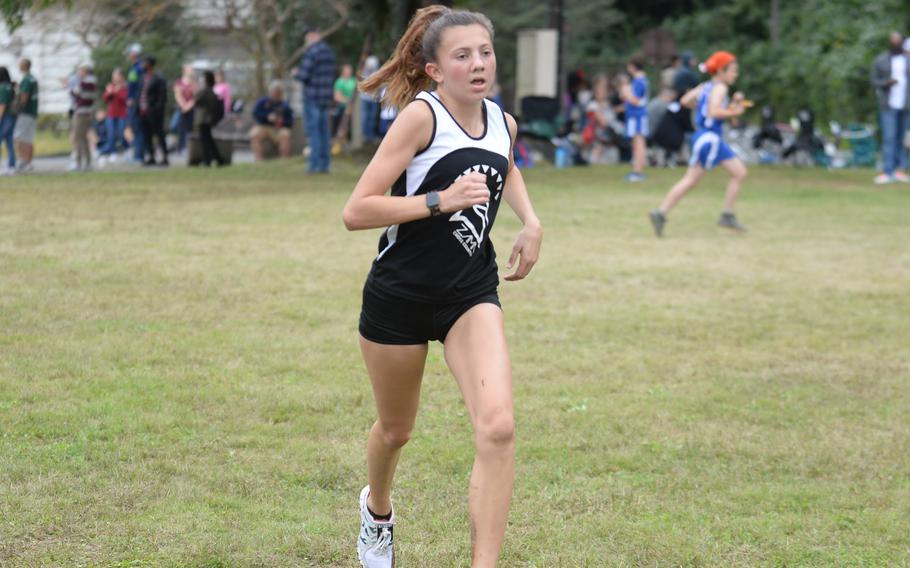 “I think they surprised even themselves,” Kinnick coach Luke Voth said of his team, which had just two girls and one boy returning. “They worked hard and gave themselves a chance by the end.”

“I’m going to savor this one,” Perry coach Brad Cramer said of the school-first. “I’m excited. They put their work in, they peaked at the right time. For small-school Perry, this was huge for us.” 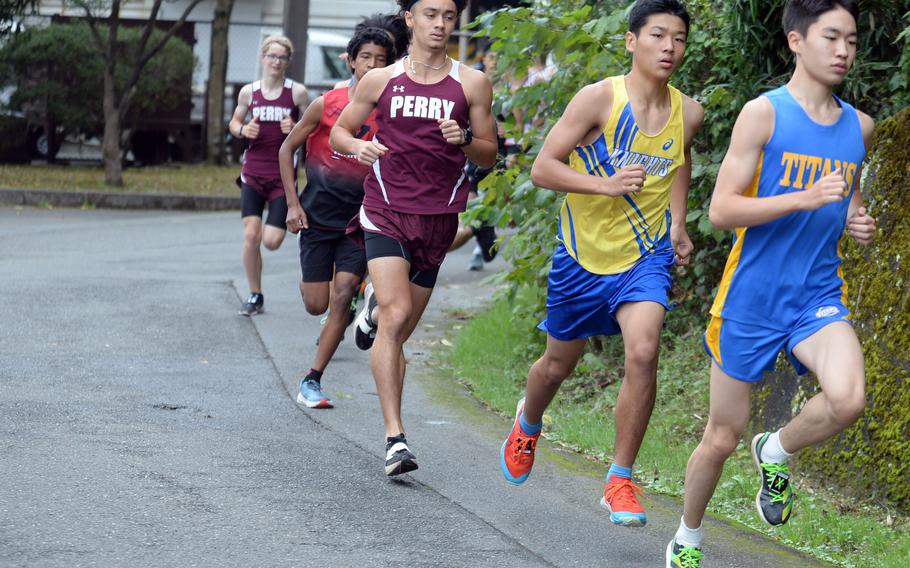 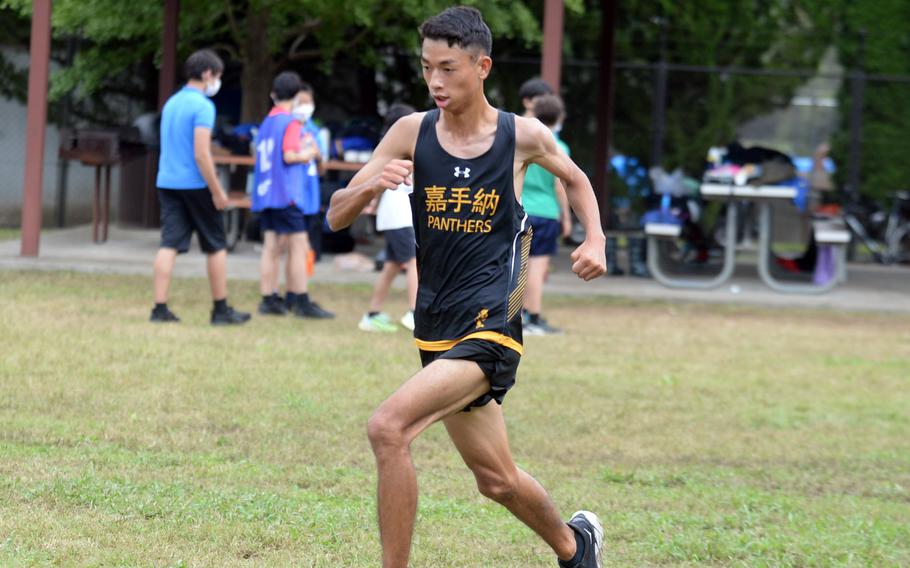 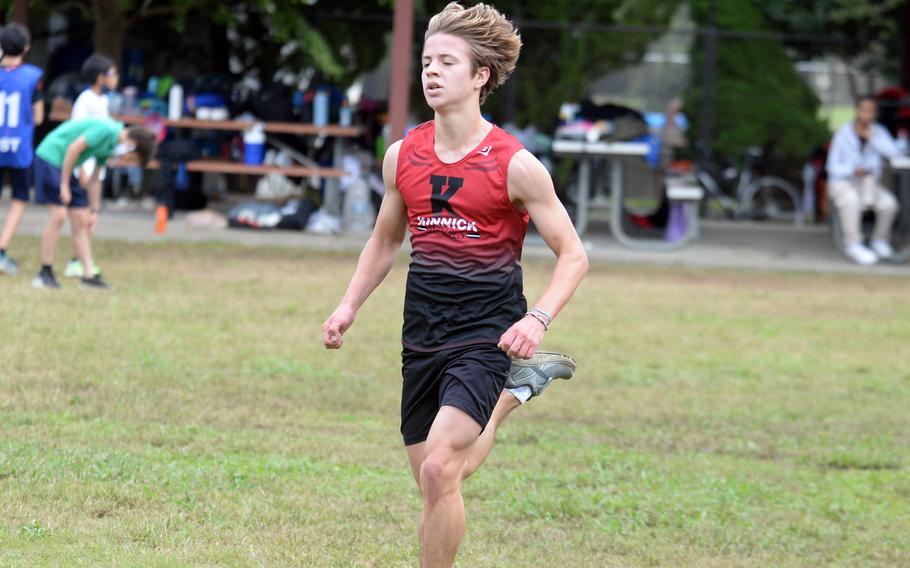 Under the Far East virtual format used the last three years due to the coronavirus pandemic limiting travel, each school ran on regulation 400-meter tracks, seven boys and seven girls each, five runners scoring and the others pushing for a total of 12½ laps.

Schools that did not have a regulation track ran on similar surfaces approved by DODEA-Pacific. Schools ran their qualifiers between Oct. 24-26, then turned those times in to DODEA-Pacific, which announced the results Thursday.

Osan and Humphreys were back to running in Korean-American Interscholastic Activities Conference races this season and Wood and Wahlgren were like unofficial training partners, coaches said.

“I appreciated having Sam to run against all season,” Wahlgren said. “It kept me motivated to make me try for a sub-17,” which he did Oct. 15 at Humphreys. “I had no idea I’d broken the school record or won Far East until the principal made an announcement during my Korean class.”

Wood posted a 16:36 in the same Oct. 15 meet that Wahlgren went under 17 minutes for the first time. “He tries to do his best every single day and realizes that it takes hard work and commitment to achieve the results he desires,” Cobb said.

Bartram took fifth in the virtual Far East a year ago as a freshman. Eternally chipper, always smiling, Bartram is “100 percent positive all the time,” Voth said.

“Kids like that rarely, if ever, have bad practices or races,” he said. “Whatever she’s doing, she’s all in. She works hard and looks for every opportunity to improve. Her mind and demeanor is always positive and that has a way of affecting everything she does.”

As for Williams, she beat her previous best by 40.9 seconds.

“Jane was amazing,” Cramer said. “She was flying. She was so smooth.”

DODEA-Pacific officials said they’re hoping this will be the last of the virtual Far East meets. The 2023 Far East in-person meet is tentatively scheduled for Oct. 23-24 on Misawa Air Base, Japan.